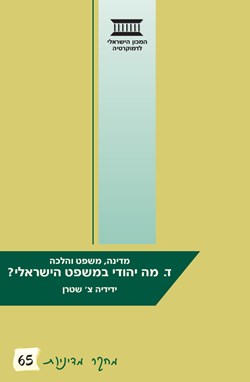 This policy paper offers an in-depth analysis of the relationship between Jewish Law and state law in Israel, and its influence on democracy, society, culture and religion.

How does Israeli law synthesize the democratic and Jewish worldviews? What do each of them contribute to the whole, and how can the conflicts between them be resolved? From these questions stem a delicate balance between three critical models of relationships with significant potential for political influence: between the state and its observant citizens, between the state and its secular citizens, and between the state's observant and secular citizens. This paper offers an in-depth investigation of the relationship between Jewish Law and state law in Israel, and its influence on democracy, society, culture and religion.

Israel is defined as a Jewish and Democratic state. It has a binary civilizational affiliation – the liberal-Western and the Jewish-traditional. Therefore, it would seem natural that Israeli law will express a unique choice of values, blending and merging the best of the two different cultural sources. Unfortunately, this is not the case: Israeli Law stresses the democratic nature of the state but it fails to convey the Jewish aspect of the Israeli experience.

This reality is fueling an ongoing demand by some Israelis for enhanced influence of traditional Jewish Law (Halakhah) on modern Israeli Law. The demand stands at the center of an unresolved debate regarding religion, culture, society, and politics, conducted sharply among Israelis for the past 80 years. It is around this issue which most of the tensions between religion and state in Israel are woven.

This paper presents three models offering possible relationships between Halakhah and modern Israeli Law: The model of assimilation, which endeavors to transform as many Halakhic norms as possible into binding norms according to Israeli secular law; the model of autonomy or legal pluralism, which suggests a coexistence of Israeli Law and Halakhah so that both systems will be enforced equally by the state on different communities (Halakhah on the religious community and secular Israeli law on the seculars); and, the model of inspiration or the critical model, which rejects any coercion of the religious aspect of Halakhah, but stresses its cultural significance for our generation.

The paper addresses the advantages and disadvantages of each of these models from religious, democratic, and cultural points of view. The analysis shows the defects of the first two options and demonstrates the possible important role that Halakhah can serve, according to the inspirational model, in the secular State of Israel. For more than a generation now, Israeli law has been influenced by American law and culture. Halakhah can play the role of a critical substitute. It can function as an open invitation to the 'good life' and the 'good society' for the citizens of the Jewish state. It has a great potential to help Israeli society shape the social ethos it deserves. An honest and serious search in the courtyard of Jewish civilization can unearth rich minerals which can be a source of legal inspiration to the Israel of the twenty-first century.