The upcoming High Holidays are an opportunity to expand our perception beyond our selves and communities. This article was first published by the New York Jewish Week. 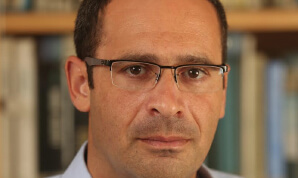 The Unetanneh Tokef prayer we recite on Rosh Hashanah is the most moving part of the High Holiday liturgy. It includes the following sentence that describes a vision of divine judgment to take place on the first day of the Jewish New Year: “All humankind will pass before you like a flock of sheep.” In other words, God’s judgment on Rosh Hashanah extends not only to Jews and the Jewish people, but to the entire world. The day has universal significance. The upcoming High Holidays are an opportunity to expand our perception beyond our selves and communities.

Rosh Hashanah and Yom Kippur, known collectively as the yamim nora’im are an opportunity for Jews around the world to unite in some serious soul-searching.

In recent years, the world’s two largest Jewish communities, in Israel and the United States, have grown apart. There are many reasons:

One major factor are the different processes Israeli society and American Jewish communities are undergoing vis-à-vis tradition and the Jewish religion, as well as the relationship between Jewish tradition and universal values. On the one hand, Israel is moving toward increased support for Orthodox interpretations of traditional Jewish values, sometimes in direct contrast to what could be considered universal values of human rights. On the other hand, it has become increasingly common for American Jews, who belong predominantly to non-Orthodox communities, to put universal values above Jewish particularism, sometimes citing Jewish sources as their reason for doing so. This is especially true of young people, who look at the “occupation” or certain actions by Israel in the West Bank and Gaza with tunneled vision, fed by mainstream media. This can make it difficult for these individuals to feel solidarity with the State of Israel.

Another factor affecting American Jews’ sense of solidarity with Israel is the relationship between religion and state in Israel. The ultra-Orthodox Chief Rabbinate controls the definition and sets the boundaries of Judaism. Basically, it has the power to decide who is a Jew. It also has the authority to determine the validity of Jewish marriages in Israel. On top of that, Orthodox officials in Israel not only do not recognize non-Orthodox movements and their theological views, but are also fighting hard against non-Orthodox influence in the public sphere. This can be alienating and demeaning.

Sadly, the inability to come together seems to be cultivating a bizarre and baffling indifference in Israel by Jews in general and politicians specifically.

However, American Jews are motivated and in a position to influence what goes on in Israel. In fact, led by the Jewish Federations of North America, leaders of the pluralistic streams of Judaism, foundations, and private donors, U.S. Jews have been working to solidify a broad base of support for liberal ideas in Israel. These movements are working to change Israel’s approach to democratic values and the issue of religion and state. Admittedly, until now, success has been limited.

"In recent years, the world’s two largest Jewish communities, in Israel and the United States, have grown apart."

These days of judgment are thus an important opportunity to engage in soul-searching on both sides of the ocean. On the Israeli side, the first thing we need to do is recognize the importance of the American Jewish community to the Jewish people and the State of Israel, and listen closely to its needs and feelings. This utter disregard for half of the population of the Jewish world cannot continue.

At the same time, the American Jewish community must be aware of the changes that are going on in Israel and find a middle ground, between the desire to effect change and influence processes and the willingness to understand and accept Israel, even if it doesn’t make all the changes diaspora leaders are requesting.

Maintaining and strengthening this bond among Jews is the sacred responsibility of Jews everywhere. As such, the road to change must go through dialogue and efforts to find the shared and unifying elements on both sides, while accepting the inevitability of differences and change. The American-Israeli link is vital to the continued existence of the Jewish people.

This article was first published by the New York Jewish Week.