On July 9, 2014, as Israel prepared for a ground incursion in Gaza, Col. Ofer Winter, commander of the Givati Brigade, sent a letter to his subordinate officers, which was criticized for its religious content. In the lines below, Prof. Mordechai Kremnitzer discusses the appropriateness of the content of the letter. 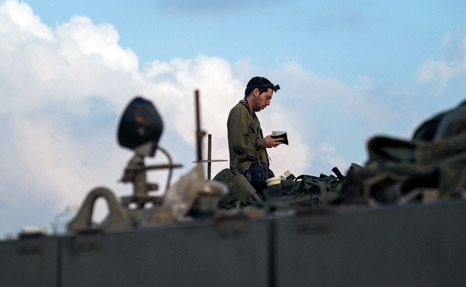 Colonel Ofer Winter is an outstanding IDF officer, among the country’s finest sons. During the past summer he and other IDF commanders and soldiers placed their lives in peril and endangered themselves in order to safeguard the welfare of Israel’s citizens and the security of the state. The gratitude we all owe them is incalculable.

Despite the above, as citizens of a democratic country, we are not absolved from addressing the question of whether statements such as those in Ofer Winter's "commander’s letter"—a dispatch that he distributed to the soldiers of the Givati brigade prior to their entrance into Gaza during Operation Protective Edge—are appropriate. The focus of this discussion is not Col. Winter himself, but rather, the specific content of the letter he issued before the military operation.

Col. Winter’s Letter in the Context of the IDF’s Growing Religiosity

Even now, after the cease fire, the question of the appropriateness of the letter warrants discussion, especially in the context of how it ties in with the trend of the army’s growing religiosity, or religification. A detailed discussion of this trend is beyond the scope of this article; we will suffice with recalling the meetings of IDF rabbis with combat forces during Operation Cast Lead (January 2009); military gatherings, ceremonies, and educational activities in which religious content had a prominent place; the controversy over women's singing at IDF events, and more.

The problem is not just that this type of system of influence was brought to bear upon soldiers, who are a totally captive audience. It is that the messages that are being transmitted are often characterized by extreme particularism, which is not at all balanced by universalism. One of the problematic and serious manifestations of this particularism is the exclusion of women and the harm it causes to female soldiers in service. It is important to keep in mind the nature of the audience that is being subject to these influences and the context of the framework in which they serve. Young Israelis enter military service following education in educational systems that systematically neglect the humanistic perspective and stress Jewish uniqueness. By its nature, the military framework emphasizes the nationalistic spirit vis-à-vis the relevant "other"; that is, the enemy or someone suspected of being such. It is also a highly hierarchical framework that does not encourage freedom of thought and criticism, in which the influence of indoctrination by the military command is particularly significant. Religious texts and content speak to these soldiers not only with the authority of the military command but also with the authority of the binding, immutable holy Torah. Within this context, messages about Jewish superiority and demonization of the enemy are fertile ground for fostering brutality and releasing soldiers from moral constraints.

Furthermore, there is a direct relationship between the degree of the army’s “religification,” the democratic character of the state, and the ability and willingness of authorized officials to make fateful decisions about the state’s future. The more religious the army becomes, the greater the danger that legal decisions requiring evacuation of Jewish settlements in the territories will not be implemented due to rabinically-sanctioned insubordination—or even worse. (This is not a prediction for the future; directives to refuse to obey orders have already been issued by rabbis in the past.) The implication is that in practice, the sovereign freedom of citizens in a democracy to make decisions about crucial issues, via their representatives, is already curtailed at the outset, due to the fear of being confronted with a schism of unparalleled proportions.

The political nature of these developments should not be ignored. These moves are directed by the religious Zionist camp and serve its political needs. This is politicization of the army at its most glaring, and is using the army for political indoctrination, to gain adherents to a certain political-ideological worldview and, indirectly, to a particular political movement. There is nothing more contrary to the military’s status as an institution of the state that is meant to represent all. The lengths to which the state has gone on this issue can be seen from the establishment of the Jewish Identity Administration, headed by former IDF chief rabbi Avichai Rontzki, within the Religious Services Ministry. The Israeli taxpayer is supporting the cultivation of a very specific kind of Jewish awareness, such that those who were under Rabbi Rontzki’s sway in the military will again be subject to his government-supported influence in civilian life, driven and led by religious Zionism.

Col. Winter’s letter would never have come into this world were it not for the above antecedents. This illustrates the problematic nature of the army’s growing religification.

The letter that Col. Winter distributed to his soldiers included the following:

"I lift my eyes up to the heavens and call out, together with you: "Hear O Israel, the Lord is our God, the Lord is One." Lord, the God of Israel, grant success to the path on which we are setting out to do battle on behalf of Your nation Israel against an enemy that blasphemes Your name. In the name of the IDF fighters, and specifically the fighters of the [Givati] brigade and its commanders, may God act and fulfill through us the Biblical verse: "The Lord your God goes with you to do battle against your enemies to save you," and let us say Amen."

The letter also referred to the war as being waged against the "Gazan terrorist enemy" that "curses, reviles, and defames the God of the battles of Israel." It makes no mention of Gaza’s civilian population and the obligation to prevent them from unnecessary harm.

The statements above, which we assume were written in good faith and with good intentions, in order to fortify the spirit of the soldiers as they go out into battle, are problematic from several perspectives:

Beyond the statements described above, the letter also included the following: “We will do everything possible to succeed in our mission in order to destroy the enemy and remove the threat from the nation of Israel… We will do all we can in order to ensure that our boys come back safely, using all means at our disposal and all the force necessary.” But the letter did not include a statement that it is a duty to refrain from inflicting harm when there is no critical military justification for doing so and that it is a duty to ensure that the action meets the criteria of proportionality among civilian populations. Consequently, the following question is unavoidable: Was all that was necessary done in order to avoid harming civilians not involved in combat?

The nature of fighting in Gaza, in built-up residential areas where terrorists and civilians are intertwined, at times deliberately on the part of the terrorists, presents a significant danger to both soldiers and civilians. We cannot take for granted that each and every Israeli soldier values the life of Gaza's civilians. Under these circumstances, it is extremely tempting to try to prevent any degree of danger to our soldiers at the expense of moves and actions that create great danger to the lives of uninvolved civilians on the other side. It is not possible to have a moral army and at the same time to allow this temptation to guide the military operation. Commanders’ letters must clearly address the duty to prevent unnecessary harm to civilians.

The IDF commanders and the government, to whose authority the military is subject, cannot allow themselves to ignore the change taking place in the army right in front of their eyes. Turning a blind eye and conducting “business as usual” are the opposite of what is required of leadership. It is not too much to expect that those who demonstrate military courage will also demonstrate the civil courage necessary to address this problem.