In an article in the Jewish Week, IDI Vice President Yedidia Stern discusses the question of whether it is appropriate for commanders to use religious rhetoric in motivating their soldiers, and stresses the need for the Israeli army to represent all. 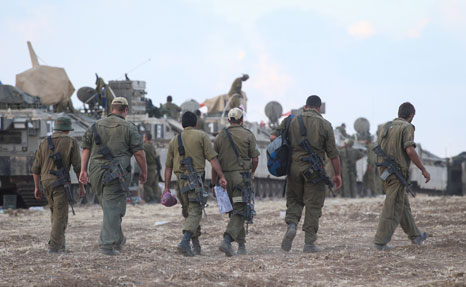 The Defense Minister and Chief of Staff recently expressed cautious reservations about the religion-infused letter that the commander of the Givati Brigade wrote to the officers under his command at the outset of Operation Protective Edge. The commander letter defined the mission of his troops in religious terms: defeating a blasphemous enemy who defames God’s name. Unlike the usual discussions about the points of contact between the Israeli army and religion, which tend to focus on the practicalities of daily life in the Israel Defense Forces, in this case we are dealing with a fundamental question: What is the IDF’s combat ethos? Did the commander letter conform to the IDF's Code of Ethics (Ruach Tzahal – literally "The Spirit of the IDF"), which states that the army’s goal is “to protect the existence and independence of the State of Israel,” subject to “the directives of Israel's democratic civilian authorities and the laws of the state”?

The Givati Brigade commander, naturally, does not see a conflict between the IDF Code of Ethics and the commander letter he issued; after all, someone who sees the state as sacred will understand the defense of the state as a religious mission. But despite the subjective honesty of this position, it should not be accepted.

In order for the discussion that follows to be productive, we must first dispel a number of misconceptions. First, the massive enlistment by members of the Religious Zionist community in army positions that require an increased commitment—over 40 percent of the cadets in officer training courses come from the Religious Zionist community—is not part of a conspiracy to carry out a "revolution of faith" and to turn Israel into a theocracy. The young people who enlist in these army tracks have been brought up to respect the authority of the state  and find it natural to uphold “the laws of the state and norms of human dignity, and… the values of the State of Israel as a Jewish and democratic state,” in the words of the IDF Code of Ethics. While the State-Religious school system is not perfect and has room for improvement, the incredibly restrained response during the disengagement from Gaza, when the Religious Zionist sector was largely unmoved by the irresponsible rabbis who deluded the public with assertions that “it will never come to pass,” is proof that this community has internalized the principles of democracy.

We must also refute false claims to the opposite effect: Despite whispers to the contrary in some parts of the Religious Zionist camp, observance of the commandments is not a barrier to obtaining national leadership positions. The fact is that Religious Zionists are being integrated naturally into the leadership of Israel in all areas—national politics, the judicial system, the media, and even the military. Today’s religious brigade commanders will be integrated in the leadership of the General Staff in the future in accordance with their talent.

Having rid ourselves of these exaggerated fears, we must now consider how we can maintain a national army whose soldiers come from a multicultural society brimming with controversies and conflicting visions. Ben-Gurion dismantled the Palmach and sank the Altalena in order to establish the IDF as Israel's national army. What is the equivalent action in our generation?

At the level of the individual, the IDF must internalize the reality of a multicultural society and provide every soldier with conditions of service appropriate to his or her cultural and religious preferences. (The implementation of this principle is difficult when there is a clash between the preferences of different individuals, but that is a topic for separate discussion.)

At the public level, the matter must be decided once and for all: The supremacy of the state ("mamlachtiyut") must be the highest order. The preferences of individuals must not be allowed to take control of the public military sphere. This space includes physical components (military bases), symbolic elements (ceremonies), disciplinary dimensions (orders and hierarchies), educational components (an ethical code and an educational system), and, of course, questions of ethos and meaning. But what is the practical meaning of the supremacy of the state? What values does this state stand for? It is derived from the constitutional definition of the State of Israel as “Jewish and democratic” and is reflected in the IDF Code of Ethics. As such, the Code of Ethics—the "spirit of the IDF"—must include expressions of the values we hold as Jews. But that is a far cry from saying that the actions of the IDF must be based on religious beliefs in a concrete manner. That is, in my opinion, a giant leap.

Purging the public military sphere of sectoral particularism is necessary for both practical reasons and reasons of principle. In terms of principle, a liberal state is entitled to require its young people to perform military service only if it makes sure that the military operates according to values that enjoy a broad consensus. In terms of practical considerations, the ability to allocate national resources to a given cause in a divided society depends on the public’s belief that the sacrifice is justified. Soldiers will hesitate to charge into battle if they are alienated by the particular flag their commander is waving.

The Givati Brigade commander inserted his beliefs—which I personally share (his command letter brought tears to my eyes)—into the public sphere of the IDF. It's important for him to learn: the more senior a commander, the greater the obligation to conceal his or her personal identity in order to guarantee that the Israeli army represents the state. Without such representation, the army cannot function.

The uniform of a senior officer, like the robe of a judge, is a symbol that the officer is acting on behalf of the national interest, as defined by the democratic system as a whole. The commander letter issued by the Givati Brigade commander unraveled the fabric of this decorated officer's uniform and damaged the spirit of the IDF.

Yedidia Z. Stern is Vice President of Research at the Israel Democracy Institute and a professor of law at Bar-Ilan University.