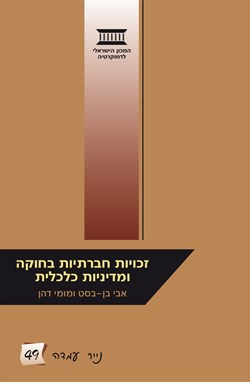 Since the founding of the State of Israel there has been considerable public debate concerning the need for a constitution. The Basic Laws passed since 1992 are important milestones in the development of the constitution, but do not include aspects that are customarily included in other constitutions. The “Constitution by Consensus” team established by the Israel Democracy Institute is working to develop a comprehensive proposal for a constitution. This volume provides the infrastructure for considering whether social rights should be included in the constitution, and if so, what should be the desirable level of commitment.

A constitution is not the only arrangement by which a system of government can influence social rights. Reinforcing the democratic process by providing due representation for the underprivileged may also serve to protect such rights. While the political power of the underprivileged may prevent excessive inequality in the long term, the opposite also applies. A low level of inequality tends to reduce social tensions, increase political stability, and stimulate economic growth.

It was once assumed that income equality may harm economic growth. The evidence of recent years has shown, however, that in most cases inequality hinders growth. Income equality, growth, and democracy thus go hand in hand. The second chapter of this book analyzes these interrelations as part of the infrastructure for examining whether social rights should be included in the constitution, andwhat the level of commitment should be.

The need for a constitutional commitment to social rights also depends on the level of inequality in society. Those advocating the inclusion of social rights in the constitution see this as part of the protective net of basic human rights, and one of the safeguards against excessive inequality. The need for such a safeguard is greater in a society characterized by profound gaps in wealth and opportunities. The third chapter examines the sources of inequality in Israeli society.

It is also important to ascertain the sources of inequality in Israel in order to adopt a stand regarding the level of constitutional commitment to social rights. Determining a scale for this depends on considerations of principle as well as on the access accorded under current arrangements in the absence of a constitution. The stand taken will depend on whether these arrangements ensure a high level of access to health services but relatively proscribed rights to education, for example.

The final chapter presents the various considerations presented, and concludes with the recommendation that a clear-cut commitment to social rights be included in the constitution of the State of Israel.

The main conclusions of each chapter are as follows:

Chapter A: Social Rights in the Constitution and in Practice - The Main Findings

In this chapter, we construct an index of the constitutional commitment to five social rights in 68 countries: the right to education, health, housing, social insurance, and workers’ rights.

The frequency with which rights are mentioned in a constitution varies. The right to social security, for example, appears in the constitutions of 47 countries, albeit with a relatively low level of commitment. Only 21 countries commit themselves to the right to housing, however.

Chapter B: Equality, Democracy, and Growth - The Main Findings

Democracy, economic equality, and the growth of per capita income are important objectives in western countries. In the past it was assumed that these goals were mutually contradictory, and hence it was considered necessary to distinguish between them. Studies undertaken in the 1990s of the relations between these variables have shown that in many countries they actually reinforce one another, while in others they coexist peacefully.

The resilience of democracy, as reflected in the electoral process and civil liberties, increased as standards of living and levels of education improved. Reducing disparities by providing the underprivileged population with a higher standard of living and better education serves to strengthen democracy.

The stronger the democratic foundation of a society, the greater the role of the underprivileged in the election process. This serves to increase government spending, including that on education. The shift in the allocation of resources helps to reduce inequality in income allocation, both in cash and in kind.

The influence of democracy on economic growth is complex, since this is evinced through several channels that have opposing effects. The more democratic a regime, the lower the level of economic inequality, the greater the extent of political and social stability; and the higher the level of human capital. All these channels increase economic growth. However, democratic countries also display a higher level of government spending, as well as lower incentives to invest in the means of production, thus impacting negatively on growth.

The various effects of the strength of democracy on growth neutralize one another. Whenever democratic rights are limited, however, an increase in democracy serves to accelerate economic growth.

All the studies but one show that reducing income inequality does not hamper economic growth, and in fact stimulates it. The correlation between equality and growth is reflected in three channels: (1) Greater equality enhances political and social stability, thus increasing the motivation to invest in the means of production; (2) Greater equality serves to increase investment in education for the population as a whole; note that investment in the means of production and human capital are the two key factors underlying growth; (3) A lower level of inequality dampens the incentive to adopt a policy aimed at changing income distribution by increasing taxation and expanding transfer payments and other social expenditure. While this fiscal policy may hamper GDP growth, no empirical evidence was found to support this view.

Chapter C: The Sources of Inequality in Israel - The Main Findings

Income inequality in Israel has risen over the past three decades, and Israel is now one of the countries with the widest economic disparities. This development is the result of factors that apply to all sections of Israeli society as well as to elements that are unique to specific populations: Arabs, new immigrants, and the ultra-orthodox.

The inequality ineducation ishigherthan in many other countries, despite the relatively large share of government expenditure on education.

The dire economic plight of the Arab population is one of the main sources of income inequality. This stems partly from discrimination against this population in education and the labor market. Inequality between Jews and non-Jews contributes approximately 16 percent to total income inequality.

The parlous economic condition of the elderly is another key factor behind the high level of income inequality in Israel. Many of the elderly came to Israel at a relatively advanced age, and had no pension rights from their countries of origin.

The government’s declining commitment to full employment, as evinced by the flow of migrant workers in recent years, is another cause of income inequality.

Although the ultra-orthodox do not contribute notably to income inequality in the sample, this segment nonetheless accounts for a higher poverty incidence

The disincentive to work inherent in welfare payments causes part of the population to remain outside the work force, leading to a very low level of income. While income inequality among employed persons is lower than for those who do not participate in the work force, the distinction is limited.

Alongside its high level of income inequality, Israel suffers from inequality in net income. Although this is somewhat greater than in most European countries, it is only slightly above its level thirty years ago.

Over the past two decades there has been a real increase in transfer payments, making a direct (technical) contribution to reducing inequality.

Alongside the expansion of transfer payments, in the last twenty years there has also been a substantial increase in the share of indirect taxes in total taxation, and a sharp reduction in subsidies. The low-income population bears a heavier burden of indirect taxes, but this has not been directly reflected in calculations of net income inequality.

Government intervention is also evident in education and health services, which influence both current and future income. Central Bureau of Statistics estimates indicate that these services are provided progressively. Given the findings regarding the achievements of the education system, however, further studies are needed in order to examine whether this is in fact the case.

Income inequality has increased in western countries, particularly the United States. Three main factors appear to explain this: skiled-bias tecnological change, globalization, and the decline of the labor unions. These factors are also evident in Israel, in addition to those specified above.

Chapter D: The Inclusion of Social Rights in the Constitution - Pros and Cons

The decision for or against the inclusion of social rights in the constitution will be the outcome of the relative weight attributed to each of the various contentions. We believe that the sum total of arguments tends in favor of including social rights in the constitution, first and foremost the right to education and social security, however without judicial review of primary legislation.