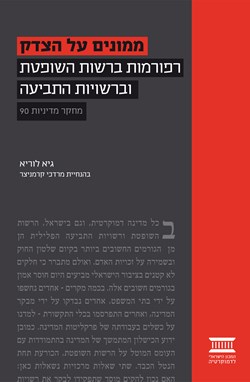 Reforms in the Judiciary and the Prosecution

This policy paper examines the principles that underlie the work of the Israeli judicial branch and the State Attorney's Office. It suggests systemic reforms designed to improve the function of these two authorities and to restore the public’s trust in them. The proposed reforms are based on maximal preservation of the independence of these institutions and of the principles that enable them to establish justice in the Israel.

For many years, the role of the courts in Israel, and of the Supreme Court especially, has been the focus of  heated public debate. Rifts in Israeli society, the obvious shortcomings of the political system, and a growing tendency to turn to the courts to resolve disputes that were once settled through political or other means (the so-called "judicialization" process) place a heavy burden on the Israeli judiciary. Coupled with this, the judicial system faces an ever-growing budget deficit; the courts are unable to keep pace with their case load; and trials typically last far too long. This is the background for the frequent initiatives to streamline the Israeli justice system. It should come as little surprise that recent studies indicate that the public is losing confidence in the courts, and the Supreme Court in particular.

The Supreme Court's involvement in fundamental issues that the political system could not resolve has given rise to the claim that the Supreme Court exercises excessive judicial activism and even takes a political stand on certain issues. This argument—with which I disagree—can be seen as a reflection of the feeling that the law is not the sole consideration in rulings handed down by the Supreme Court and other Israeli courts. The disdain expressed by a considerable portion of the public threatens one of the cornerstones of the court system: public trust. In light of these sentiments and other difficulties that the Israeli courts face, it is time to institute a program of reform, one which will guarantee that the court system (and especially the Supreme Court) will gain and retain public trust.

The reform of the judicial branch will have to strike a balance between bolstering the independence of the courts and ensuring that the courts are mindful of their responsibility to the public and will operate efficiently and effectively. This can be achieved by adopting a more comprehensive viewpoint on the Israeli court system and reconsidering the arrangements to guarantee the independence of Israeli judges, including judicial tenure and the procedure for judicial appointments. These steps will ensure that the court system will win public trust and will continue to defend the rule of law, democratic values, and human rights.

This policy paper concludes that Israeli law is deficient with regard to the administration of the courts, and recommends that the courts be made more institutionally independent by transferring administrative responsibility from the Minister of Justice to the court system. Institutional independence is an important means of safeguarding judicial independence, itself a means of protecting the rule of law and democratic values.

Few countries in the world have an almost completely independent judiciary. In theory, there can be no completely independent judiciary, because—like all state institutions—the courts will always be dependent on the legislative branch. That said, in recent decades the extent of judicial independence has increased in many countries. This trend is the result of recent changes in the role of the court and substantive changes in the administration of the courts.  Following are six recommendations for reform of the judicial branch in Israel.

If these powers will indeed be transferred to the judicial branch, we must establish procedures to ensure that the court system will be characterized by both transparency and accountability. One example would be the requirement that the judiciary branch report to the Minister of Justice and the Knesset. The evaluation should be based on the quantitative and qualitative measurements used by judicial systems around the world, and these measurements should be used to improve judicial-oversight mechanisms.

While the criminal prosecution is one side in the judicial process, it also serves as the representative of the public interest. The criminal justice system in Israel is based on a common-law tradition, namely the adversarial system. The adversarial system considers independence of the prosecution to be of paramount importance, and we must take pains not to compromise it. At the same time, however, we should look for ways to ensure that the State Attorney's Office and other government bodies involved in criminal prosecution are accountable and that they receive sufficiently vigilant oversight. The parties currently involved in the oversight of criminal prosecution in Israel—including the State Comptroller, the courts, and the Attorney General—do not properly supervise the decisions that are handed down or how the criminal system is administered.

This policy paper recommends the establishment of a mechanism to foster greater public accountability and responsibility on the part of the criminal prosecution, that would involve system-wide oversight and a fair, efficient process for investigating complaints lodged against attorneys. After consulting with the Attorney General, the Minister of Justice should appoint a retired Supreme Court justice or district court judge to serve as an independent overseer of the State Attorney's Office and other offices engaged in criminal prosecution. This individual will have the authority to conduct system-wide oversight, on both a regular and an ad hoc basis, with the goal of improving the modus operandi of the State Attorney's Office and the prosecutorial system in general. The comptroller will be chosen from a list candidates submitted by a search committee, and will act and be paid by law. The comptroller of the State Attorney's Office will prepare and submit regular reports to the Attorney General, the Minister of Justice, and the Knesset.

The second proposal is that the comptroller of the State Attorney's Office should also serve as a commissioner for investigating complaints against attorneys and prosecutors working in all branches of the criminal prosecution system. This commissioner will not impose sanctions, but will refer the complaints s/he deems justified to the appropriate authorities: in minor matters to the District Attorney or State Attorney (depending on who has authority over the prosecutor in question) or the appropriate authority outside the State Attorney's Office if there is concern about a possible ethical, disciplinary, or criminal offense.

The policy paper includes a draft of a bill based on the two recommendations presented above. I raise the possibility of using more modest measures as well. For example, the Attorney General might submit an annual report to the Knesset, summarizing what was accomplished during the year. I recommend continued use of the current tools for promoting the accountability and transparency of the State Attorney's Office, e.g., publishing its prosecution policies and formulating a set of prosecutorial ethics.