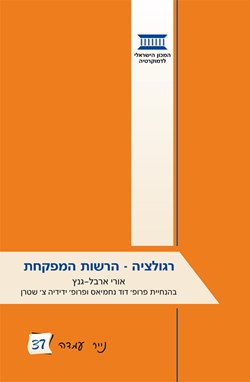 This position paper addresses Israel's regulatory processes, their design, and their manner of implementation. It defines the term "regulation" and discusses the normative and positivist justification for the state's regulatory activity. It examines governmental regulation in the United States and Britain, and presents regulation in Israel, suggesting analytical frameworks that may be used in considering regulation as public policy.

Ever since human beings first came together to establish a framework for communal living, the state, from its inception, has been a system of restrictions and allowances on one hand and authority to enforce them on the other. The system of laws and regulations, which permitted one behavior and forbade another, was influenced by many factors, including ideology, religion, scientific and philosophic development, wars, technology, economics, etc. These factors have led to great differences between states in the arrangements between the governing apparatus (the legislative, executive and judicial branches), and the citizens subject to it.

Today, at the dawn of the third millennium, there is in fact no area of life impervious to state intervention. In one way or another, the state affects every facet of the individual's life--sometimes permitting, sometimes preventing and sometimes prohibiting his actions. The state regulates society's activities and the individual's actions, as it does those of the private, public and voluntary organizations operating within its territory. For the most part, this is administrative regulation, which we define as follows: the regulation of the interchange of values in society by an executive governing authority, which-through regulations, guidelines, instructions or administrative orders-requires, approves, prevents or prohibits activity or behavior by the individual and/or by organizations in society.

Regulation is at the heart of governmental activity in designing, implementing and evaluating public policy. Moreover, the political struggle over the public agenda and over the allocation of resources in society causes constant dynamism in the spheres and degree of intervention through regulation. Thus, there are spheres that two decades ago were completely controlled by the state, which today are the province of private organizations. On the other hand, there are spheres that in the past saw no state involvement, in which regulation is currently fairly deep-seated and comprehensive.

When it began, regulation was viewed as being no more than an economic tool for balancing market forces. Both regulators and researchers came from the discipline of economics; the parameters for examining the effectiveness and efficiency of regulation were therefore characterized mainly by economic equations. More than half a century passed before regulation took shape as an instrument also of social, moral and even ideological policy. In doing so, it went from being a means for achieving economic efficiency to being a means for achieving principled and normative effectiveness in a broad range of spheres.

Today it is customary to justify regulation, from a normative standpoint, according to the advancement of the public interest through correcting market failures on one hand (economic regulation) and ensuring the distribution of justice on the other (social regulation).

This is not the case when we examine the justification for the existence of regulation from the empirical standpoint. On this plane, there are a number of theories that seek to present alternative explanations for the existence of regulatory policy: the influence of interest groups; the influence of ideology on the relations between the state and society; the influence of policy networks on designing regulation; institutional influences; and, of course, the influence of the personal interests of the regulators themselves--who seek to promote their interests through the administrative power they possess. All of the positivist approaches minimize the influence, if any, of the public interest over designing regulation. While the normative objective of regulation is to promote and preserve the public interest, it is easy to discern the great gap that exists between the level of normative analysis and the level of positivist analysis.

Despite being commonplace in democratic states around the world, regulation assumes different forms, depending on the state, not only in its scope but also in the way it is designed and in the manner in which it is implemented. In some states, independent commissions were established that are responsible for designing and implementing regulatory policy; in others, regulation is placed in the hands of quasi-independent agencies; and there are states in which the bureaucratic ministry is responsible for its design and implementation. The institutional differences on one hand, and the broad scope of regulation and decentralization of enforcement authorities on the other, make it necessary to define a uniform basis for analysis that will enable us to take a comparative look at the regulatory machinery. To that end, we drew a distinction between regulators and others possessing regulatory powers. A regulator is an authority, committee, council or individual whose function is to design and implement regulation [as defined above] and who does not have any other authority except for the authority at its disposal to design and implement the regulation. In contrast, it is possible that regulatory authority in a specific sphere will remain in the hands of a government minister. This is not to say that the minister is the same as a regulator; the minister performs a large number of tasks, possesses a range of authorities and employs a variety of policy instruments, including regulatory ordinances.A regulator does not employ policy instruments except for regulation, holds no authority except regulation, and has no tasks except for regulation.

This position paper derives from this distinction. Regulators are appointed public servants who hold broad and comprehensive authority, the use of which means impinging on the rights of the individual to some degree. The public does not elect regulators; for the most part, it is not aware of their work and therefore also does not criticize them. Only very rarely does it have the possibility of influencing their decisions through the machinery of the bureaucracy, but the public is regularly influenced by the regulators' decisions, which affect all spheres of life.

While in many states regulation is commonly discussed, in Israel it is only recently that politicians, bureaucrats and individual members of the public have begun to discuss regulatory issues from both the normative and empirical aspects. But this discussion is still nascent. Thus far, no systematic mapping of regulatory institutions in Israel has been conducted, and regulatory policy has not been studied using public policy indicators. Of the few studies in the field that do exist, nearly all examine regulation in Israel through economic indicators.

In this study, we conducted a preliminary classification of the various regulators in Israel. We found a multitude of regulatory institutions that differ from each other in a host of indices, such as the identity of the responsible echelon, legal standing and organizational affiliation, and the processes of designing and implementing policy. We also found that the overwhelming majority of regulators are granted broad authority, and that they have almost unlimited discretion. This is also true regarding the leeway granted to the regulator: the latter may, and is permitted to, design regulation according to its worldview, usually without real oversight by the courts or internal comptrollers. As the legislation is currently worded, almost any regulatory decision may, on the face of it, be legal and proper. It merely has to demonstrate that it does not deviate from the realm of reasonability, that it does not grossly discriminate against one group or another, and that it does not unnecessarily harm the rights of individuals or of organizations on behalf of a worthy goal.

This position paper addresses the regulatory processes, their design and manner of implementation. First, we define the term "regulation" and discuss the normative and positivist justification for the state's regulatory activity. Then we examine the historical background to the creation and development of governmental regulation in the United States and Britain; we present the institutional regulatory apparatus in both countries. Finally, we present regulation in Israel, and suggest analytical frameworks that may serve it when it considers regulation as public policy. To that end, we examine a number of instances of regulatory policy in Israel.

Our work will be rewarded if this presentation deepens public debate on the subject, both in the media and in the halls of government, and puts these issues on the public agenda. We believe that studying governmental regulation in Israel may contribute to the work of academics as researchers, to government advisers as policy designers, to elected officials as policymakers and to public servants as implementers of policy.