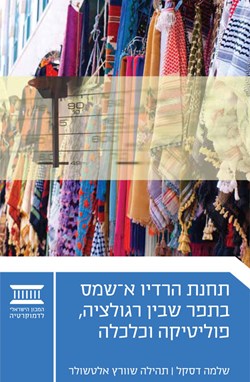 A-Shams: The Challenges of an Arabic Radio Station in Israel

The first serious study of an Arab-language media outlet in Israel, this exploration of Radio A-Shams, an Arabic-language Israeli radio station, focuses on current issues in the media world as well as policy issues related to the character and future of the State of Israel.

On a hilltop overlooking the Galilee, Radio A-Shams, an Arabic-language Israeli radio station, has been broadcasting for the past 12 years. This regional and sectoral station for Arabic speakers is licensed by Israel's Second Authority for Television and Radio, which oversees its activities.

The story of Radio A-Shams offers a firsthand glimpse into Arab society in Israel, a direct encounter with the moods that prevail there, and a different perspective on the relations between Arab society and the majority Jewish society. This story is unique, because Radio A-Shams must create a free and independent media culture, within certain limitations, in a society with no such tradition. What is more, over the years, it has become the unofficial representative of Arab society in Israel. As a radio station, it must deal with the same challenges that face all media outlets in Israel. At the same time, it must cope with the crisis of leadership in the Arab sector and with the exclusion practiced by the Jewish majority, which sometimes sees Arab society as a threat. At a time of growing tension and widening gulfs between Israel's Arab minority and Jewish majority, Radio A-Shams is one of the few points of contact between the two.

This volume is the first serious study of an Arab-language media outlet in Israel. It focuses on current issues in the media world alongside policy issues related to the character and future of Israel.

Shlomo Daskal is a researcher who focuses on communications and media in Arab society in Israel. At the time of the writing of this book, he was a researcher at the Israel Democracy Institute.

Dr. Tehilla Shwartz Altshuler is head of IDI’s Media Reform project, and teaches at the The Federmann School of Public Policy and Government at the Hebrew University of Jerusalem. She is an expert on media regulation and open government.