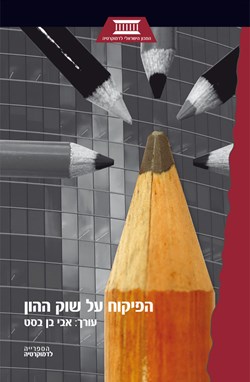 Regulation of the Capital Market

The financial brokerage system is very important for both the economy and for individuals; however, it is also extremely prone to bankruptcy. In order to insure its stability and to protect the public interest against exploitation, there must be institutions to regulate and oversee the activity of the brokerage system effectively.

The oversight structure in Israel is not suited to the changing demands of the market in Israel and abroad. In this volume, Professor Avi Ben-Bassat, Dr. Sharon Blei, and Dr. Asher Blass present a series of studies that demonstrate that the Israeli system of capital market regulation has serious problems. The studies show that the state of the capital market requires urgent action, especially in light of the structural changes of recent years and changes in oversight mechanisms around the world.

Five institutions are responsible for regulating the monetary and capital market in Israel. Though they regulate similar activities, they are very different in their authority, enforcement powers, independence, and the resources available to them. The studies in this book examine the disparities in the supervision provided by these different agencies and note their hidden dangers. The book reviews the advantages and disadvantages of the oversight structures in 76 countries and examines how the characteristics of the capital market and the economy influence each country’s choice of regulatory model.

In the past 20 years, multiple regulatory agencies were merged in 27 of the countries that were surveyed, which were mainly developed countries. The authors’ conclusion is that Israel, too—in light of the structure of its capital market and the serious problems of its oversight system—should combine all its regulatory agencies. They believe that a federated structure would be the best way to do this.