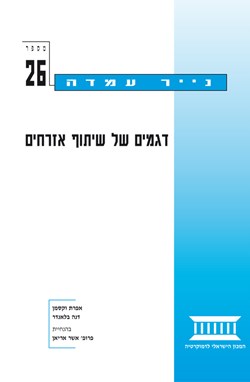 Do initiatives aimed at involving citizens in government decision-making processes help foster trust between the public and democratic institutions, or do they somehow weaken the political system? This policy paper examines this question from a critical perspective.

What is the meaning of the initiatives for involving citizens by the government in decision-making processes? Do these initiatives help in fostering trust between the public and democratic institutions, or do they somehow weaken the political system? The research presented here examines these and other questions from a critical perspective: the conclusions derived from it are that the initiatives to involve citizens indeed help strengthen democracy and the direct contact of the citizen with officials—but at the same time, it is important to think about the unequal character of such initiatives, which grant advantage to established groups with resources in the face of minority groups in the margins of society. Furthermore, a distinction should be made between perceived involvement and real involvement that actually influences the decision-making process.

At the turn of the 21st century we are witnessing profound political changes in western democracies. Under conditions of a global market economy, the apparatus of the welfare state has eroded and the authority of central government become undermined. Democratic governments find it difficult to reconcile the contradictory demands of citizens. They struggle to formulate policy and implement it.

The weakness of the state affects the way citizens apprehend the political process. Researchers point to an ongoing decline in levels of public trust in government and in indicators of participation via established channels of political activism. In conjunction, civil society is growing increasingly powerful and democratic norms claiming wider participation in decision making are gaining salience. The crisis of governability on the one hand and the awakening of civic consciousness on the other provide fertile ground for new modes of participation.

In this position paper we explore different patterns of civic involvement in policy making that have evolved in recent decades. Unlike other forms of political participation, civic involvement – sometimes referred to as ‘partnership’ – is seen as a ‘top-down’ action. Its aim is to enhance accessibility to decision makers as well as to create a forum for public deliberation, thus enabling citizens to play a greater role in decision making processes. Civic involvement appears as a point of convergence, where governmental initiatives meet citizens’ demands for greater influence over issues that impact on their lives.

In the position paper we look at different initiatives to encourage civic involvement in urban planning and education. We also examine processes of establishing community boards, and review deliberative projects such as Consensus Conferences – a model that has been successfully implemented in Israel over the past few years.

The foci of this discussion are the implications of government-promoted participatory projects for a society in which the political center is losing authority. Is the political system furthering its own downfall? Or does civic involvement foster cooperation and increased partnership between citizens and the government, thereby enhancing trust in government? In order to answer these questions, it is vital to discern the various objectives of participatory initiatives, to differentiate local undertakings from nationwide plans and – most importantly – to distinguish false from genuine partnership, as the latter exerts significant influence over decision making.

Civic involvement can serve as a valuable tool for sustaining democratic culture and better formulation of public policies. However, we also highlight the limitations of such initiatives, most notably inequalities in civic participation that could work to the detriment of minorities and underprivileged groups.