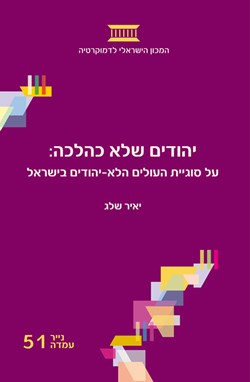 The policy paper analyzes a range of issues and problems that have emerged in the wake of the mass aliyah from the former Soviet Union, which brought with it record numbers of non-Jewish immigrants. It considers the social and national consequences of this aliyah, and offers policy recommendations.

Since its establishment, about three million immigrants have joined the State of Israel. Over this entire period, the immigrant population has included a certain number of non-Jewish family members (spouses and offspring). However, the great wave of aliya from the Former Soviet Union (FSU), which began with the Soviet Union’s collapse at the end of the 1980s, led to a dramatic increase in the number of non-Jewish immigrants: nearly 300,000, to date. This increase stemmed in part from the sheer magnitude of the wave of aliya itself (approximately one million people) and, in part, from the high rate of “mixed marriages” between Jews and non-Jews, which characterized the years of the Communist regime.

This report examines the various implications of the non-Jewish immigrant phenomenon and “maps” the problems that it creates in both the personal and the national spheres. At the personal level, the report lists the problems in their order of importance in the view of the immigrants themselves: the non-recognition of children of Jewish fathers as Jews (according to halakha, only a Jewish mother can pass Jewish identity on to her children); the problem of family members being cut off from each other in those cases even where a broader interpretation of the Law of Return (which enables non-Jewish spouses, children, and grandchildren to make aliya) does not apply; the inability to marry in Israel (since only religious weddings are valid in Israel); burial of non-Jewish immigrants (the Jewish burial system in Israel is primarily religious and intended for Jews only); and the social hostility to which many immigrants, but particularly the non-Jews among them, are subjected.

Tags:
Jewish immigration/Aliyah,
marriage,
Israeli society,
Who is a Jew?,
Religion and State