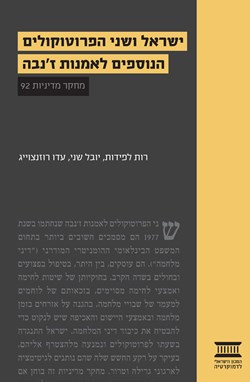 Israel and the Two Protocols Additional to the Geneva Conventions

The two protocols that were added to the Geneva Conventions of 1949 in the 1970's are key documents in the laws of armed conflict. This study examines whether the time has come for Israel to adopt them.

The two protocols drafted by the Diplomatic Conference on Humanitarian Law that convened in Geneva from 1974-1977, and which were added to the Geneva Conventions of 1949, are key documents in modern international humanitarian law (the laws of armed conflict). The First Additional Protocol includes 102 articles with respect to, inter alia, care of the wounded and sick on the battlefield, methods and means of warfare (e.g., the definition of lawful targets which may be struck during armed conflict), the rights of combatants to the status of prisoners of war, protection of civilians during armed conflict and, the means of implementation and enforcement that must be taken in order to ensure the fulfillment of the provisions of the protocol. The Second Additional Protocol, including only 28 articles, sets forth core humanitarian rules that will apply to non-international armed conflict (such as a civil war). The two protocols, therefore, complement and update the previous conventions in the field of international humanitarian law, first and foremost the four Geneva Conventions of 1949.

There is, however, a fundamental difference between the status of the protocols of 1977 and the status of the conventions of 1949: The conventions were ratified, in essence, by all of the states of the world (including Israel), whereas the protocols were less widely accepted. As of June 2011, the First Additional Protocol had been ratified by 170 states and the Second Additional Protocol had been ratified by 165 states. Among the states that have not joined either of the protocols are India, Indonesia, Iran, Malaysia, Morocco, Nepal, Pakistan, Somalia, Sri Lanka, Thailand, Turkey, the United States of America and Israel. Israel is even considered to be a "persistent objector" to some of the provisions of the First Additional Protocol, although it was a very active participant in the drafting of both of these protocols in 1974-1977. Israel was the only state that voted against the approval of the final version of the protocols in the concluding meeting of the diplomatic conference in Geneva and even voted, in the course of the conference, against the adoption of some of their central provisions.

Israel's historic opposition is primarily based on three principled grounds: the application of the Geneva Conventions and the First Additional Protocol to wars of national liberation; greater flexibility in the rules entitling guerilla fighters to receive status of prisoners of war; and the means by which national liberation organizations can join the protocol, in such a manner that, in Israel's opinion, derogates from the duty of obeying the laws of war and encourages guerilla organizations to use terror as a combat tactic.

The present study examines whether, with the passage of more than thirty years since the protocols were adopted, the time has come for Israel to join them for the following reasons:

The study's conclusions are that indeed with the passage of years many of the objections voiced by Israel at the time the protocols were drafted no longer constitute an obstacle to joining them: The Israeli Supreme Court has ruled in a line of decisions that at least some of the provisions of the First Additional Protocol apply, as customary law, to military actions taken by Israel against armed Palestinian groups and individuals. Similarly, as is apparent from official publications and responses to petitions to the High Court of Justice, the State itself is of the opinion that certain provisions of the First Additional Protocol apply as customary law in both international and non-international armed conflicts, as an accepted minimal standard. Therefore, in our opinion, the objection, on principle, to the applicability of all of its provisions has been eroded over the years in situations in which Israel is fighting a non-state entity.

Moreover, the interpretation of the High Court of Justice (as it appears, inter alia, in HCJ Targeted Killings decision), according to which the Israeli-Palestinian conflict is in some respects international in character-renders it unnecessary to determine whether the present conflict falls under article 1(4) of the First Additional Protocol (the article with respect to applicability to a war for national liberation) and greatly restricted, if it did not completely obviate, the practical implications of the Israeli objection to this article.

However, the study raises doubts as to the question whether a real change has occurred in the circumstances that could remove or soften Israel's objections to articles 43-44 of the First Additional Protocol, with respect to making the terms for the entitlement of guerilla fighters to the status of prisoner of war more flexible in such a manner that significantly infringes upon the principle of distinction.

At present, the question that needs to be examined, therefore, regarding joining the First Additional Protocol, is whether the disadvantages of accepting the arrangements appearing in articles 43-44 (possibly with the addition of a limiting reservation or interpretative declaration) exceed the advantages of joining the international community, which could improve Israel's status in the international community.

With respect to the Second Additional Protocol, in the present study we did not find a real reason for Israel to refrain from joining it. Moreover, the State may consider adding a declaration broadening the applicability of its provisions and applying them to any armed conflict that is not international in nature (according to the lower threshold of common article 3 of the Geneva Conventions).