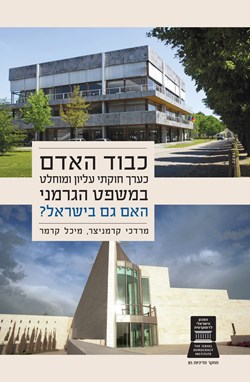 Human dignity is a central constitutional value in Israeli law and is anchored in Israel’s Basic Law: Human Dignity and Liberty. Yet, despite the importance attributed to it, several questions remain regarding the constitutional protection conferred by this value. This book surveys the German legal system, and discusses relevant German case rulings and literature. The authors propose that these serve as a source of inspiration for the appropriate interpretation of the value of human dignity in Israeli law.

The Basic Law: Human Dignity and Liberty anchors human dignity as a constitutional value in Israel and regulates the protection of a number of constitutional rights, among them the right to personal freedom, to privacy, to a good name and the right to life and bodily integrity. In cooperation with Basic Law: Human Dignity and Liberty, the Basic Law: Freedom of Occupation regulates the constitutional protection conferred to freedom of occupation. Other basic rights in Israel, such as freedom of speech, freedom of religion and conscience or the principle of equality are not regulated by a basic law.

Human dignity as anchored in the Basic Law operates as a guiding right. It may be broadly construed in a manner that enables it to subsume constitutional rights that did not merit explicit mention in the Basic Laws. Alternatively, it may be narrowly construed. The question, which rights are derived from human dignity and thus fall within the scope of the essence of the right to dignity, is a question of interpretation. From this follows the tremendous importance of interpreting the value of human dignity in a manner that properly determines the scope of protection that it confers. The appropriate interpretative examination must proceed from the assumption that Israel will in the future have a complete bill of rights, which includes human dignity in addition to the other central human rights.

Notwithstanding the importance attaching to human dignity in other systems of law, none of them confer it the fundamental and central importance ascribed to it in the German legal system. Human dignity is anchored in the first section of the German Basic Law, and merits special standing, distinct from other basic rights or constitutional values. It is conceived of as a supreme value, and as a legal concept of the highest import. Its special status has spawned - extensive interpretation - both in academic writing and in case law regarding the question of the constitutional protection that it provides. Accordingly, as part of the analysis of the appropriate interpretation of the constitutional protection of human dignity in Israeli law this study examines its interpretation in German law.

The first article analyzes some of the issues pertaining to the interpretation of human dignity.

This article concludes that human dignity as a constitutional value is intended to protect human life from the stage of a person's birth, alive. The question of the conduct of experiments in genetic and biotechnical realms is indeed an important one, but need not and cannot be resolved in light of the interpretation given to the value of human dignity and in light of the protection it grants.

Regarding the central question of the study, namely the substantive interpretation given to human dignity as a constitutional value and right, this study concludes that the alternative interpretative approaches to human dignity in German law - protection based on the values of personal autonomy and free choice or protection from humiliation or from being reduced to an object - are not compatible. As indicated by the cases addressed in German case law, protection against humiliation and objectifying a person may also involve protection of a person against their own actions. It may dictate an "ideal image" of a person and in doing so infringe upon each person's own autonomy and free will, which are of themselves values that derive from the value of human dignity.

The question of the appropriate interpretation of human dignity relates directly to the question of its appropriate constitutional standing. An approach similar to that adopted by German law, conferring it absolute, inviolate status, would encourage giving the concept a narrow substantive construction. A broad substantive construction, in which the scope of the protection offered by the concept of human dignity is not defined, would preclude conferring it an absolute status in which it cannot be balanced against any other interest or right. A weaker version of human dignity, which would accommodate a balance between human dignity and other interests and rights, would also allow a broader interpretation of its content as a constitutional concept.

The right to human dignity in German Law is comprised of three central features. Firstly, it is an absolute right in the hierarchy of rights and interests, that is: it is neither subservient to nor paralleled by any other right. Secondly, the right is absolute in the sense that it cannot be limited by balancing it against other rights or interests. An act that infringes human dignity is a priori unconstitutional, and hence prohibited, regardless of the interest or the right promoted by its infringement. Thirdly, the right is inalienable and, as such, no consideration or majority can detract from its status. This study is concerned with the first two features, and especially the second - the absoluteness of the right. These features raise a number of questions concerning their justification per se, and specifically regarding the possibility of their adaptation and adoption in Israeli law. They also call for an examination of the considerations justifying the conferral of supreme, absolute status to the right to human dignity, as well as of the considerations that argue against such a status, through an examination of the right and the protection granted to it in other legal systems, especially in the German system. This study does not approach the subject from the perspective of rights protected under, Israel's Basic Law: Human Dignity and Liberty in its current form but rather from that of a constitution that comprises a complete charter of human rights.

It would appear that the more general justifications all share a fear of the problems presented by a balancing discourse that grants (almost absolute discretion to the constitutional interpreter. More specifically and germane to our own concerns, it could be argued that the acceptance of a balancing approach, especially the balancing of values conducted in constitutional adjudication, may result in the court "surrendering" to oppressive dictates of heavy handed political power and inflamed public opinion. Such surrender may culminate in granting judicial legitimacy to severe infringements of human rights. There is no lack of examples - in Israel and abroad - of the sorry consequences that result when this fear is realized.

The fear becomes even graver where it concerns the "other," those without political representation, the foreigner, and primarily those depicted as "the enemy." Harm inflicted upon the "other," as opposed to harm inflicted upon "us," may be far more aggressive and far more likely. Given that harm to the "other" does not prompt the response that restrains us from violating rights due to our fear of our own rights being violated, the harm inflicted is liable to be devoid of any restraint and inhibition. There is no shortage of cases reflecting this escalation. The classic cases are those in which "otherness" is combined with danger, or a sense of danger, exemplified by the draconic arrangements governing a "state of emergency," and in many of the arrangements that balance security considerations against rights, such as the rights of the administrative detainee. These arguments provide justification for establishing deontological barriers in the form of absolute rights, and at least for establishing the absolute nature of certain aspects of these rights.

As opposed to the considerations mentioned above, which support the absolute protection of human dignity, there are also opposing considerations. Here, too, we can distinguish between general considerations that reject absolute determinations as such, and considerations that specifically reject the absoluteness of the right to dignity. The general considerations include, for example, the claim that an absolute rule can never suit all possible cases, and that its adoption necessitates a "waiver" of a just result in some cases. A second argument is that classification of a right as absolute may transform it into a "trump card." On the one hand, this could result in attempts to classify any constitutional right as absolute, leading to its overall devaluation, and on the other hand, it could lead to a narrow and even excessively narrow construction of the right, in order to prevent absurd results. A third argument is that the establishment of a right as absolute becomes problematic in cases where the same right is argued by both parties and a decision must be made to prioritize one injury over the other.

An examination of the conflicting specific considerations points primarily to the fear that conferral of absolute protection to a right that is vague and broad, like the right to dignity, and the desire to prevent situations in which other rights are frequently in conflict with the right to dignity, such as the right to life or freedom of expression, leads to inadequate protection of the right (this concern was addressed in our comments above on the comparison of rights in the context of the supremacy of a particular right).

The problem of deciding between the opposing considerations calls for the identification of a middle path in the hope of avoiding such difficulties. The emerging solution is one that discerns certain aspects of human dignity as meriting absolute or nearly absolute protection, while avoiding the granting of absolute protection to a comprehensive right to dignity. We attempt to identify these specific defined aspects of human dignity based on two principal sources: The first is international law, and the other is the sixty years of German case law founded upon this absoluteness.

The list of "candidates" for absolute, or almost absolute, protection presented in the final part of this paper is not complete, but arguably includes those aspects that constitute the core of the right to dignity. Inter alia, it includes such inviolable prohibitions of international law as the prohibition on slavery, torture and crimes against humanity; other principles of criminal law, such as the prohibition on imposing sanctions that are not based on personal responsibility and guilt, the death penalty (perhaps also the imposition of imprisonment with no possibility of parole), and the right against self-incrimination; and such fundamental principles of public law as the individual's right to effectively present his case before the imposition of any administrative action that harms him, the "social" right pertaining to the guaranteeing of minimal living conditions (an affirmative duty on the state), and even the right not to suffer racially based humiliation deriving from state actions.