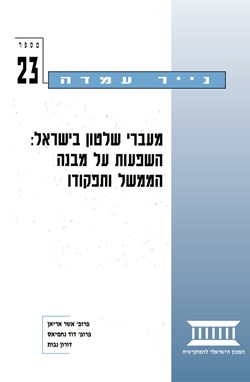 Influences on Governmental Structure and Functioning

An examination of the complex process of efficient transfer of power following elections, with a focus on the early preparations of prime ministerial candidates; the performance of prime ministers during the transition period; and the effects of these transitions on the structure and functioning of the Prime Minister’s Office.

Governmental transitions that are carried out lawfully and bloodlessly are a clear and important trademark of democratic rule. Many nations wish for such arrangements and it is easy for us, as citizens living in a democratic regime, to take this important attribute of our political life for granted. In practice, the constitutional principles, institutional arrangements and political culture that determine how governmental transitions are carried out differ from country to country, but their purpose is the same: the exercise of the right of the voters to change the political leadership while maintaining order, stability and effectiveness of government.

Along with the inherent problems, the process of governmental transition holds the potential for success of the new administration. To a large extent, the nature of the transition will determine the ability of the new administration to govern, the degree of legitimacy that it enjoys in the eyes of the public, and its ability to introduce new goals, alter procedures and initiate changes and reforms in public policy.

Structure of the Study

The third and final part of the study provides a summary of the governmental transitions that have taken place in Israel and presents a list of recommendations that, if adopted, would help improve future transitions and make them more efficient.

The governmental transitions that have taken place in Israel have borne little resemblance to one another. Circumstances changed, the time periods were not fixed, the people who participated in them were replaced and the institutional arrangements (including the electoral system itself) were different. As a result, the influence of governmental transitions on the ability to govern of members of both outgoing and incoming administrations has not been consistent.

The most obvious flaw in Israeli governmental transitions is the lack of adequate and organized preparation on the part of the prime ministerial candidates during the run-up to the elections. As this study has shown, prime ministers who carried out governmental transitions without adequate preparation or prior planning ran into serious problems when they tried to advance their preferred public policy swiftly, efficiently and effectively. Even a small amount of preparation would have been sufficient to ensure them greater success. The most neglected area has been socio-economic policy. No prime minister has come into office with a sound socio-economic plan outlining priorities and budgetary resources. The sole exception is Shimon Peres, who instructed various teams to prepare position papers and detailed proposals before his entry into office in 1984. It is needless to recall that Peres in fact went on to introduce a new and successful economic policy (the Economic Stabilization Plan of July 1985). It should be noted that despite the connection between the country's security situation and the socio-economic situation, prime ministerial candidates are not exempt from necessary advance professional planning in this field.

In most cases, new prime ministers were wise enough to express themselves in a statesmanlike manner during the period of the formation of the government. Menachem Begin deviated from this rule in his declarations on the importance of Kedumim, as did Yitzhak Rabin in a speech in which he emphasized his own role in his party's victory. Most prime ministers have also maintained a close relationship with the media, with the exception of Ehud Barak, who limited his public statements and generated much uncertainty with regard to the nature of his coalition, the distribution of portfolios within the party and his general intentions.

As is well known, serious differences of opinion exist regarding the appropriateness of political appointments to public office as opposed to professional appointments. In this argument, the United States takes the approach that it is legitimate and even desirable to replace the bureaucratic elite after a change of government (the "winner takes all" approach). In contrast, in the United Kingdom it is customary to allow career bureaucrats to continue in their positions regardless of election results and changes of government. Over the years, the advocates of the two approaches have softened their positions, and today many tend to recognize the benefits that arise from a combination of the two approaches. A clear tradition with regard to this issue has not yet developed in Israel.

The majority of prime ministers in Israel have not rushed to change the bureaucratic elite and some have left many senior officials in place. Menachem Begin went a step further when he allowed senior officials who were strongly identified with the previous administration to continue serving in sensitive positions. Yitzhak Rabin, too, left the existing cabinet secretary and the heads of some of the delegations to the peace negotiations in place. In this context, an exception was made by Binyamin Netanyahu, who dismissed many officials who had served under the outgoing administration and replaced them with associates who were not always suited to the positions in question.

The solution to the problem of professional versus political appointments is found in a measured inclusion of qualified individuals who identify with the new political order. If the prime minister and the cabinet are keen to replace senior officials, out of a desire to place people with a political outlook similar to their own in the public system, they should appoint individuals with a suitable professional background and a proven track record. However, in order not to upset continuity and institutional memory, they should be careful not to make sweeping personnel changes.

Prime ministers have generally started their terms with meetings with world leaders and a deep involvement in the peace process. Begin concentrated on the peace process with Egypt, Rabin focused on achieving an agreement with the Palestinians and invested considerable effort in the Syrian track, Netanyahu focused on the Oslo Agreements, and Barak started his term with a burst of peace initiatives and meetings with Arab and Western leaders.

The opportunities provided by the customary one hundred day grace period were rarely utilized for dramatic changes in the structure or procedures of the government, or for improving the government's decision-making processes. An exception was made by Menachem Begin, who introduced a number of short-lived changes in government ministries. Binyamin Netanyahu also attempted to effect a number of changes of this kind, mainly through the appointment of an economic council, but these changes were carried out in a perfunctory fashion and were not of a lasting nature. The last example of a missed opportunity comes from the governmental transition that took place in 1999. Ehud Barak did not succeed in establishing a Planning Directorate in the Prime Minister's Office at the start of his term and, as time passed, the objections of various ministers (including the Interior minister, Natan Sharansky, and the National Infrastructure minister, Eli Suissa) only increased, despite the fact that their parties had committed themselves in the coalition agreements to transfer some of the responsibilities of the ministries that they had been entrusted with to the future Directorate. Economic and social policy was rarely changed during the first hundred days. The exception to the rule was Yitzhak Rabin, whose government froze the construction of public housing at the very start of its term. On the whole, it may be concluded that significant changes in the area of internal affairs were bound up with issues of religion and state and the settlements in the occupied territories.

It is clear that the nature of a governmental transition depends to a considerable extent on the institutional arrangements that determine the manner in which the prime ministerial candidate is selected within his party, as well as on the institutional arrangements that determine how he will be elected by the public. These arrangements influence the process in three interrelated ways: they affect the relationship between the candidate and the leadership of his party, the amount of time that the candidate has at his disposal to prepare for government and the process of selection of the candidates, their characters and their experience.

From 1977-1998, the institutional arrangements in the Likud and Labor parties strengthened the relationship between the candidate and the party leadership, a fact that allowed the candidate to prepare plans in cooperation with the members of his party, involve them in the process of coalition formation and create a shared feeling of victory. In contrast, since 1992, and even more so since 1996, the parties' internal institutional arrangements (primaries) and the system of direct election of the prime minister have enabled the emergence of a candidate who did not rise through the ranks of the party, thus increasing the potential for friction between the candidate and the senior members of the party. This is exactly what happened during the governmental transition under Rabin, who did not turn to the members of his party during the preparations for the transition. The same occurred, in a very obvious manner, during the governmental transitions under Netanyahu and Barak (neither of whom enjoyed the support of the upper echelon of their parties at the time of their election): they did not cooperate with the senior members of their parties during the preparations, they did not involve them in the formation of the government, and they did not share with them a sense of partnership in their victories or in the running of the country.