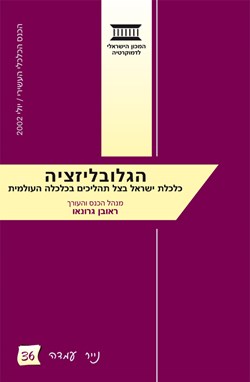 Globalization's Implications for the Economy

This policy paper, prepared for 10th Caesarea Economic Policy Planning Forum in 2002, discusses the impact of globalization on Israel’s economy and trade.

Globalization is a process of opening local economies to international markets in all economic spheres. Globalization has advantages; for example the fact that it enables investment portfolios to allocate resources more efficiently and to spread risk. However, there are also disadvantages, such as increased volatility and insecurity among wage earners, sensitivity to the spread of international financial crises, sharper business cycles, and the creation of restraints on the capability of employing a stabilizing macroeconomic policy. One of the clearest signs of globalization in Israel is the dichotomy between current real economic activity, which is stagnant but not in a depression, and capital markets, which are suffering from a lot of turmoil.

Technological improvements and progress are one of the important factors underlying globalization. In the 1990s, the information technology (IT) and communications sector in Israel grew five-fold, reaching 14% of GDP. The size of this sector increases the economy's vulnerability to exogenic fluctuations in the sector (similar to what has happened over the last two-and-a-half years). Furthermore, political-security instability is liable to lead to a flight of knowledge workers–and knowledge is this sector's main asset. Taken together, all of these factors create increased vulnerability that impacts on the entire economy.

Technologies are spread around the world mainly through large, multinational companies, an area in which Israel is weak. The number of Israeli multinationals (in the high-tech sector), as expressed in company size, is low. In other words, Israeli high-tech firms are usually small companies. It seems that failure occurs at two levels–above $10-20 million annually and above $100-200 million annually. Some believe that management failure is one of the root causes of this problem. Managers of Israeli firms are therefore advised to adopt a long-term, strategic management approach. At the same time, multinational companies should be encouraged to set up offices, laboratories, R&D and management institutions in Israel. Another proposal calls for the government to encourage and simplify corporate merger and acquisition processes in Israel and abroad.

In a global world, the proposed context for managing monetary policy includes a primary goal–long-term price stability--and a secondary goal–tempering business cycles. The main policy tool is short-term interest rates. In Israel there were two clear deviations from stable interest rate parameters; in 1998 and again in 2001. Both times, lowering the high interest rate created turmoil. Interest rate policy, in a global world as well, must therefore be stable (interest smoothing), while adhering to medium- and long-term inflation targets.

As for budget policy, the Ministry of Finance must be diligent in developing credibility regarding budgetary discipline. That is the standard in a global world. The budget should be rigid when it comes to current government expenses, but flexible regarding the impact on the business cycle through infrastructure investments. Absent this flexibility, a prolonged recession will ensue. Therefore, structural change should be instituted and a fiscal council of apolitical experts established that would determine the multiyear growth forecast. The purpose of this would be to create an attribution path for the budget, a forecast of income from taxes and multiyear budgeting of the National Insurance Institute. Moreover, new investments should be recorded using the resource accounting method as is done in Britain. In other words, the value of use of infrastructure capital (amortization and crediting real interest) is recorded as an expense. A balanced budget should be achieved from 2005 onward (within 1-2% of total balance), in a manner that would internalize the business cycle and resource accounting.

The process of exposing the Israeli economy to international trade has been completed in many spheres, and it must continue until it is fully completed, including in infrastructure spheres. The resulting advantages for the Israeli economy are clear, including lower prices and a higher standard of living. They also include a savings in foreign currency, stemming from cancellation of the trade anomalies that had previously existed. The question of legally institutionalizing various levies, including the anti-dumping levy, remained in dispute regarding the extent to which this tool should be used.

Employing foreign workers has advantages, such as maintaining reciprocity with countries where Israelis are employed. The disadvantages include delaying technological improvements, lowering wage levels and undermining Israeli workers, violating social rights, etc. In order to strike a balance so that on the one hand there will not be a mass expulsion of foreign workers, while on the other, the local labor market is not flooded, a proposal was made to establish a government authority that would bring regulation to the various sectors of the economy, as needed. The immigration authority recommended by a committee headed by Yuval Rachelovsky is a step in the right direction. Still, it should be recalled that replacing foreign workers in Israel is problematic. In agriculture, for example, it is well known that workers are paid only 55-60% of the average wage, and therefore it is unreal to expect Israeli workers to replace foreign workers. In construction, however, as in other industries, higher wages can be paid, so Israelis can be brought in to replace foreign workers. At the same time, there is a need to tax foreign workers, since ultimately they too will enjoy social service benefits. Additionally, the monopoly of the manpower companies importing them must be diminished, thereby lowering the economic interest that exists in bringing foreign workers into Israel. This should be done by switching to a system that would provide employment permits to workers instead of to employers.