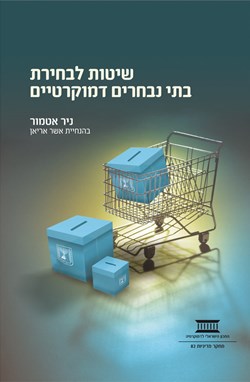 The nature of the electoral system by which legislative representatives are chosen is one of the more controversial issues in Israel, as it is in many democracies. The type of electoral system employed in a democratic state is generally considered to have a major impact on the filling of elective office; the conduct of both the voters and their elected representatives (and the connection between them); the public agenda; and the character of democracy. As such, it is not incidental that the debate over the reform of the system of electing Knesset members has been on Israel's political agenda since the founding of the State. In ordinary times, and especially in times of crisis, critics of the present system hasten to stress its drawbacks, downplay its advantages, and call for the reform of Israel's electoral system. The reform proposals primarily focus on three central aspects:

With the exception of minor adjustments to the legal threshold and to the electoral formula (the method employed to translate votes into seats), and apart from the period when the direct election of the prime minister was in effect (1996-2003), every attempt to generate reform in these three areas has been unsuccessful. It is now clear that in order to offer detailed and effective proposals for changing Israel's electoral system, it is necessary to be well-acquainted with the current global situation.

The purpose of this study - Electoral Systems for Democratic Legislative Bodies - is, first and foremost, to enhance the discourse on the subject. The book provides an in-depth discussion of the fundamental definitions and characteristics of democratic electoral systems, and an up-to-date chart of the prevailing electoral systems for legislatures in the democratic world, including numerous examples of voting methods and electoral reforms. It presents desirable criteria for assessing electoral systems, and examines the advantages and disadvantages of specific systems in accordance with these benchmarks; elucidates the weaknesses of the Israeli political system that are rooted in the nature of the elections, in general, and of the electoral system, in particular; projects the results of a regional electoral system had it been introduced in the elections in 2009; and formulates recommendations for dealing with the shortcomings of the present system.

The first section of the book offers a comprehensive picture of the electoral systems in 80 democracies at the end of the first decade of the 21st century. It deals extensively with the flaws and virtues of each system, categorizing the systems employed in states currently characterized as "free democracies," according to the definition of the independent watchdog organization, Freedom House. It also cites the political processes that have recently led certain democracies to modify their electoral systems.

The first three chapters present an in-depth survey of the extensive research literature with a focus on a description of the various types of electoral systems, as well as their features and political significance. Chapter 2 enumerates eight apt criteria for a good and effective electoral system, and discusses the political debate surrounding each reform:

The second section of the book begins by identifying the weak points of the proportional electoral system in Israel using the eight criteria enumerated in the first section, which form the basis of our assessment of the various electoral systems. These weaknesses are not new - they figure prominently in the vast research literature that has delved into Israel's electoral system since the country's founding. The emphasis is on recommendations that have been debated in various frameworks, and on proposed initiatives for changing one or more components of the electoral system for the Knesset. The primary objective here is not to bring a conclusive system of recommendations, but to propose a range of valid options for change, and to examine how each reform could affect election results. The proposed reforms fall into three key groups:

Chapter 9 presents an analysis of the projected results of the 2009 Knesset elections had the votes been tallied using a different method than the one employed today. In the current PR electoral system, voters cast one vote for a single party. Based on the results of these elections, we conducted four simulations of moderate multi-member systems (regional electoral systems in which each district elects more than one representative to the Knesset) that are suited to Israel. In all the simulations, voters cast one vote for a single party, but in each alternative, the districting was different. We deliberately chose moderate versions of regional systems whose results would reflect adherence to the principle of proportionality and would not be radical.

It emerges from every simulation that all 12 of the political parties that won seats in the 18th Knesset (2009 elections) would have passed the legal electoral threshold and been represented in the Knesset;With the exception of two cases: the national-religious party, Jewish Home, would not have won any seats in the first alternative (18 electoral districts) or in the second alternative (12 electoral districts, with surplus-vote agreements not taken into account) in other words, the relatively high representation of social groups and ideological parties would not have been harmed in terms of the entry of their representatives in the legislature per se. However, in all four scenarios, the two major parties, Kadima and the Likud, would have benefited from the adoption of multi-member electoral districts, receiving a larger number of seats. These two parties alone would have won a minimum of 60 seats (combined) in all four multi-member systems; or more precisely, at least 62 seats in the second, third, and fourth alternatives (12 districts, taking surplus-vote agreements between parties into account), and at least 72 seats in the first alternative (18 electoral districts, without surplus-vote agreements). The simulations also indicate that the three Arab parties - Balad, United Arab List-Ta'al, and Hadash - would not have been harmed in any way by the adoption of a multi-member system.

As for the other parties, some would have maintained their power, while others would have been weakened, albeit moderately. The ultra-orthodox parties (Shas and United Torah Judaism) would have lost only a small number of seats due to the concentration of their voters in the large cities, and the Labor Party, which won 13 seats in the 2009 elections, would have been forced to cede two seats to the major parties. The parties projected to suffer a greater blow are the national-religious parties (Jewish Home and National Union), which would have been absorbed mainly by the right-wing camp, and the New Movement-Meretz, which would have been assimilated into the left-wing camp. The simulations make it clear that apart from the impact of the reform on the election results, the major contribution of a multi-member system would be the very fact of adding a regional element to the elections, whereby several Knesset members would be elected by district.

The move to regional elections could have a moderating effect, if only slightly, on unexpected election results. The reasons for this are twofold: first, the proposed multi-member electoral districts intentionally represent large geographic areas, thereby maintaining moderate proportionality in the distribution of seats; and second, two of the alternatives (the third and fourth), would give several seats as national compensation to parties harmed by the regional distribution of seats. These changes would enable regional representation, thus strengthening the connection between the voters and their elected representatives, and perhaps even reducing the number of parties winning representation in the Knesset.

2. Changing the ballot structure by adding a personal element

The study indicates that in 23 democracies with a PR system, voters have the power to influence the fate of some, or even all, the candidates on the party list. Two of the proposed changes in the design of the ballot are relatively minor: the first entails a slight modification of the existing ballot, making it "partly flexible," that is to say, in addition to voting for a party, the voter would be able to cast one personal preferential vote for the candidate on the party list that he or she considers most suitable (as is the case in several countries, for example, Austria, Denmark, and Sweden). The chief drawback of this method is that such a measure would not necessarily have an impact on the election results. A second option is to expand the ballot, meaning that the vote would still be by party, but voters would be able to cast a preferential vote for more than one candidate. This system is also known as the "semi-open system," and a similar form is customary in eight democracies (e.g., Belgium, since 2003).

The determination of the type of ballot best suited to Israel raises four issues:

Chapter 10 comprehensively discusses the prevailing methods employed in many democracies to encourage voter participation, and recommends the adoption of those best suited to Israel. One of the principal recommendations involves modifying the Election Law (sections 68a and 71b) to allow each person to vote at any polling station - not only at the polling station where he or she is registered (based on the voter's address listed in the Population Registry prior to the closing date of voter registration) - since the aim is to make voting easier and more accessible to the voter.

The primary conclusion arising from this study is that in order to address the shortcomings of Israel's electoral system, which have led to the weakening of the political parties, to political instability, and to increasing public mistrust of democratic institutions, it is necessary to moderately reduce the extreme proportionality that characterizes Israel's current system, while preserving the principle of representation of social groups and interest groups. The electoral reform proposed in this book aims to simultaneously maintain a just division of power between the parties, as well as to enhance regional representation and the representation of the peripheral areas in national politics; the connection between the voters and those they elect (the level of responsiveness and accountability of elected representatives must be improved); the influence of voters on the composition of party lists by adding a personal component to the ballot; and finally, voter turnout (the phenomenon of the substantially low voting rates in the 21st century is referred to as "voter fatigue"). Reform along these lines is considered appropriate and acceptable in many established democracies. It is also suited to Israel and may lead to greater political stability, as well as strengthen the government's capacity to govern.