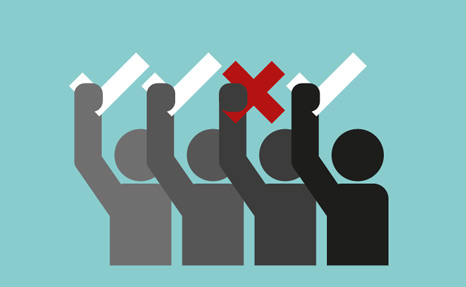 In the period leading up to the elections for the 20th Knesset, we set out to evaluate the internal democracy of the various parties running for election by means of the Intra-Party Democracy Index. As we see it, democracy has many facets, which parties may balance as they see fit and in accordance with their worldviews, and the existence of democracy within parties is, of course, very important. The comprehensive questionnaire used to measure intra-party democracy in Israel was first developed before the 2013 Knesset elections, based on the extensive knowledge that our research team has accumulated about political parties and intra-party democracy both in Israel and abroad.

How Does the Intra-Party Democracy Index Work?

In this evaluation, the level of intra-party democracy in Israel was examined by means of a questionnaire that was used to generate for each party a score ranging from 0, representing a total absence of internal democracy, to 100, representing the maximum amount of internal democracy. (The questionnaire can be found below in its entirety.) The dilemmas that arose during the course of the examination were discussed and settled within the broader forum of our Political Reform research group at the Israel Democracy Institute. In borderline or doubtful cases, we tended to be generous. When we could not decide between two possibilities, we gave the party a score that represents the average between the two.

The Intra-Party Democracy Index evaluates parties rather than electoral lists. The party was chosen as the unit of analysis because it is the parties, not the lists, that select their leaders and Knesset candidates, and they are the bodies that have members and extra-parliamentary institutions. In the case of multi-party lists (“joint lists”), we examined each party separately. Thus, for example, we evaluated the internal democracy of the Labor Party and of Hatnua separately, rather than evaluating the internal democracy of the joint Zionist Union list made up of these two parties. Since many of the bodies contending in the Knesset elections in Israel, especially this year, are joint lists, we have presented data for them as well, based on a weighted average of the scores of their component parties (see Figure 2).

The 2015 Index examined every party in the outgoing (19th) Knesset that is running for the 20th Knesset, whether separately or as part of a joint list. We also evaluated three new parties that were not represented in the 19th Knesset: Kulanu, Yachad, and the National Jewish Front. These parties were included because public opinion polls published in the media often predicted that these parties will pass the electoral threshold.

The full questionnaire, the findings of the evaluation, and additional background on the tools used can be found below.

Participation and competition are fundamental aspects of any definition of democracy. Representation—i.e., the reflection of the will and opinions of the voters—is also a vital element of modern representative democracy. In order for an elected government to be democratic, there must be transparency, which makes monitoring the government's activity possible, as well as a certain amount of responsiveness, which in this context means responsiveness to the party’s representative bodies. The questionnaire thus reflects the view that intra-party democracy is important because it reinforces democracy in general, and the view that democracy has multiple dimensions that political parties balance at their discretion in accordance with their particular worldview.

These five dimensions were evaluated in this study as follows:

The Intra-Party Democracy of Joint Lists

Although the main focus of the Index is Israel's political parties, it also considers the degree of internal democracy in the lists running for the 20th Knesset. These include two types of lists:

1.3 Who selects the candidates for inclusion in the party’s Knesset list? (5%)

1.5 Who of the following participated in writing or approving the party platform? (5%)

1.6 Who of the following took part in ideological debates conducted by the party in the last four years? (5%)

2.1 What percentage of realistic spots on the party list are held by women? (5%)

2.2 What is the value of the weighted Women Ranking Index (i.e., not just the number of women in realistic slots, but also their placement on the list)? (5%)

2.3 What percentage of the party's Knesset members are women? (5%)

2.4 Does the party employ special mechanisms (e.g., reserved spots, districts) in order to guarantee representation of the following groups on its Knesset list? (10%)

3.1 Has there been a contest (with two or more candidates) for the position of party leader since the last general elections? (10%)

3.2 Have there been elections for the party's institutions during the last four years? (10%)

5.1 How easy is it to obtain a copy of the party constitution or bylaws? (5%)

(For the overall weighting, the number will be divided by 2 and rounded to no more than 10 points)

Participation: The Index examined who takes part in making important decisions, such as choosing the party's leader and Knesset candidates.

Representation: The Index examined the extent to which women and other groups (minorities, residents of the periphery, new immigrants, young adults, senior citizens) are included on the party’s Knesset slate.

Responsiveness: The Index examined whether the party has elected representative bodies that are active and whether those bodies influence key party decisions and policy.