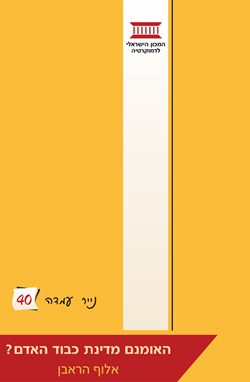 This paper offers a survey of the status of human dignity in Israel, including a detailed proposal for change. It discusses the areas in which human dignity is abused in Israel, and offers a process for change that encourages participants to not only view human dignity as an abstract value, but to also explore its actual expressions in their daily experience.

Every human being has a deep need to be respected as a human being, and not to be humiliated nor harmed. The respect of human dignity is indeed a core value in most human cultures. In Judaism it derives from the ancient perception that all humans are created in the image of God. In Israel, since 1992, it is expressed in the Basic law of Human Dignity and Freedom, a law which connects the values of Israel as a Jewish State and as a democracy.

However, the test of human dignity is not in its expression as a verbal value, or as a law, but in the daily behavior of every person in relation to other persons. Does one indeed recognize, in every relationship, the humanity of the other, by relating to her or to him in a positive way? Or is one indifferent to the humanity of many others, or even relates to them in ways, which are humiliating?

Most Israelis share the perception that the condition of human dignity in Israel is problematic. There are of course tens of thousand of Israelis who daily practice the respect of human dignity - in their families, at work, in relationship to persons belonging to other groups. Yet, according to repeated public opinion surveys most Israelis attach to "who is an Israeli" mainly qualities of rudeness, intolerance, incivility and loudness.

Human dignity is harmed in Israel in several major areas:

The basic law on Human Dignity and Freedom has thus far not contributed to a change in the behavior of most Israelis. Indeed, most of them have never even read the law. A core question for the future of Israel is therefore: How can we make the respect of human dignity a prevalent behavior?

Obviously, this cannot be achieved by orders from above. The way to develop individual and group awareness of this human need is through a continuing process. With a group of behavioral – organizational consultants we have developed over the past eight years such a process, in different organizations. This is a top-down process involving all the staff in an organization-from the top manager to all members. The key to the process is to discuss the respect of human dignity not only as an abstract value, but mainly to explore its actual expressions – for better or worse – in the daily experience of the participants. Such a process, accompanied by regular feedback, has begun in several schools, municipalities, army and police units and other organizations. The results are positive but these are only beginnings.

The open question for the future is: Will the number of leaders of such a process increase? And will human dignity indeed become a leading value in Israel in the coming decade?