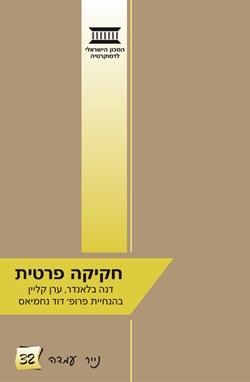 This policy paper focuses analyzes the ramifications of the increase in the number of private member bills submitted by Knesset members and includes recommendations for overcoming the resulting difficulties of governance.

Private member’s bills are one of the defining marks of legislatures all around the world. The right to initiate legislation is one of the basic functions fulfilled by parliament. Nevertheless, in most Western democracies government initiates the lion’s share of bills.

Contrary to the legislative picture in other parliamentary democracies, in which the government is the main force in initiating legislation, in Israel, we have witnessed over the last decade a shift in the balance of legislation. Not only do Knesset members hand in thousands of bills (in the three years of the current Knesset, members handed in more than 4000 private member’s bills), but also more than half of the bills that are approved are private member’s and not governmental bills. Not only had the volume of private legislation changed, but its content too. Some of the private member’s bills with far-reaching financial implications challenge the budget framework as approved by the government and Knesset. In the current Knesset, the cost of private member’s bills that were approved as laws amounted to billions of shekels. In Israel, unlike in other Western parliaments, there had not until recently been any restriction on presenting a private bill with financial implications.

In this position paper we are trace the roots of this unique Israeli legislative phenomenon. In order to do so, first we present the theoretical and comparative background, discussing the functions of parliament in a democratic regime. Parliament is viewed as embodying one of the basic paradoxes of democracy: the tension between governability and representativeness. The balance between these two poles is the key to determining how successfully a parliament and its members function.

Then we examine the dramatic change that has taken place in the legislative ‘division of labor’ in Israel. The detailed data demonstrates that a major change has occurred in the volume of private legislation in Israel, especially over the last decade. We believe that the increase in private members’ bills, and the fact that the members of the Knesset initiated half the legislation in the last three parliaments, is a symptom of a governabilitycrisis.

We then explore the processes that led to the governability crisis, specifically the ill effects of the system of direct election of the prime minister. We perceive the change in the volume of private member’s bills and the change in their content merely as a symptom of institutional malady. In order to decrease the number of private member’s bills with considerable financial implications, we believe that a major reform of the process of budget approval is needed, whereby the input of the Knessetmembers is made in the early stages of designing the budget and not after the budget has been approved. We also suggest a more general reform of the work of the Knesset and the separation of powers between the executive and the legislative branches. For example, implementing the “Norwegian Law” could improve the work of the Knesset, since more members of the Knesset would be able to act as members of the legislature. Knesset committees also need to be reformed, and a code of legislation between the government and parliament should be established.