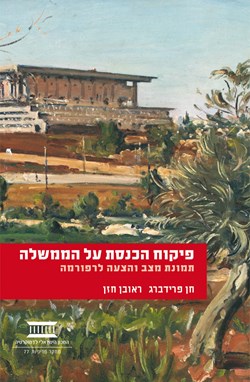 Legislative Oversight of the Executive Branch in Israel:

A Hebrew booklet for decision-makers that summarizes recommendations made in two IDI publications: Legislative Oversight of the Executive Branch in Israel and Reforming Israel's Political System.

Oversight of the executive branch is among the most important tasks entrusted to the legislature. This study surveys Israel's system of oversight analyzes its shortcomings and limitations, and outlines a structured, coherent, and comprehensive program of reform.

Among the most important tasks entrusted to the legislature in a democracy is overseeing the executive branch. The goal of this study is to present Israel's current situation in this area - its shortcomings, limitations and obstacles - and to outline a more expedient reality in the form of a structured, coherent and comprehensive reform program.

To date, no proposal has been formulated for sweeping, in-depth reform in the area of parliamentary oversight of the government in Israel. The reform proposed here, which addresses the changes that are required to improve such oversight, is unique in that it deals, first and foremost, with the need to change the structural foundation and parliamentary culture of the Israeli Knesset. Only then does it turn its attention to the more formal phase of legislative amendments and procedural reforms, which completes, but cannot substitute, the process of structural and cultural change.

The first chapter focuses on the role of parliamentary oversight from various perspectives - the historical, theoretical, conceptual and comparative. This chapter opens with a discussion of the origin of the concept and its classical definitions as interpreted by early philosophers, such as Charles Montesquieu and John Stuart Mill. From among the abundance of modern definitions of parliamentary oversight, we have adopted the definition that classifies the concept in terms of "strong" political oversight (culminating in the ability to topple a government by way of a no-confidence vote) and "weak" administrative oversight. We have focused our discussion on the "weak" and academically neglected form of oversight, which encompasses all the ongoing, systematic activities of verification, investigation, inspection, criticism and condemnation, challenge, preliminary inquiry and the call for government accountability, which are all conducted through a variety of parliamentary mechanisms.

This chapter expands on certain core questions: the role of oversight in the network of interactions in a parliamentary regime (in reference to prominent studies on aspects of the relationship between the legislative and executive branches that refer to the issue of oversight by the legislature); the prevailing approach to the study of this matter in general (the attitudes toward the relationship between the branches of government); and the structural-governmental factors that affect the scope of oversight in a parliamentary regime (political parties, coalition and opposition, party discipline, the parliamentary majority upon which the government depends, etc.); the institutional mechanisms through which parliamentary oversight is conducted (various committees, the State Comptroller's Office, the state budget, parliamentary questions and motions for the agenda); and the efficacy of legislative oversight in parliamentary regimes. We examined the last question by means of a comparative survey of the major oversight mechanisms available to parliaments worldwide, which allowed us to formulate a basic generalization concerning the identification of the conditions that are required to reinforce the function of parliamentary oversight using these instruments.

Finally, the chapter challenges the impression that the ability of the legislature to oversee the executive branch is almost totally powerless in a parliamentary regime as compared with its presidential counterpart. While it has been proposed that the democratic states be situated on an imaginary continuum of oversight, with the parliamentary regime at the "weak" extreme and the presidential regime at the "strong" end, closer scrutiny reveals that parliamentary regimes are not clustered at the lowest end of the spectrum ("zero" indicates lack of oversight), but are dispersed along its length from the lowest extreme to the range of presidential regimes. This continuum, which reflects the many nuances of reality, primarily suggests that it is possible to bolster the oversight capacity of the legislature in a parliamentary regime by introducing or strengthening central oversight mechanisms, as well as by means of structural and political reforms.

Chapter 2: The Oversight Potential of the Knesset

The second chapter focuses on the identification and the assessment of the oversight potential of Israel's Knesset, emphasizing the failures, limitations and obstacles that impinge on this capacity as described in the professional literature and in the present findings. This section begins with an elaboration of the fundamental theoretical question addressed by the study - the theoretical oversight potential of parliaments - and presents arguments supporting the rationale for examining, first and foremost, the Knesset's capacity to effectively oversee the government (the system's input) before examining the actual effectiveness of its oversight (the system's output). The structure and parameters of this theoretical framework were particularly adapted to test the oversight potential of the Knesset. This discussion emphasizes that the advantage of applying this theory to the Israeli context is that it enables the oversight process to be broken down into stages, which makes it possible to pinpoint the shortcomings and limitations of the process even before assessing the degree of efficacy of legislative oversight.

In addition to the conceptual framework, the second chapter presents the study's time frame (the 16th Knesset, 2003-2006); the population of the study (four of the Knesset's permanent committees: the Education, Culture and Sports Committee; the Internal Affairs and Environment Committee; the Labor, Welfare and Health Committee; and the State Control Committee, as well as 100 randomly selected parliamentary questions that were directed to the Ministers of Education, Interior, Environment and Health); the research methodology (analysis of the protocols of the selected committees in three principal areas subject to Knesset oversight - education, internal affairs and health - and an analysis of the content of the randomly selected parliamentary questions); and the methods of examining the variables (the construction of a continuum of oversight potential on which all the oversight mechanisms under study are placed according to the level of their oversight potential).

This chapter presents the findings regarding the oversight potential of the Education, Culture and Sports Committee, the Labor, Welfare and Health Committee, the Finance Committee, the Internal Affairs and Environment Committee, and the State Control Committee,  as well as the parliamentary questions from the 16th Knesset that were examined. To complete the picture, we present the findings that emerge from the professional literature with respect to fundamental institutional and regulatory flaws that are built into the Israeli parliamentary system, and whose very existence hampers the ability of the Knesset committees to oversee the government from the start. The empirical data as a whole indicate that the oversight potential of the committees and the parliamentary questions in most of the 14 indices examined ranks as low to mediocre at best, and in only a few instances is it found to be high.
The conclusion from the findings is that there is a need to strengthen the oversight potential of the mechanisms that are available to the Knesset for the simple reason that, without such measures, the chances that these instruments will be able to function effectively are minimal from the outset.

Chapter 3: Performance of the Knesset Compared with Its Oversight Potential

The third chapter assesses the actual performance of the Knesset and its committees, particularly in overseeing the government in light of its oversight potential as described in the preceding chapter. We present the findings regarding the performance of five committees in overseeing the executive branch of the 16th Knesset - the Education, Culture and Sports Committee, the Internal Affairs and Environment Committee, the Labor, Welfare and Health Committee, the State Control Committee and the Finance Committee. The empirical data indicate that, of the 12 indices examined, the committees' performance in the majority of the areas measured is poor to mediocre at best, and is ranked as good in only a few cases.

The obvious conclusion arising from the findings is that the Knesset's "nerve center," that is, its network of permanent committees, is impaired to a certain extent. This is a result of both the low to mediocre potential of the oversight instruments at its disposal and the actual performance of the Knesset committees in overseeing the executive branch, which was unsatisfactory in most of the instances studied.
Therefore, it is our opinion that, more than ever, the Israeli parliament is in need of a fundamental, systematic, comprehensive program of reform in the area of government oversight that will treat the roots of the historical, cultural, institutional and procedural flaws that have characterized it almost since its inception.

Chapter 4: Proposed Reform in Government Oversight by the Knesset

The study findings indicate the urgent need for reform in the Knesset's oversight of the government, which is discussed at length in the fourth and final chapter. This conclusion, which is not new, has been stated in other studies that have dealt with many aspects of the Knesset's activities. However, none of these studies has focused on the reforms that are needed in the area of parliamentary oversight, which are generally only mentioned as a by-product of the central subject matter of the study. The issue of parliamentary oversight has also been addressed in internal initiatives by the Knesset itself. The prime example of this is the reform promulgated by the Speaker of the 17th Knesset, which deals in large part with legislative amendments and procedural reforms.

Hence, it is clear that no comprehensive, in-depth proposal for reform has yet to be drafted with respect to government oversight by the Knesset that would address not only the formal aspect, as reflected in changes in legislation and procedure, but also, and primarily, the roots of the historical, institutional and cultural problems that have characterized the Israeli parliament practically since its founding. For this reason, we decided to formulate, for the first time, a blueprint of the requisite reforms in this area, and to propose a systematic set of recommendations to improve parliamentary oversight in Israel. The proposed reform is based on both the empirical findings of the study and on important pertinent recommendations, which have already been proffered in the past in various frameworks and have been refined. Our primary goal is not to undermine or hamper government activity, but to significantly improve and streamline parliamentary oversight in order to strengthen the Knesset, and to indirectly make the operation of the government more efficient and more productive.

The proposed reform consists of three levels: the first is the most basic and the most important phase, which involves a change in the perception of oversight in the Knesset; the second level complements the first to a large extent and treats the structural-systemic-organizational changes that will improve the potential of the Knesset to oversee the government and the effectiveness of the oversight mechanisms; and the third level addresses the more formal aspect of oversight and focuses on legislative, regulatory and procedural changes. The goal of the third level is to reinforce and supplement the changes proposed in the first two levels.

The following list of recommendations is divided according to the three levels:

First Level: Recommendations Pertaining to a Change in the Perception of Government Oversight by the Knesset.