The Knesset is one of the smallest parliaments in the world, in terms of legislators per capita. As a result, the effectiveness of the Israeli parliament is diminished, especially regarding the important task of overseeing the executive.

In late June 2017, a bill to increase the number of MKs to 140 was put forward, based on the argument that Israel has a relatively small parliament that creates an ever-growing burden on legislators. In this overview, I will argue in favor of such a reform. The Knesset is indeed one of the smallest parliaments in the world, in terms of number of legislators per capita. Its small size is further emphasized by two features of the Israeli political structure: the fact that almost all cabinet ministers concurrently serve as legislators, and the lack of an intermediate administrative layer between the central government and municipalities. Thus, the pool of elected representatives is very small in comparison to other countries.

According to this formula, the size of parliaments is not expected to be constant but rather change according to demographic developments. Indeed, in several countries the law stipulates periodic adjustments of the size of parliament. In Canada, for instance, the number of MPs was increased prior to the 2015 general elections to 338. In Australia, the number of MPs has increased from 125 in 1970 to 150 (see additional examples in Table 1). In other countries, there have been no changes made to the size of parliament. Notably, the number of congressmen in the US House of Representatives has been set at 435 since 1911. In Israel, the number of MKs has never changed from the initial number of 120 that was set with the establishment of the state. The reduction of the number of MPs is a more seldom occurrence and usually takes place not as a result of population shifts but for other reasons such as reorganization of administrative structures. In Belgium, for instance, the size of the lower house was reduced in the mid-1990s from 212 to 150, to accompany the transition to a federal state structure.

Table 1. Number of MPs (single or lower house of parliament) at three defined points in time

So, is the Israeli parliament exceptionally small by international standards? In order to examine this question, we compared Israel to 17 countries that share two important features: first, they are all developed countries with a parliamentary system of government; second, their population is between 4.5 and 12 million, putting Israel (with 8.5 million) right in the middle of that range. Figure 1 demonstrates that Israel is located furthest from the average line.In countries with a bicameral structure (two houses of parliament – Austria, Belgium, Czech Republic, Ireland and Switzerland) the representatives of the two houses were considered.

Figure 1. Population and Size of Parliaments in 18 countries 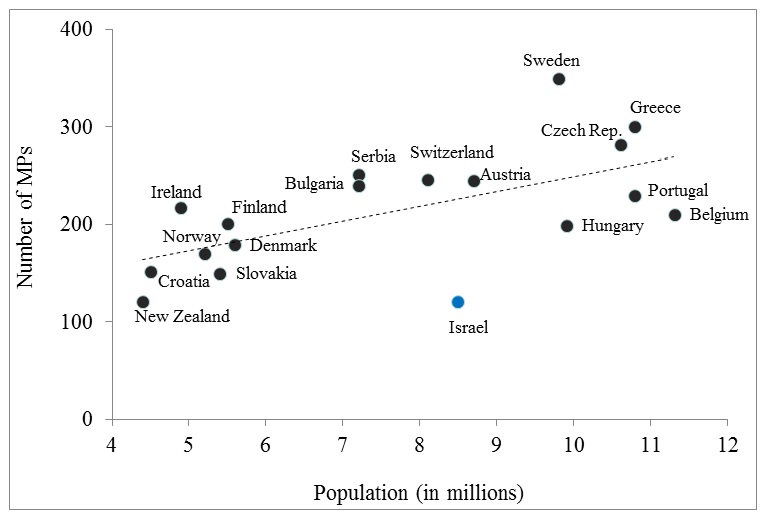 The figure demonstrates that within this group Israel has the smallest parliament, both in absolute terms (it shares this distinction with New Zealand's legislature) and relative terms. Adding to the equation the lack in Israel of an intermediate administrative layer between the central government and the municipalities, will farther emphasize its small number of elected representatives. Such an intermediate layer of government can be found not only in federal states, but also in unitary states that nevertheless devolve political power. Some of these administrative units (“states”, cantons, districts, regions – the names vary) have elected legislative bodies, which add to the number of elected representatives.[2] Table 2.2 summarizes the number of elected representatives in 15 countries that share common features with Israel. It details the number of MPs at the national level plus the members of elected legislative bodies who serve in sub-national units (excluding the local municipal level). Again, Israel stands out with its very small number of elected representatives.To make a point, the 535 elected representatives in the US congress (435 congressmen and 100 senators) seem a rather small number for a nation with a population above 320 million. However, if we add to these the more than 7,000 state legislators, we receive a completely different picture. Together with Bulgaria, Ireland, Finland and Hungary, Israel forms a group that has no upper house or sub-national unit. However, Israel has much fewer elected legislators then the rest of this group.

We have thus established the following argument: Israel's Knesset is disproportionally small. More importantly, we maintain that beyond this fact, the small number of MKs has negative consequences on the way the Knesset functions. The combination of a small parliament and large government (the number of ministers and deputy-ministers in Israel is very high in proportion to the Knesset size - and almost all of them are MKs) results in even fewer legislators who are free to perform the important parliamentary functions of representation, quality legislation and especially executive oversight. The scarce number of available MKs creates a reality in which each MK is assigned to be a member on several parliamentary committees. This undermines their ability to acquire the experience needed to effectively specialize in one core issue (e.g. security, finance, social welfare, education), as is the norm in other countries. This also leads to committee meetings not usually being well attended. The result is less professional MKs, who don't have the ability to effectively fulfill their oversight responsibilities.

Increasing the number of MKs is an essential reform whose time had come. Together with several supplementary measures – the reduction of the number of ministers, the addition of one more weekly working day for Knesset committees and overlapping the permanent committees with the primary ministries – will enhance the effectiveness of Israel's parliament and improve the quality of its work.

Table 2. Number of Legislators in 16 Countries