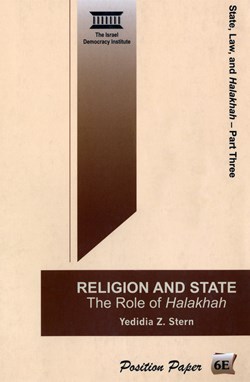 Religion and State: The Role of Halakhah

This policy paper proposes strategies within Jewish law for Orthodox halakhic renewal, in light of the threefold challenge of the establishment of the State, the phenomenon of secularism, and the loss of Halakhah’s dominance among the Jewish public.

This policy paper proposes strategies within Jewish law for Orthodox halakhic renewal, in light of the threefold challenge of the establishment of the State, the phenomenon of secularism, and the loss of Halakhah's dominance among the Jewish public.

Chapter One: Jewish Law and the Problem of Religion and State

A. Halakhic Law Loses Supremacy
B. The State of Israel
C. Secularism
D. Back to "Religion and State"

Chapter Four: On the Possibility of Halakhic Adaptation

A. Without the Temple
B. Exile and Dispersion

The lack of any organized halakhic examination of questions relating to religion and state is a blatant oversight.This omission originates with the general attitude that halakhah is a fixed and unchanging legal system, and in any case,is incapable of forming new solutions to cope with the new reality and the challenge faced by halakhah with the establishment of the Jewish State. The result is strange: Halakhah,although seen as standing at the core of the conflict between religion and state,is perceived as being irrelevant to the discussion on relieving that conflict.

This position paper argues that halakha's silence on the issues of religion and state is not only unnecessary,it is also inappropriate from a religious point of view.

Halakhah as the "living Torah" constantly operates within history and in response to changing realities.In our generation,we need halakhah to undertake a liberal consideration of three central phenomena:the establishment of the Jewish State,normative secularism, and the loss of the dominance of halakhic law among the Jewish public.The outcome of a discussion of these phenomena should be a halakhic response to key questions of religion and state.

The crux of this position paper is a proposal for four types of action strategies within halakhah for Orthodox halakhic renewal.These strategies serve as alternatives to conceptual inaction and legal passivity of the halakhic response in our generation to issues of religion and state. Each of these strategies poses challenges as well as difficulties for halakhic decisors,but there is only one alternative that would be even worse: the continued halakhic silence on issues of religion and state and hiding behind the paralyzing ruling that "the Torah forbids innovation.