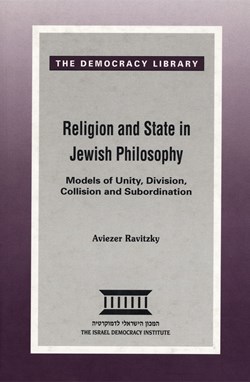 Religion and State in Jewish Philosophy:

This volume presents a selection of writings on issues of religion and state from the Golden Age of Jewish philosophy, which extended from the time of Maimonides until the expulsion of the Jews from Spain and Portugal. Prof. Ravitzky’s discussions of the texts highlight their contemporary relevance.

The relationship between religion and state is among the most pervasive questions in the political and cultural life of Israeli society. It is a matter that leads to the establishment of political parties, brings together coalitions and topples governments. It captures a central place in every public discussion on a constitution, the law and civil rights. It leaves its unmistakable mark on the relationship between Israel and Diaspora Jews (the Law of Return; the Conversion Law; Who is a Jew?). Moreover, it stands at the focal point of debate on Israeli identity and national culture. We can assume, therefore, that in the short- and long-term future, the relationship between religion and state will continue to be a locus of concern and controversy—communally, legally, ideologically, and existentially.

Not surprisingly, Israeli discourse on the question of religion and state contains certain assumptions about both "religion" and "state." Moreover, this discourse makes assumptions about how Jewish religion perceives the Jewish state. To begin with, there is a clear tendency to conceive of the political vision of religious tradition as being ideal and utopian, as if Jewish political thought dealt mostly with abstract models or with messianic symbols. (This is accepted generally among the haredim—the ultra-Orthodox—and occasionally in academic circles.) In addition, Jewish political theory is often understood to present one monolithic model, in which religion and state are united. (This view is current in Religious-Zionist circles and among many secular Israelis.)

This book takes issue with both these assumptions. Classical Jewish political thought did not focus only on the ideal kingdom but on a realistic state as well. It dealt not only with abstract and utopian concepts, but with patterns of actual historical struggle and crisis. True, Jewish thinkers developed their vision while living in exile, divorced from sovereign statehood and distanced from independence. Nevertheless, the nations of the world that gave shelter to the Jews also provided them with a live political "laboratory," and this in turn provided them with concrete experience in various methods of governing. Moreover, Jewish historical memory, as shaped by the Bible and the Midrash, does not at all focus on harmonious and serene visions of political life but rather on sagas of conflict between prophesy and monarchy and between the law and power.

The various Jewish political sources outline a much richer and more varied portrait than normally acknowledged regarding the possible relationship between theology and politics, between Torah and kingdom, or between religion and state.

For the sake of the argument, Professor Ravitzky has chosen the Golden Age of Jewish philosophy, namely, the political thought that flourished in Spanish-Jewish culture from the time of Maimonides until the expulsion of the Jews from Spain and Portugal. The various models expounded upon here are meant to illustrate the overall principle. These competing models have been in conflict, both publicly and covertly, for many generations and remain so even today.

This book is not intended solely for scholars but also for teachers, students, and all those interested in Israel's emerging social charter. Therefore, instead being limited to brief references to the sources, each model has been augmented with representative classical texts.

At the time of the writing of this book, Aviezer Ravitzky was a Senior Fellow at the IDI as well as Professor of Jewish Philosophy and Head of the Department of Jewish Thought at the Hebrew University of Jerusalem.

Chapter Four: The State in the Service of Religion – Rabbi Yosef Hayyun

Appendix: Religion in the Service of the State: Benedictus Spinoza