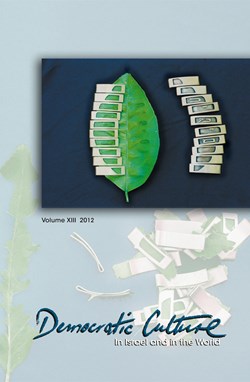 Democratic Culture in Israel and in the World, Volume XIII

A joint publication of IDI and Bar-Ilan University Press and Law School, this trailblazing academic journal serves as a platform for research and scholarly debate on both the universal aspects of democratic culture, as well as on questions related exclusively to Israeli democracy, with a focus on the relationship between the institutions and substance of democracy and the unique characteristics of Judaism and Zionism.

Israel's democracy is still in its formative years. Like a sapling, the depth of its roots and the span of its branches remain unclear. Democracy in Israel bears the deep imprint of Jewish history, a national narrative characterized by the lack of political sovereignty and the absence of a legacy of governance. Furthermore, the maturation process is complicated by the collective memory of a minority — a people repeatedly persecuted and unremittingly suspicious of the "other."

Today, the Israeli experiment presses on through a volatile period marked by the struggle of diverse communities of immigrants to mount a Zionist revival in an environment that abounds with existential threats. Israeli democracy seeks to balance these two rival civilizations, which are both powerful and firmly entrenched. One carries the mantle of Jewish tradition and history; the other, that of Western Liberalism. Each of these two civilizations has an exclusive set of value structures, norms, institutions, and authorities, and the relationship between them is dialectical and complex. Israeli Democracy continues to develop under the polarizing shadow and profound influence of these two systems.

This reality gives rise to a vital need to clarify and address questions related to the character of democratic life in Israel. For this purpose, IDI, in partnership with Bar Ilan University Press and Law School, launched Democratic Culture. This trailblazing academic journal is a platform for research and scholarly debate on both the universal aspects of democratic culture, as well as on questions related exclusively to Israeli democracy, with a focus on the relationship between the institutions and substance of democracy and the unique characteristics of Judaism and Zionism. We believe that the exploration of these relations will make a valuable contribution to Israeli society, enhancing national self-understanding and assisting us to chart our collective future.

Democratic Culture is an interdisciplinary and multidisciplinary journal that includes articles in relevant fields of study within the social sciences, humanities, law, and Jewish studies. Contents and abstracts for the English edition of Volume XIII can be found below.

"Leviathan and the Academia: Was there an Attempt to Nationalize the Hebrew University of Jerusalem in the Early Years of the State of Israel?" by Ari Barell

"The Growth of Conservatism in the United States, 1945–2008" by Arnon Gutfeld and Nir Zeid

"The Ultra-Orthodox Minority and the Israeli Mass Media: A Proposal for Cultural Dialogue Predicated on the Media's Role in Shaping Civil Society" by Moshe Hellinger and Tsuriel Rashi

"Carnival by Night: A New Practice of Modern Tikkun Rituals" by Anat Feldman

Leviathan and the Academia: Was there an Attempt to Nationalize the Hebrew University of Jerusalem in the Early Years of the State of Israel?

This article examines the relations between the Israeli political center and the Hebrew University of Jerusalem in the first years of statehood. After more than a quarter of a century of complex and tense interaction between the University and the leadership of the Jewish community in Palestine, the first decade of Israeli statehood witnessed the emergence of a close, almost symbiotic relationship between the state and the academic institution.

This article is a critique of the existing scholarship, which views the relationship between government and academia in those early years as an attempt by the government to impose state control and supervision on the institutions of higher education, and reduce their academic freedom. In contrast, this research provides a more complex and multidimensional picture, by pointing to the important part played by the academic staff of the Hebrew University in initiating the deep changes in the character and size of the institution; in forging new relations with the political center, and in shaping Israel's higher education policy.

In contrast to the picture portrayed by current research, of a confrontation between Academia and State resulting in the subordination of the former to the latter, the picture that emerges from this study is one of negotiations between the academic institutions and the political center, leading to close cooperation that served and strengthened both sides simultaneously, resulting in symbiosis and in the integration of the academic system into the newly emerging state order.

By Arnon Gutfeld and Nir Zeid

The article focuses on the description and analysis of the main ideas and major spokespersons of Conservatism, New Conservatism, and Neo-Conservatism in the United States in the post-World War II era, and especially from the 1960s to the end of the Bush presidency in 2008. The emphasis is on the intellectual, political, and social history of the various conservative phenomena and its translation by politicians into policy and reality that dictated and influenced American political behavior and policies.

The transition of the conservative movements from vocal minorities to ascendency in the governmental and political arenas explains the changes in the conduct of policies, especially in foreign relations, and explains Reaganism and the Bush "Revolution" in American foreign policy. Despite the fact that the 2008 elections brought a severe blow to this ideology, the article emphasizes the wide support of this worldview which will continue to influence the formation of future internal and foreign policies in the United States.

The Ultra-Orthodox Minority and the Israeli Mass Media: A Proposal for Cultural Dialogue Predicated on the Media's Role in Shaping Civil Society

By Moshe Hellinger and Tsuriel Rashi

The purpose of this paper is to offer a model for a communication-oriented reading of a religious tradition. This model, which is applicable to a modernized society torn by religious-secular conflicts, strives to establish a cultural dialogue between the secular media elite and a strictly religious public. The specific case with which this paper is concerned is the ultra-Orthodox community in Israel, whose relationship with the media is marked by tension, alienation, and even mutual hostility.

The paper offers a renewed reading of Jewish traditional, halakhic notions, thereby suggesting the importance of providing a remedy for the individual and his or her suffering through a communicative activity in the social arena. By applying the terminology of current communication theories, the custom of delaying the prayer, as it unfolded within the Jewish communities in Europe, can be viewed as a grassroots act of "setting the public agenda," which has nothing to do with the initiative of communal leadership. Seen in this light, both the Jewish halakhic tradition and the essential roles played by the media emerge as beneficial in strengthening society and reinforcing the democratization processes.

What has always made military cemeteries in the Western world unique is that they are a creation of the state, and have honored the demand for uniformity in graves and tombstones. A military cemetery conveys the state's collective identity as well as its myths and ethos. This article surveys the dramatic change that has taken place in the scenery of the Israeli military cemeteries since the establishment of the state and until today — the scenery has been transposed from a "collective scenery" to an "individualistic scenery." The article argues that these changes reflect the deep shifts in Israeli society — from a previously collective society to the current individualistic society.

One could have expected that in such a hallowed institution for Israeli society as the military cemetery — an institution that constitutes a building block of Israeli identity — the collective universal Israeli character, which finds expression in the uniformity and the equality of the tombstones, would have been preserved over time if not in perpetuity. This did not prove to be the case. The embellishments in all their variety on the tombstones, the changes in the uniform inscription, the legal recognition of the families' right to a personal inscription, the phenomenon of substituting compatible stones for the gravestones, and the placement of the fallen soldiers' portraits on the tombstones — all this in contravention of the law — constitute expressions of the transition to individualism in this sphere as well.

Carnival by Night: A New Practice of Modern Tikkun Rituals

The article deals with the reinvention of nightly tikkun ceremonies by the "X-Ray"Rabbi — Ya'akov Israel Ifargan — at the Netivot cemetery.

Tikkun ceremonies are mystical kabalistic ceremonies that are intended to resolve personal and community problems. They have standard prayers and times, and are conducted by students at synagogues.

In contrast, Ifargan's tikkun ceremonies are a reorganization of crowd politics in which mystics and sorcery play an important role. Ifargan invented a tikkun ceremony with a kabalistic framework, but its content is similar to pagan and Christian ceremonies. The components of such tikkun ceremonies are: strong fire, which is ignited and fed only by Ifargan, using thousands of candles; the singing by many which ostensibly causes thunder, angels and saints to descend from the sky in order to create personal miracles among the community of believers.

By Avi Sagi and Yakir Englander

"Halakhah" is a concept denoting a clear and defined normative system, which operates on the basis of its own rules. And yet, Halakhah engages in a complex relationship with changing reality: it does not necessarily accept its impositions, but often responds to it.

Our analysis showed that most religious Zionist halakhists chose to deal with this question by changing the halakhic discourse per se rather than by resorting to standard halakhic argumentation. The discourse became pastoral. A decisive majority of religious Zionist halakhists ceased dealing with the normative status of masturbation, and focused on questions of identity and redemption. In the context of the article, we examine the various modes of halakhic and pastoral discourse developing in religious Zionism and examine the reasons for change in the halakhic discourse. As we show, this change is the most significant proof of some degree of internalization of modern values in religious Zionism, because a pastoral discourse is one that internalizes the basic modern values that place individual identity at the core.

Democratic Culture in Israel and in the World, Volume XI

Democratic Culture in Israel and in the World, Volume XII

Each volume of Democratic Culture in Israel and in the World costs NIS 100 plus shipping.