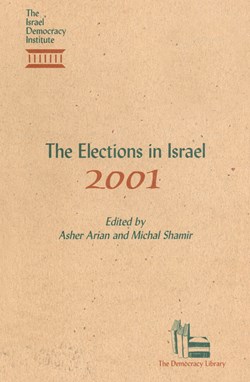 The Elections in Israel 2001

This study presents an analysis of the first direct elections for prime minister, which took place against the background of the outbreak of the second intifada following the failure of talks between then Prime Minister Ehud Barak and the Palestinians.

The special elections held on February 6, 2001 constituted the last chapter in the Israeli political saga known as the direct election of the prime minister. A month after the elections, and a short time before Sharon's national unity government took office, Israel returned to the former electoral system for choosing a prime minister.

The 2001 elections were set in motion on the heels of Ehud Barak's resignation, with political, diplomatic and legal factors all doing their part in advancing the elections. Barak had been elected on a peace platform in May 1999, but his negotiations with the Palestinians failed, violence erupted and the terrorist attacks increased. Against the background of the loss of confidence in the peace agreements and in the government, the national agenda focused on security. Security and the territories were the issues that drove the 2001 elections and were central to the campaign.

Ariel Sharon won by a landslide - the largest margin in the history of Israeli elections - when he garnered an unprecedented 62.4% of the votes. However, one must take into account the fact that this was the first time there had ever been prime ministerial elections only, and that the turnout was the lowest ever in Israel's electoral history. Only 62.3% of the electorate voted, as opposed to the nearly 80% who usually came to the polls in previous elections.

This book surveys the main characteristics of the 2001 elections. Shamir and Arian look at the factors that influenced the vote choice and the decision whether to vote or abstain among Jewish voters. Jamal focuses on the Arab electorate and on the abstention rate among them, which was exceptionally high. Weimann and Wolfsfeld review the campaign, and Nachmias and Navot consider Sharon's post-election coalition. All the authors stress that the combination of the electoral system and the unique security situation is the key to understanding the 2001 elections.

Chapter One: Abstaining and Voting in 2001
Michal Shamir and Asher Arian

Chapter Three: The 2001 Elections - The Election Propaganda that made no difference
Gabriel Weinmann and Gadi Wolfsfeld