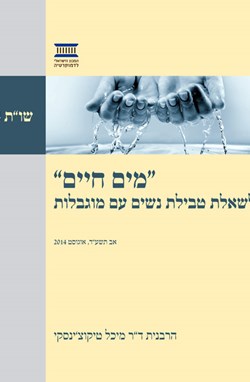 Handicapped Accessibility and the Mikveh

A contemporary responsum that offers real-world solutions that can protect the dignity and privacy of women with disabilities who seek to immerse in a Jewish ritual bath.

Women with disabilities face several problems when they go to immerse in the mikveh (ritual bath). These fall into two main categories:  the technical difficulty of entering a pool of water reached by steps and the need for respect for the dignity and privacy of the woman who is immersing.

In Israel, few mikvehs are equipped with a wheelchair lift to lower a woman into the pool. Such lifts also have operational limitations and are expensive to install. Moreover, even when a mikveh is equipped with such a lift, the woman needs physical assistance from the mikveh attendant to immerse, which exposes her to the eyes of a stranger. Most people would feel uncomfortable in such a situation, and women with disabilities or physical deformities all the more so.

The obligation to recognize the concerns related to the dignity of a woman with disabilities who immerses in a mikveh underlies the discussion in this booklet, which was written by Dr. Michal Tikochinsky under the auspices of IDI's Human Rights and Judaism in Action project.