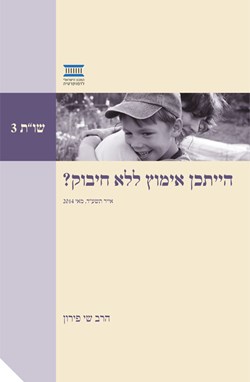 Physical Contact between Parents and Adopted Children in Jewish Law

A booklet that addresses the halakhic aspects of physical contact between parents and their non-biological children. Can physical expressions such as hugging or stroking be seen as a type of emotional therapy that would be permitted by Jewish law?

After all the traumas that children who don't have parents have experienced in their lives, they need a mother’s warm embrace—something that some of them have never known. Because they know that it is likely that this need will not be satisfied in a religious foster family, children who are candidates for foster care sometimes ask to be placed with secular families.

Written by Rabbi Shay Piron, this treatise addresses the halakhic aspects of physical contact between parents and adopted or fostered children. Are there grounds for seeing physical contact such as hugging or stroking a child or teenager as a type of emotional therapy that would be permitted by Jewish law?

The booklet is part of a series of responsa written for IDI's Human Rights and Judaism in Action Project, which aims to inform government agencies and the public sphere about the interplay of human rights and Judaism, with special emphasis on the integration into society of people with disabilities. The responsa series is intended to provide practical halakhic solutions to dilemmas that confront persons with disabilities in their daily lives.

Rabbi Shay Piron was a researcher at IDI who headed the Human Rights and Judaism in Action during the period before he joined the Yesh Atid political party and was subsequently appointed Israel's Minister of Education.