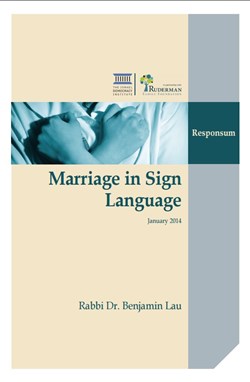 This contemporary responsum by Rabbi Dr. Benjamin Lau was written in order to convince the rabbinic authorities in Israel that sign language should be recognized as a language and that people who speak in sign language should have the same status as all other people when it comes to marriage. Available for free download in both English and Hebrew, it was produced under the auspices of IDI's Human Rights and Judaism in Action project.

There are some issues that you simply cannot believe exist until you encounter them firsthand. The issue before us is one of those.

Throughout the Western world, sign language as accepted as a language for all intents and purposes. When a person who speaks only in sign language comes to any of Israel's government offices, he or she is treated in an equitable manner, like any person who speaks a foreign language. I discovered, however, totally by chance, that when people who communicate through sign language arrive at the offices of the Israeli Rabbinate to register for marriage, they are treated differently. They have a different status than other people. They are considered "questionable." Their degree of intellectual independence is considered to be "dubious," and this affects their process of religious marriage. They are entered in the marriage registry as people who are "deaf," they must use a special Ketubah (marriage contract) for people who are deaf, and the marriage blessings recited during the marriage ceremony are even recited in a different manner that is prescribed for people who are deaf.

Once I became aware of this issue, I looked into its scope. It turned out that this is an old and established practice in the marriage registries in Israel. The responsum before you was written to convince the policy makers in the Israeli Chief Rabbinate to change their procedures so as to bring them in line with the common practice in the Western World. It is structured in chronological order, beginning with the reality of the Middle Ages and ending with the reality in our times. In each time period, I described how the system responsible for halakhic ruling responded to change during its time. The picture that emerges shows a steady process of change, in direct relation to the reality at the time.

I left the last line of the responsum for the policy-makers to write. Sign language has only been recognized as a language during the last few decades; as a result, the halakhic rulings  issued prior to that time did not fully address the question. After knocking on many doors, I found rabbis who are accepted as halakhic authorities by the Chief Rabbinate who were willing to assume the responsibility for writing this last line. After they issued their rulings, the Rabbi David Lau, the Chief Rabbi of the State of Israel, accepted the responsum, as can be seen in his letter of endorsement, and even issued a directive instructing marriage registrars in Israel to change the policy that has been in effect until today.

From now on, the status of people who speak in sign language will be the same as the status of anyone else who  registers for marriage in Israel.

One small step for the rabbinate. A bit of light that dispels much darkness.

I have perused your article on deaf persons in our day. The article covers the issue extensively, in all its aspects and ramifications. You have sagely presented the issues in their historical perspective, accompanied by a halakhic analysis and with outstanding sensitivity. Indeed, there is no doubt that the status of deaf persons is different now than it was in the past.

Today, in light of the changes in our ability to communicate with the deaf, and with the availability of new means and possibilities for them to express themselves in various ways, they should be treated as intelligent individuals for all purposes.

The major shift in the attitude towards the status of the deaf appears in Responsa Shevet Sofer (EH 21). There is no doubt that many even greater changes have taken place since then. Many contemporary decisors have ruled that deaf persons who communicate fully in sign language should be deemed intelligent individuals who are responsible for all their actions.

I am currently working to update the instructions for marriage registration and this outlook will be manifested in these guidelines.