On February 21, 2012, just before the High Court of Justice was to hear his petition, Palestinian detainee Khader Adnan agreed to end his life threatening hunger strike after Israeli authorities agreed to release him in April, at the end of four months of administrative detention. In this article, Attorney Elad Gil explores basic questions about the use of administrative detention in Israel and highlights lessons learned from the Adnan affair. For additional information, read the policy paper A Reexamination of Administrative Detention in a Jewish and Democratic State (Available for free download, English) 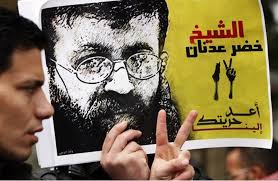 The hunger strike undertaken by Palestinian detainee Khader Adnan raised public awareness of administrative detention, a measure which Israel uses periodically with the sanction of Israeli law—especially in the West Bank, and very occasionally within the State of Israel itself. It would appear that Adnan's detention, his choice to go on a hunger strike, and the decision to release him, which was taken just before the High Court of Justice was to hear his petition, exposed the disadvantages of administrative detention and the defects inherent in this mechanism.

It is clear that even if the state's decision to release Adnan was correct in public and political terms, it is difficult to justify the State's handling of the matter in legal terms. If it was really so essential to detain Adnan in order to prevent him from being involved in terrorism, why would his hunger strike render him no longer "dangerous"? And if it was possible to release him following his hunger strike, why was it necessary to hold him in administrative detention in the first place?

The end of this affair, which damaged Israel's already battered image in the international arena, is a good opportunity for us to reexamine the need to use administrative detention as frequently as it is used by Israeli authorities.

What is "Administrative Detention"?

Although the theoretical justification for administrative detention is that it looks to the future—i.e., that it is intended to prevent the realization of a threat to state security-and that it is a preventative measure, in contrast with criminal imprisonment, which is punitive measure, the distinction between these two justifications of detainment is not at all clear. In most cases, suspects who have planned terrorist attacks have also committed criminal offenses during the process, and can be indicted and at times imprisoned for these offenses.

The real attraction of administrative detention is that it frees the State from the heavy burden of the rules of evidence and from the concern that it will have to disclose classified intelligence information to the detainee. Although the need to protect intelligence sources is real and vital, administrative detention as practiced today does not include a mechanism for providing suspects with the factual basis for their detention; as a result, suspects in such cases are usually denied the opportunity to mount a real defense. Even if we assume that the government always acts in good faith and genuinely believes that detainees are dangerous, the absence of a legal process in which both sides have the opportunity to present their arguments before an objective judicial authority is concerning and flouts basic constitutional values of the State of Israel: human dignity, the right to liberty, and the right to due process.

The United States is currently holding about 100 administrative detainees in the Guantanamo Bay detention camp. In legal terms, the basis of the Guantanamo detentions is different from the basis of Israeli cases; the detainees in Guantanamo Bay are held by virtue of the authority of the President of the United States as commander-in-chief of the armed forces, and it can be asserted with a great degree of confidence that their legal situation is more serious than that of detainees in Israel. In contrast to the situation in Israel, however, in the United States it is not permissible to place citizens in administrative detention. This is by virtue of a law passed by Congress in 1971, as the result of lessons learned from the mass arrest of American citizens of Japanese origin who were placed in administrative detention during World War II.

Does Administrative Detention Constitute a Breach of International Law?

The West Bank is governed by International Humanitarian Law, which regulates, among other things, the relations between an occupying force and the local population in areas under belligerent occupation. In addition, international human rights laws that provide basic human rights apply to civilians in the West Bank. Article 78 of the Fourth Geneva Convention permits an occupying power to use administrative detentions for reasons of national security; however this is conditioned on there being "imperative reasons of security" and the detainee must be given the right of appeal. The accepted interpretation of the Convention maintains that the detention must be in response to a specific danger posed by the detainee, and that administrative detention must be used extremely rarely because of the serious infringement that it causes to the rights of the local population.

What Can Be Learned from Khader Adnan's Detention?

It seems that in the Adnan affair, more is concealed than is revealed. The circumstances leading to Adnan's arrest and detention have remained classified, and it is not clear whether the decision to release him was the result of a change that made him less of a danger or was a result of the media's interest and the fear that Adnan's hunger strike would lead to his death and turn him into a symbol of Palestinian resistance. It may be cautiously estimated that the second possibility is more reasonable. The few facts known about Adnan indicate that he is not an innocent human rights activist but a senior figure in the Islamic Jihad (according to that organization's website). From the unclassified material that was published, it seems that at a minimum, Adnan was involved in incitement to carry out suicide attacks in Israel.

With all due caution, it would appear that even from the little we know about the case, the following general insights may be derived from it regarding administrative detention:

Administrative detention must therefore be used only as a last resort in the rarest of cases, after a concerted effort to find other alternatives. Similarly, it must be delimited by a fixed time frame. Many democracies involved in an ongoing battle against terrorism have come to this conclusion. Israel must reform the laws of administrative detention and simultaneously find solutions within criminal procedure laws and the rules of evidence that will reduce the need to use administrative detention. In the Adnan affair, Israel once again paid a high price in the local and international arenas. Hopefully, we will be wise enough to learn a lesson from this incident.

Elad Gil is a graduate of the Faculty of Law of the Hebrew University of Jerusalem and is currently attending the LL.M program in International Law at American University Washington College of Law in Washington, D.C.

A Reexamination of Administrative Detention in a Jewish and Democratic State (Elad Gil, Mordechai Kremnitzer, 2011).