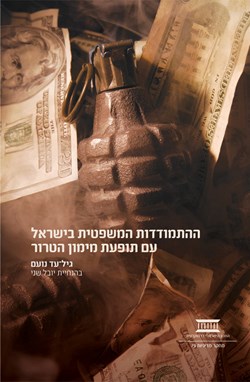 The Legal Battle against the Financing of Terrorism in Israel

This policy paper examines the challenge of effectively combating the funding of terrorism within the current legal framework, exemplified by Israel's Prohibition of Terrorist Financing Law 5765-2005. In light of the often legitimate origins of terrorist funding (e.g., charities), the authors explore the need to shift the focus away from the well-disguised origins of these funds to their clearly criminal destinations.

The diverse tactics of those who engage in terrorism to finance their activities and the increasing sophistication of terrorist organizations in obtaining funds pose both legal and practical difficulties to states confronting terrorism. In recent years, particularly in the wake of the events of 11 September 2001, there has been growing recognition that a key aspect of the war on terror requires focusing on the sources of the financing of terrorist activities and organizations. According to this approach, the fight against terrorism must not be limited to punitive measures or attempts to thwart terrorist attacks; wide-ranging and varied measures must also be taken to prevent terrorism from the outset.

The globalization of terrorism (as reflected in the cooperation between terrorist organizations around the world, in the existence of international terrorist organizations operating across borders, and in state support of terrorism) entails the increasing importance of the economic aspect of terrorism, and the expansion of the monetary infrastructure used to finance terrorism around the world. Numerous factors, such as the relative ease with which money can be transferred across state borders, and the difficulty of distinguishing between funds intended for legitimate purposes and those designated for terrorism make it harder to identify the monetary channels used to finance terrorism. Thus, effectively suppressing the financing of terrorism requires a high degree of international cooperation. Indeed, in recent years international forums have played a dominant role in developing a comprehensive legal foundation for the struggle against the financing of terrorism, and in coping with the difficulties and the complexity of this issue.

The legal foundations of the fight against terrorism, in general, and against the financing of terrorism, in particular, were established in Israel soon after it gained its independence. A major portion of this legal infrastructure is based on British Mandatory legislation that was automatically transformed into Israeli law. It was intended primarily for the fight against terrorism at the local level. The globalization of terrorism and Israel's ratification of the International Convention for the Suppression of the Financing of Terrorism (hereafter: the Financing Convention) necessitated a response from the Israeli legislature, which took the form of the Prohibition of Terrorist Financing Law 5765-2005 (hereafter: the Financing Law).

The Underlying Tension Between Combatting Terror and Human Rights

Waging an effective battle against the financing of terrorism through bodies that also (even primarily) engage in legal activity requires resorting to drastic inspection methods, which naturally raises the question of whether they disproportionally prejudice fundamental human rights and freedoms. The monitoring of the activities of charities and non-profit institutions, and the imposition of restrictions on them are liable to spark claims of infringement of fundamental freedoms, such as the freedom of association or the freedom of religion (in the case of religious institutions). Intervention in the activities of commercial enterprises and private businesses of various types can also generate claims of violation of such basic constitutional rights as freedom of occupation and the right to property.

There is obviously a conflict between the global and the local desire to effectively suppress terrorism and the duty to preserve democratic values and human rights - a duty that limits the ability of democracies to implement measures that cause severe and disproportionate harm to the rights and freedoms of individuals. At first glance, it seems that the fight against the financing of terrorism does not raise these critical questions to the fullest extent. Measures that focus on the sources of financing appear more "fair" as part of the war on terror in contrast to the methods employed against terrorist suspects, such as administrative detention, aggressive interrogation techniques, and so forth. Moreover, the argument can be made that an effective battle against the financing of terrorism would significantly reduce incidents of terrorism and would, thus, diminish the need to employ more severe measures.

The issues that are addressed in this book are especially important given their almost total absence in public discourse, and the paucity of academic writing and judicial rulings on this question. The debate on the tension between the war on terror and basic human rights focuses on the methods (referred to above) that are considered to be more severe, or more "newsworthy." The lack of genuine legal and public discourse on the subject of the financing of terrorism also stems from the fact that the Financing Law is relatively new and has not yet been subject to in-depth interpretation, or to the evolution of related case law. After reviewing the international legal framework for the suppression of the financing of terrorism, this book highlights several problems related to the arrangements Israel has adopted to counter terrorism funding. The courts and law enforcement bodies in Israel are expected to confront these issues over the next few years.

One problem is the fact that the Financing Law reestablishes and reasserts the judicial instruments that preceded its adoption and that have been used, inter alia, to suppress the financing of terrorism. These judicial instruments include the Defense (Emergency) Regulations of 1945, which were enacted during the British Mandate, and the Prevention of Terrorism Ordinance 5708-1948. The arrangements, which were set by Mandatory and Israeli lawmakers over sixty years ago, grant the authorities far reaching powers in the fight against terrorism, in general, and against the financing of terrorism, in particular. These powers harshly and disproportionally prejudice the fundamental rights of those allegedly involved in terrorism and of third parties, without providing for appropriate judicial review. Not only were these arrangements not annulled or modified by the Financing Law of 2005, but they were reasserted and approved by this law. Furthermore, more than four years after the entry into force of the Financing Law, the actual practices of the authorities in Israel with respect to the financing of terrorism reveal that the Defense Regulations and the Prevention of Terrorism Ordinance continue to serve as the primary instruments in dealing with the financing of terrorism, not only in the context of local terrorism, but also to fulfill Israel's international obligations. In light of the constitutional revolution in Israel following the adoption of the Basic Laws: Human Dignity and Liberty, and Freedom of Occupation in the early 1990s, and given Israel's international commitments related to the preservation of human rights, the Financing Law should have lead to the adoption of updated and more proportional instruments that would prevail over the earlier arrangements.

The Financing Law includes three criminal offenses that apply to the financing of terrorism at both the local and international levels. Countering the financing of terrorism by resorting to criminal prohibitions is appropriate as it ensures legal proceedings and judicial guarantees, which are inherently preferable to the far reaching administrative powers provided by the legislation that preceded the Financing Law, particularly the Defense Regulations. Nevertheless, this book raises two key problems in this context: first, since previous statutes continue to apply and to grant extremely broad powers to administrative bodies with less judicial review, the state authorities currently have very limited incentive to instigate criminal proceedings under the Financing Law. Also, in the criminal context, violations of the Financing Law do not nullify criminal liability under the previous statutes. In fact, the few criminal cases that were filed for violations of the Financing Law in recent years also included charges of violations of the Defense Regulations and of the Prevention of Terrorism Ordinance.

The second problem is that the Financing Law criminalizes some behaviors that should not, in my opinion, be subject to criminal liability. The primary difficulty in this context concerns the offense of refraining from reporting suspicions of the financing of terrorism. It would appear that Israeli lawmakers went too far in setting the parameters of criminal activity under the Financing Law. This conclusion also emerges from an analysis of comparative and international law with respect to the suppression of the financing of terrorism.

The Financing Law includes provisions related to the freezing and seizure of terrorist assets. As a rule, these provisions offer due guarantees for the protection of fundamental rights of individuals, organizations, and third parties that are liable to be harmed by the freezing or seizure of such assets. The Law provides for administrative and judicial review mechanisms as part of the proceedings for the freezing or seizure of terrorist assets. The main problem is that the freezing and seizure procedures under the Financing Law apply only to terrorist organizations or individuals that have no connection to Israel (except in cases in which assets are frozen or seized as part of criminal proceedings under the Financing Law). In cases in which the terrorist organization or individual in question has a connection of some sort to Israel (and this extends to the vast majority of cases that are actually handled by the Israeli authorities), the broad administrative powers granted by the Defense Regulations regarding restrictions and seizure of assets will presumably continue to be employed. For example, in cases where a terrorist organization has a connection to Israel, steps can be taken to seize assets through a purely administrative proceeding under the Defense Regulations. By contrast, in cases in which there is no connection to Israel, judicial proceedings (civil or criminal) must be conducted, and the administrative authority is restricted to a temporary freezing of assets, subject to limitations.

Apparently, the adoption of monitoring and review mechanisms that apply to decisions regarding acts of terrorism with no connection to Israel was not motivated by a concern for the human rights of potential injured parties, but rather by a fear of adopting measures at the domestic level solely on the basis of foreign demands and without subjecting them to independent domestic review. It is advisable to formulate a consistent overall approach to the fight against the financing of terrorism at both the state and the international levels, including comparable conditions for both with regard to the freezing or seizure of assets linked to terrorism. Such consistency is necessary primarily to maintain the balance between effective efforts to combat the financing of terrorism and the duty to preserve the human rights of suspects, defendants, and third parties. In this regard, there is no practical justification for distinguishing between acts of terrorism that have no connection to Israel and those that do. However, rather than adopting a comprehensive perspective, the Financing Law took a patchwork approach. Obviously, the legislative approach that has been adopted reaffirms the previous problematic arrangements regarding terrorist activities linked to Israel, while ignoring the importance of human rights, in general, and the constitutional status of the right to property in Israel, in particular.

Finally, this book demonstrates that the Financing Law, notwithstanding its stated purpose, is far from being a perfect tool for meeting Israel's international obligations to suppress the financing of terrorism. The Law does not pave the way for a straightforward, direct implementation of these undertakings, and international bodies have given Israel only an average score on its compliance with international obligations in this area. In practice, the mechanism provided by the Financing Law to designate organizations or individuals unrelated to Israel as terrorists was utilized for the first time only in late 2008, almost four years after the Law had been adopted.