IDI researcher Karin Tamar Shafferman calls for a reexamination of the relationship between Arabs and Jews in the State of Israel and an exploration of the way Israel's Arabs define themselves, in order to determine whether the equality that Ben-Gurion spoke of upon founding the State has been achieved.

" We appeal... to the Arab inhabitants of the State of Israel to preserve peace and participate in the upbuilding of the State on the basis of full and equal citizenship and due representation in all its provisional and permanent institutions.

—The Declaration of the Establishment of the State of Israel "

In this historic speech, Ben-Gurion declared that the newly-formed State of Israel intends to accept Arab residents within its borders as full-fledged citizens. From that day onwards, Israeli democracy has had to cope with the delicate task of preserving the rights of non-Jewish minorities (some 24% of the population), without compromising Israel's definition as a "Jewish State;"  that is, to contend with the state's dual "Jewish and Democratic" identity. But the Jewish majority is not the only group which is divided between two worlds. Israeli Arabs also have a dual identity – some define themselves as Palestinian, some as Israeli, and some as Israeli Arabs.

Today, on the eve of Israel's sixtieth anniversary, is a time to reexamine the relationship between Arabs and Jews in the State of Israel, to look at the ways in which Israel's Arabs define themselves, and to ask whether the equality of which Ben-Gurion spoke has already been achieved.

In order to achieve a better understanding of the relationship between Jews and Arabs in the State of Israel, as well as Israeli Arabs' complex identity, one must consider the different periods in which they were fashioned:

The Relationship between a Majority and a Minority

According to Smooha, there are six key factors that affect the relationship between the Jews and the Arabs in Israel:

How do Jews and Arabs Evaluate Their Relationship?

Data collected in the Israeli Democracy Index show that the relationship between Jews and Arabs is not good, according to both groups (see figure 1). What is also clear is that Jews are much quicker to rate the relationship as bad than Arabs: in 2000, 83% of Jews said that the relationship between Jews and Arabs is not good, as opposed to 50% of Arabs. After the October Riots of 2000, there was an increase in the rate of those who assessed the relationship as not good (93% of Jews and 76% of Arabs). The numbers stayed quite static for some years, but in the 2007 Democracy Index, only 66% of Arabs evaluated the relationship between Jews and Arabs as less than good. The discrepancy between the percentages of negative raters amongst Jews and Arabs could very well stem from the fact that the Jews perceive the Arabs as disloyal; moreover, since they are mostly unfamiliar with the Arab population, base most of their opinions on the media. The media usually focuses on the negative aspects of Jewish-Arab relations, and usually describes the Arab population in a particularly negative fashion, while the Jewish population is often presented as much more humane and enlightened. This may also stem from stereotypes – 75% of Jews think Arabs have a tendency towards violence, and 55% think Arabs are incapable of achieving the same cultural level that characterizes the Jewish population. 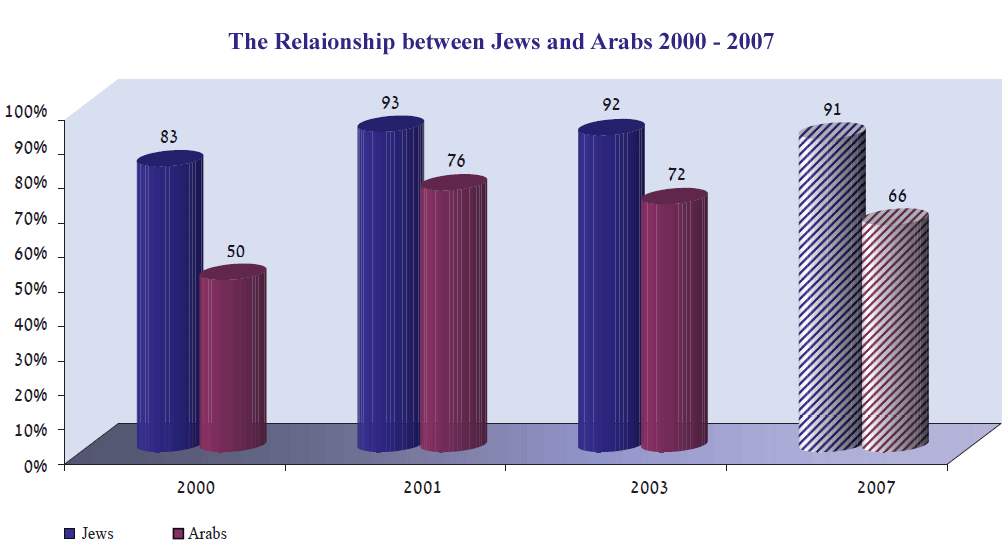 Whereas many more Jews than Arabs are of the opinion that the relations between Arabs and Jews are not good or not good at all, when it comes to the public's view regarding discrimination – the numbers are reversed. Eighty percent of the Arab population agrees that they are discriminated against in comparison to the Jews, as opposed to just 55% of Jews who agree that the Arab population is indeed discriminated against.

As to a process of fully normalizing Arab rights and creating true equality between the groups, 56% showed support (figure 2). This number is an increase from 2003 (when only 47% supported the idea), but still very low compared to the levels of 1999 and 2000 (73% and 65%, respectively). Some 50% of Jews justify the discrimination against Arabs based on Israel's definition as a Jewish and Zionist state.

Figure 2: Support of Equal Rights for Israeli Arabs (among Jews; in percentages)

The data that describes how the Arabs feel about Israeli Democracy is also somewhat paradoxical. On the one hand, one-quarter of them say that they themselves oppose Israeli democracy – 24% say they are opposed to Arab parties joining the government, and 22% say that they oppose equal rights between Jews and Arabs. In other words, nearly one quarter of Israeli Arabs deny the possibility that Israeli Arabs become a part of Israeli democracy. Perhaps this resistance stems from a refusal to recognize Israel as a legitimate political entity, which leads to a refusal of full and equal rights. This position may relate directly to a different position – as long as Israel is perceived as the oppressor of the Palestinians, Israeli Arabs may not want to belong to Israeli society. The opposition to equal rights could also stem from the fear of equal responsibilities, including an obligatory national or military service.

On the other hand, many Arabs complain about the impotency of Israeli democracy. Thirty-one percent claim that freedom of speech is limited, in comparison with other democracies, as opposed to 19% of Jews. Almost one-half of the Arabs polled (46%) said that human rights are not protected as much as in other democracies, as opposed to 34% of Jews. As to their opinion regarding the situation in Israel, 64% of both Arabs and Jews said they definitely want to continue living in Israel, and 74% of Arabs said that they are concerned as to the future of the State of Israel.

One could point out two main components of which Arab Israeli identity is comprised. The first is the civic component, involuntarily stemming from their status as Israeli citizens. The second component is the national one, stemming from their association with the Palestinian national movement and the Arab community. These two aspects of Arab Israeli identity are seen by some as incompatible – i.e. strengthening the national aspect will necessarily weaken the civic one. Others claim that despite the obvious conflict, there is not necessarily a contradiction between the two.

Considering the majority–minority relationship between Jews and Arabs in Israel, and considering the Israeli Arabs complex identity issues, one may ask: will the Jews and the Arabs be able to find common ground?

Figure 3: "In your opinion, how willing are the members of the group to compromise in order to reach an agreement which will allow everyone to live here together?" (Somewhat or Very much; in percentages

The huge discrepancy shows once again that the Jewish population does not have in-depth knowledge of the Arab population and that communication between them is lacking. This lack strengthens stereotypes and perpetuates the fanatic image of Arabs held by many Jews.

The relationship between Jews and Arabs is indeed very complex – the Arabs wish to define their collective identity within the framework of Israeli society, which is Jewish by default, and yet at the same time democratic, allowing the Arab population to struggle for their right to equality.