Widespread dissatisfaction with Israel's leadership and institutions; Most Israelis believe Knesset has legislated undemocratic laws and oppose taking powers of judicial review away from Supreme Court; Israelis distrust the media and rely more on traditional media than social media; Israelis are optimistic in their assessment of the overall situation of the country and its future; Israeli citizens rank high in OECD scale on political involvement.

A few years ago, people spoke about the ‘Facebook democracy’. They said that people were not prepared to get out and protest. Today we are seeing, on the Left and Right, people going out into the streets ready to express their opinions. President Reuven Rivlin

The Index reveals that Israel’s democracy is suffering an ongoing crisis with no imminent signs of a change of trend. Yohanan Plesner, President of the Israel Democracy Institute (IDI)

December 12, 2017 ---- The 2017 Israeli Democracy Index was presented today to President Reuven Rivlin by Israel Democracy Institute (IDI) President Yohanan Plesner. The Democracy Index project, now in its 15th year, is conducted by the research team from the Guttman Center for Public Opinion and Policy Research at IDI, headed by Prof. Tamar Hermann. 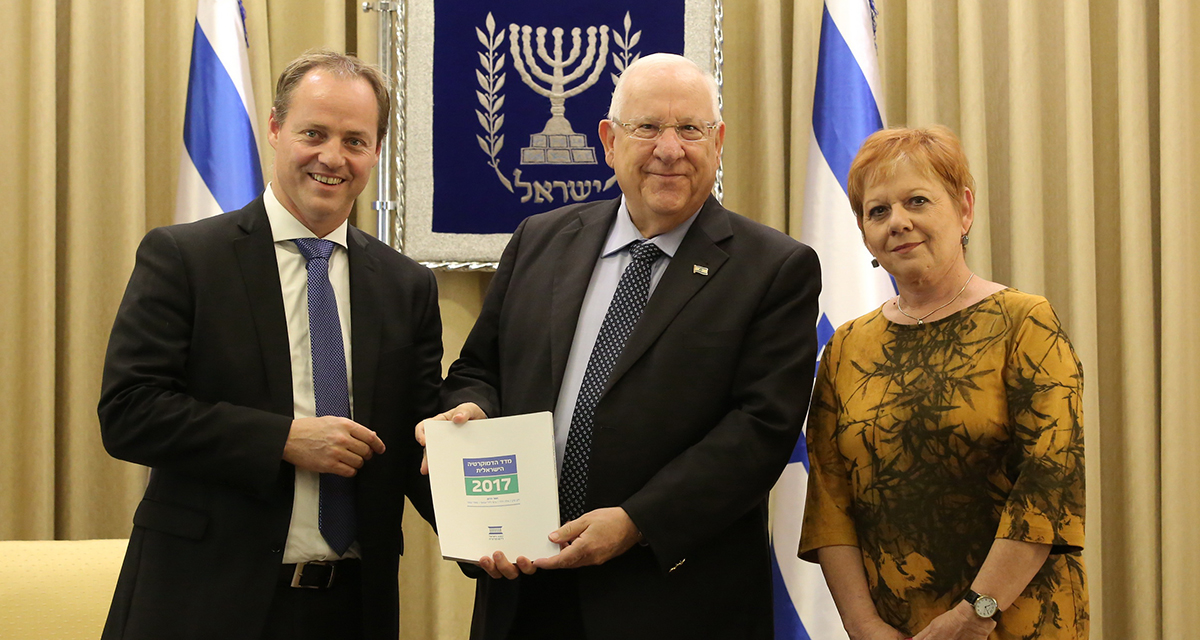 President Reuven Rivlin: “A few years ago, people spoke about the ‘Facebook democracy’. They said that people were not prepared to get out and protest, that instead they sit at home and disapprove. Today we are seeing, on the Left and Right, people going out into the streets ready to express their opinions.

In approaching to the Democracy Index, we have two possibilities. The first is the approach taken by the Israel Democracy Institute, which for many years has been monitoring the state of democracy in Israel, analyzing opinions, questionnaires, surveys and opinions. But it is also possible to measure the power of democracy in a different way. To take a chance. To shake the democracy. To test its basic institutions in order to check whether they are indeed as stable as needed, or whether they risk collapse. The risk entailed in the second type of test is great. If the experiment should reveal that democracy was indeed shaky, that it had been badly damaged as a result of such movement, it would be difficult to repair.”

Yohanan Plesner, President of the Israel Democracy Institute (IDI): “the Index reveals that Israel’s democracy is suffering an ongoing crisis with no imminent signs of a change of trend. As in the past, this year’s findings point to fundamental and profound disagreements among the major groups in Israeli society, such as the definition and identity of the State, as well as the collective understanding of the “common good”. Israeli society is rift with fundamental differences of opinion, not only between Arabs and Jews and not only within tensions of the political-security domain. Within the Jewish Israeli public, deep and ongoing disagreements exist regarding the proper balance between Jewish and democratic values of the State. In this context, and in light of a series of constitutional changes proposed by government members, such as the Nation-state Bill, the current leadership is tasked with the heavy responsibility of fostering respectful, responsible and non-partisan discourse - the kind of discourse that highlights our strengths. Precisely when public trust in state institutions is so low – such discourse is the minimum expected.”

Is Israeli democracy in danger? Some 45% believe that Israel's democratic system of government is in serious danger, though this is not consensus across all sectors. A minority (23%) among Jewish right-wing and religious voters agree with this statement, while most Jewish left-wing voters (72%) and Arab-Israelis (65%) hold this belief. A minority of the entire sample (41.5%) believe that Israel used to be more democratic than it is today. Among the older age group (over 55), about half think so, among the younger generation, about one-third. There is consensus (75%) among the general public that it is incorrect to state that a democratic regime is not suited to Israel because of its special security and social problems.

The Democracy Index for 2017 reflects that distinct populations in Israeli society continue to exist, each of which has a different understanding of the essence of democracy. The analysis also shows a large gap between one's personal and general satisfaction with Israel's situation on the one hand, and on the other hand, widespread dissatisfaction with the functioning of both Israel's leadership and institutions. This gap may damage, and has perhaps already damaged, the public's level of commitment to the democratic system of government. Prof. Tamar Hermann, Director of the Guttman Center at IDI

Religion and the Nation State - In response to an open question, about half of Jewish Israeli respondents (47%) agreed that the Jewish aspect of the state's character is national, while 30% regarded the Jewish character as primarily an expression of religious meaning. Among Arab citizens of Israel, 29% believe the Jewish character of the state is inherently racist, and 26% said the definition of the state as Jewish reflects sole Jewish ownership over the state. When breaking down the respondents, 42% of Jewish Israelis, 74% of Arab Israelis, 75% of the Jewish Left, and 61% of Jewish secular citizens, believe the Jewish component of the character of the state is too strong. Some 53% of all Jewish respondents, (79% of secular Jews, 15% of Haredi, 16% of religious Jews) agreed with the statement that "the religious population is gradually taking control of the state." When asking the Arab respondents whether religious factions within the Arab-Israeli public were taking control, more than one-third (37%) of Arab respondents agreed with this statement.

Politicians and society - the general public is dissatisfied with the political system and its elected officials. Some 64% of the general public believes the government does not deal well with the country’s central problems. This perception of the government's low performance cannot be attributed to the belief that the opposition has performed successfully, as 67% of all respondents and 81% of respondents who voted for opposition parties, believe that the opposition is weak and does not properly fulfill its function. In addition:

State institutions - As a rule, the levels of trust among the general public in its state institutions are very low, including in the state’s main democratic institutions: the Knesset, the government and the political parties. The level of trust in the government is only 29%, in the Knesset 26% and in the political parties 15%. Other institutions with low levels of trust are the media (28%) and the Chief Rabbinate (20%). Trust in the Supreme Court is identical to last year (56%) and public trust in the President rose to 65% (up from 61% last year). Ranking first is the IDF, with public trust levels at 81% (88% of Jewish Israelis).

Fake News? - The general public maintains low levels of trust in the media. Only a minority of the general public (31%) rely more on social media than on traditional media, print or broadcast. Some 53% report that television news programs are still their primary source of political information, followed by print (28%) and radio (26%), with only 26% reporting social media as their main source of political information.

Most Israelis (56%) believe the media describes the situation in Israel as worse than it really is. However, despite attacks on journalists and the media in the past year, 74% of Israelis oppose any law that would allow the closure of a media outlet in the event that it criticizes government policy. Moreover, the majority of the general public (66.5%) does not agree with the statement that since the government funds the public broadcasting authority it should be allowed to influence its content.

Israel and the World – The Index's chapter on international comparisons has Israel placed relatively well when compared to all the other countries in the world, but Israel ranks low in the index when compared with OECD countries, a comparison done for the first time this year. Thus, Israel ranks at the bottom of the scale of OECD countries on issues of human rights and liberal characteristics, but is ranked high in terms of indicators related to the political involvement of its citizens. In indices related to the functioning of government systems, Israel is slightly below the middle in comparison to the OECD countries.

Despite high levels of distrust and other problems, the general public continued to positively assess the country’s general situation: 48% think the situation is good (versus 36.5% from last year). The majority (73.5%) describes their personal situation as good and believes that Israel is a good place to live (84%). Although the sentiment of Arab-Israeli citizens is less positive in most areas in comparison to Israeli-Jewish citizens, both segments of society reflect this positive viewpoint.

Some 68% of Israelis are optimistic about the future of the country, and 81% would not want to emigrate to another country even if they were given full citizenship there. This is despite 46.5% of Israelis believing that life in Israel is more difficult than in other Western countries.

The study was conducted on the basis of a large-scale public opinion survey conducted between May 9-29, 2017, by Rafi Smith (in Hebrew) and Statenet (Arabic) research institutes. The survey included 1,024 interviewees (864 Jews and others, and 160 Arabs) who constitute a representative sample of the adult Israeli population.