Dr. Tehilla Shwartz Altshuler argues that the main reason the coup in Turkey fizzled is not because of Erdogan’s FaceTime message, but because he had been anticipating this putsch for quite a few years and had arranged the entire legal apparatus that governs the relationship between the Turkish government and the media accordingly. 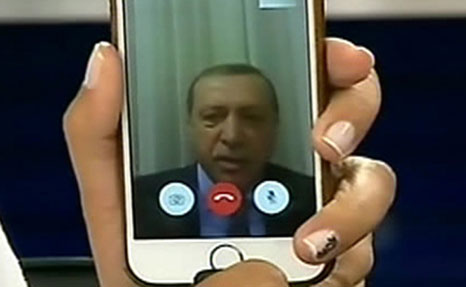 Ever since Turkish President Recep Tayyip Erdogan took to Facetime to address the ongoing military coup, the media has been swarming with reports about his successful use of social media. However, for all the enthusiasm about the “revolution broadcasts” that went out all over the world in real time via Facebook’s Facebook Live app and Twitter’s Periscope app, we should be cautious in our celebration.

Turkey has been leading the race to the bottom of Freedom House’s Freedom of the Press Index in recent years; it is the only country interested in joining the European Union that is listed in the index as “not free.”

By way of comparison, Israel ranks 101 and it only gets worse from here.

What is truly amazing is that this decline in freedom of the press being experienced in Turkey is actually taking place slowly, steadily and legally – via legislation and court rulings. Anyone who has read Freedom House’s reports over the past three years has noticed a consistent process of legislative amendments that gives the investigative authorities and courts power to issue injunctions against media outlets suspected of belonging to a terrorist group, to shut down websites and to turn slanderous statements into serious criminal offenses. Even as this is being done, financial pressure is being applied to newspapers and close associates of Erdogan are being pressured to buy media outlets.

And let’s not forget to mention the imprisonments, threats and physical attacks against journalists.

We would also do well to recall that Erdogan’s administration blocked Twitter, YouTube and Facebook in April 2015 when the companies refused to take down a clip of a terrorist attack in which a government prosecutor was murdered. These outlets were only allowed to resume operations after they had removed the clip, thereby obeying a court order. Anyone searching for the clip on YouTube saw a message that the results could not be obtained due to an administrative order.

This was not the first time that social networks had gone dark in Turkey. Twitter accounts critical of the government have been blocked since 2014. The Turkish parliament passed laws in early 2015 strengthening government control over the Internet and allowing it to block websites.

While the Constitutional Court struck the laws down, parliament surprisingly passed them again in 2015.

The main reason that the coup fizzled is not because of Erdogan’s Facetime message, but because he had been anticipating this putsch for quite a few years and had arranged the entire legal apparatus that governs the relationship between the Turkish government and the media accordingly.

Throughout the dramatic night, the use of the Facebook Live Map application, which shows where people are using Facebook Live at any given moment, allowed anyone who wished to know what was happening to go to a single place where all the information was concentrated instead of searching for it all over Facebook.

Still, the simple fact that even if Erdogan broadcast from his hiding place over Facetime, which is installed on every Apple device, the broadcast was still carried – how could it not be? – on traditional television. It might be said that one of the failures of the coup’s planners was that they relied too much on the social networks and did not think to block the television broadcasts.

Alternatively, it might be said that Erdogan’s control over the television stations was so complete that the social networks simply could not overcome it, as much as they had hoped to.

Hence, rejoicing over the role of social networks is premature.