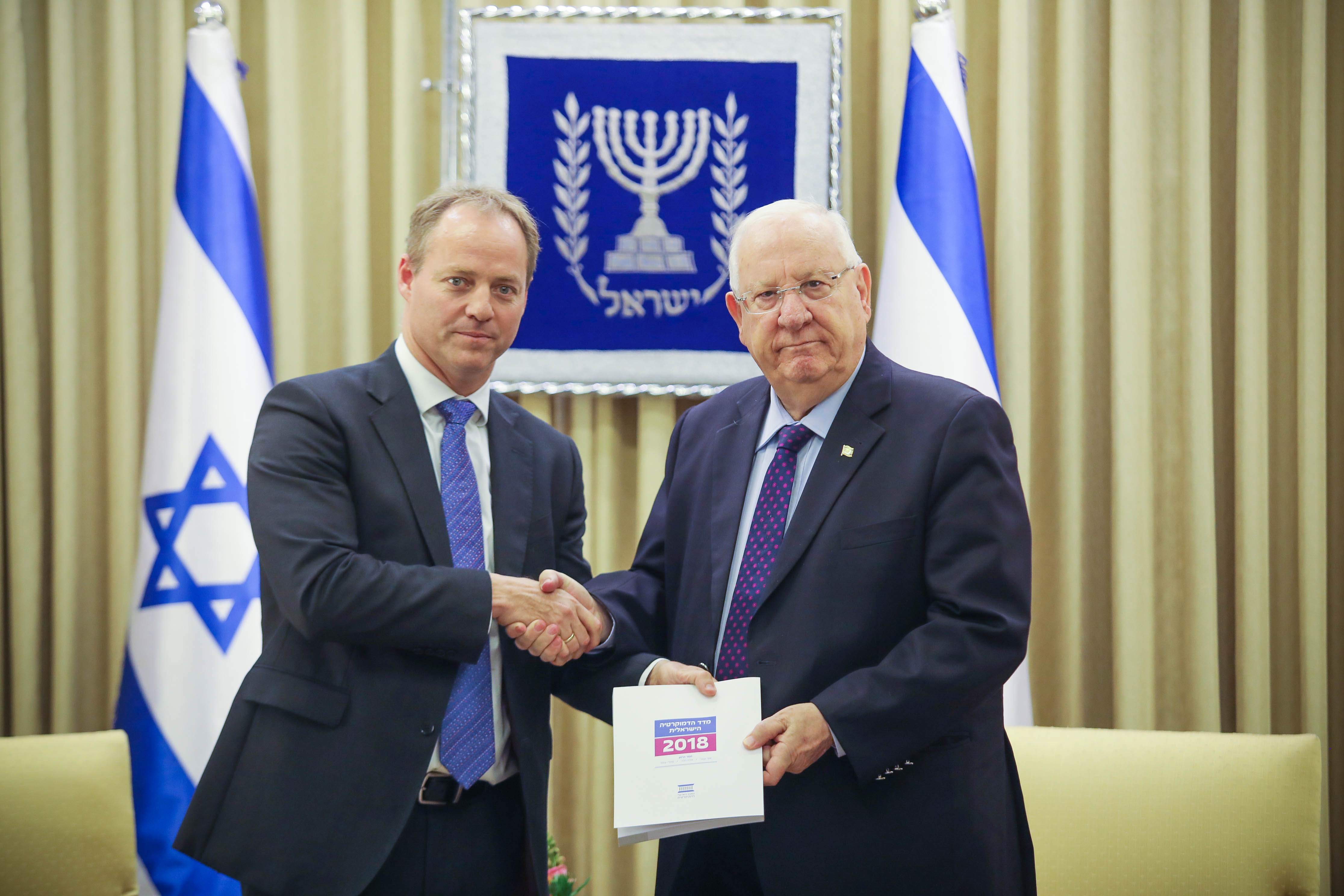 Chair of the Board of Governors of the Israel Democracy Institute, Amir Elstein;

Each year I take pride in presenting you, President Rivlin, with the annual Israeli Democracy Index, this time for 2018.

I believe that the Index is one of the most important tools for defending Israeli democracy, and indeed, offers a roadmap for strengthening democracy in Israel. Thus, it is only natural that the Index is first made public here at the President’s Residence, since we see you as a true partner in this undertaking.

It is a great pleasure for all of us to be here with you on the first day of Hanukkah, a festival that marks the victory of spirit over matter; a victory of the few, who were convinced of the justice of their cause, over the many.

This has also been the key to the success of Zionism—spearheaded by a small group who were able to change the course of the history of the Jewish people thanks to their practical vision and to their enormous commitment to its realization.

Today, we must still ask ourselves: What is the spirit that guides us? What shared vision can bind us?

I have a clear answer to this question.

Israel’s Declaration of Independence should serve as our spiritual and ethical compass, along with an uncompromising commitment to integrity and to the broader public interest, which must always come before personal and private interests.

Even while it is critical that every person should be considered innocent until proven otherwise, attacks launched by those under suspicion that seek to delegitimize the rule of law, of law enforcement authorities, the police, and the courts, are entirely incompatible with protecting our democracy and with a commitment to the democratic values that we share and make our existence possible here.

Mr. President, the Democracy Index shows that Israel’s citizens are proud to be Israeli, and that much of the public believes that the country’s overall situation is good or excellent. These are certainly reasons for optimism.

We are currently in the midst of a storm, the source of which—not for the first time—is to be found in the tension between the our country’s political and professional leadership.

The Democracy Index examines public trust in state institutions and has shown, year after year, that the public places much greater faith in non-partisan professional institutions (the most notable being the high level of confidence in the IDF) than in political institutions, such as the Knesset and political parties.

The lesson here is not that we need to transfer power from elected representatives to the professional cadres, but that we need to keep in mind the tremendous importance of the role of responsible and experienced professionals in providing oversight and balance, and in exercising restraint.

Elected leaders have an important lesson to learn from this Index: decisions that undergo judicial review, and assessed by professional committees appointed by law or by government decision—these are the best decisions, and they enjoy the most public legitimacy and have the greatest authority.

The approach that says, well, if I don’t like the committee’s decisions, I’ll simply disband it; or-- if I don’t agree with the court’s ruling, then I’ll just reduce judicial powers—this is an entirely unacceptable and illegitimate practice, and we must wean ourselves away from it.

The best way to strengthen public trust in our elected officials and state institutions is to adopt a non-partisan, professional approach that seeks to promote the common good.

As for Israel’s performance regarding government functioning, the rule of law and the struggle against corruption, the Democracy Index shows that we are in a fairly good position relative to the entire international community, but rank low relative to other OECD countries—which I believe, is the truly relevant comparison group for the State of Israel.

The time has come, then, for us to demand more of ourselves. We know what can be done to improve Israel’s standing on these indicators. The government has various proposals for reform, and at the Israel Democracy Institute we have also put forth practical plans in a range of fields. Now is the time for action.

Several years ago, you warned that Israeli society is in a process of change of character. This Index shows that this is no longer just a matter of demographics.

Our central mission—and we see you as a partner in this—is to strengthen Israel’s democratic core in the spirit of the Declaration of Independence.

We must once again unite around a shared ethical and value-based vision.

Thank you very much.