This year's public opinion poll, a project conducted by the Guttman Center for Surveys, found that Israeli's are more content than the news reports might make them appear.

Since 2003, an extensive survey has been conducted annually. Each survey presents an estimate of the quality of Israeli democracy for that year. Data for the Israeli Democracy Index 2015 were collected during April and May 2015. The study population was a representative national sample of 1,019 adults aged 18 and over. The maximum sampling error for sample of this size is +/- 3.2%.

When broken down by nationality, 76.5% of Jews categorize their situation as positive, as do 65.1% of Arab respondents. When asked if they would want to emigrate from Israel if they could obtain citizenship in the United States or another Western country, a very large majority of respondents—84.3% of Jews and 83.4% of Arabs—indicated that they wish to remain in Israel. 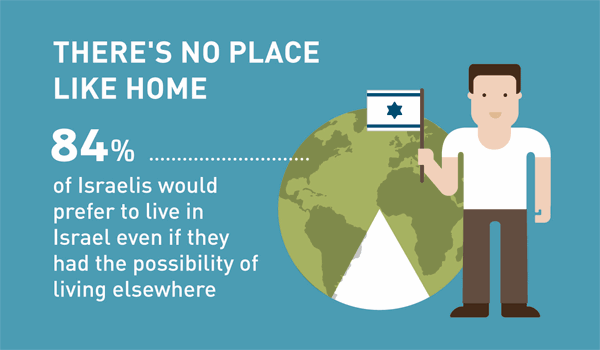 Trust in Government and Institutions

Differing views – In several areas, a great disparity was found between  evels of confidence in institutions among Jews and Arabs:

The Status of the Supreme Court

Approximately two thirds of Jews in Israel (62.2%) express a high level of trust in the Supreme Court, which enjoys more public confidence than the police (42.2%), the government (37.5%), the Knesset (33.8%), and Israel’s political parties (15.1%). Trust in the Supreme Court is higher among the left (83.6%) than the right (50.1%), and is especially low among ultra-Orthodox and Orthodox Jews. Similar percentages of Jews and Arabs have trust in the Court (62.2% and 63% respectively).

The majority of the public (56.0%) is opposed to changing the current system, in which the Supreme Court can overturn laws passed by the  Knesset. Opposition to stripping the Supreme Court of the authority to overrule the Knesset is greater among Arabs (63.8%) and lower among Jews who identify themselves as politically right-wing (43.4%). 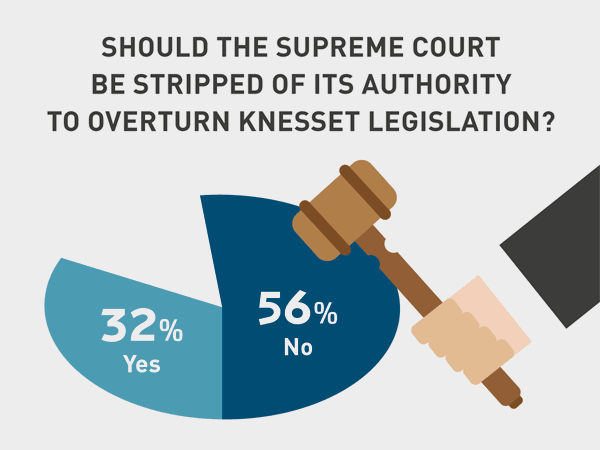 A majority of the Israeli public support freedom of expression, and specifically the right of citizens to criticize the state. When respondents were asked whether Israelis should be legally prohibited from expressing harsh criticism of the state in public, 70.4% of the total sample (69.2% of Jews and 76.2% of Arabs) expressed opposition to this notion. This opposition crosses all political lines, though it is more pronounced on the left than in the center or the right of the political map. When asked whether they agree that in order to protect national security, the state should be permitted to monitor what citizens post on the Internet, 59.1% of the Jewish public supported such intrusions on ndividual freedom of expression. A majority of Arabs (53.8%), in contrast, oppose granting the state permission for such surveillance. Surprisingly, younger Jewish respondents are more strongly in favor of such monitoring than older ones.

Attitude toward the “Other”

Jews and Arabs differed considerably on the neighbors they would find least desirable. When asked if it would bother them to live next to eight groups of “others,” Jewish respondents indicated that they would be most troubled by the prospects of living next to foreign workers (48.5%), an Arab family (36.1%), and people with mental health disorders (31.5%). 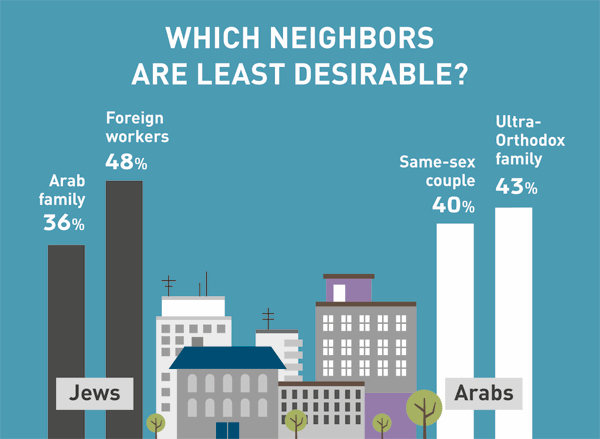 The attitudes of Israeli Jews toward Israel’s Arab minority are complex. On the one the hand, 54.1% of Jewish respondents acknowledge that there is discrimination against Arabs. An equal share oppose allocating greater funding to Jewish localities than to Arab localities. Most Jews are also not opposed to being treated by an Arab doctor (77.8%) or to having Arab teachers in Jewish schools (74.4%).

At the same time, only a small percentage of Jewish respondents are prepared to involve Arabs in crucial state decisions: 73.6% of Jewish respondents would require a Jewish majority for decisions regarding peace and national security, while 53.6% would require a Jewish majority for matters of governance, society, and the economy. In addition, 56.6% of Jews are opposed to including Arab parties and ministers in the government, 55.7% believe that it is not possible to identify as a Palestinian and be a loyal citizen of Israel, 42.3% think that Israel’s Arab citizens support the destruction of the state, and 39% think Arab citizens are a security threat. 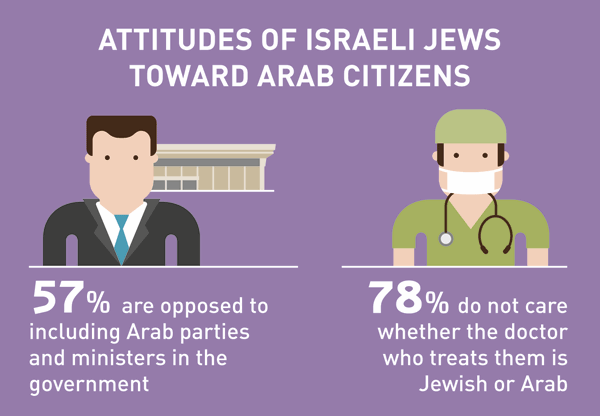 A majority of the Jewish public (71.3%) are opposed to granting Jews greater rights than non-Jewish citizens. However, a majority of Jews (60.8%) favor making the right to vote for and be elected to the Knesset contingent upon the signing of a declaration of loyalty to Israel as a Jewish state and upon service in the IDF or a civilian alternative.

More than any other aspect of Jewish-Arab relations surveyed, the idea of marriages between Jews and Arabs elicited extremely strong opposition from both Jewish and Arab respondents. A considerable percentage of respondents in both sectors—36.8% of the Jews surveyed and 38.8% of the Arabs support the activities of organizations that use forceful and even illegal means in order to prevent such unions. 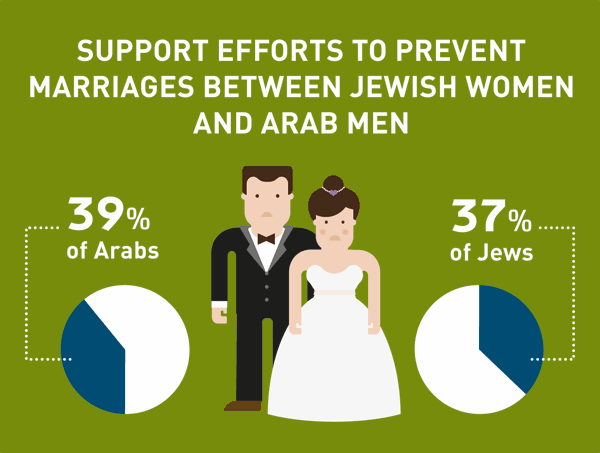 The Nature of the State 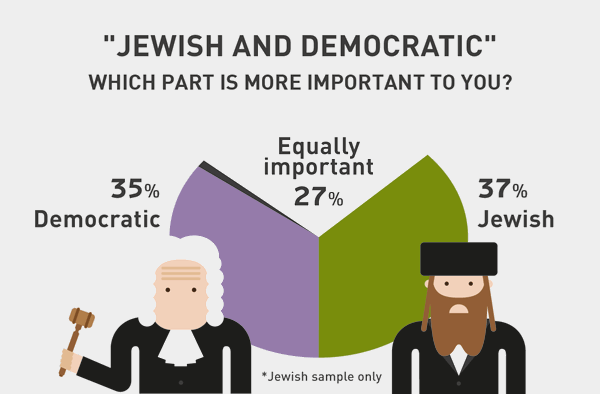 In 2015, Israel is once again ranked at the midpoint or higher in most of the democracy indicators studied. Israel stands out favorably in measures of life satisfaction and political participation, but the areas of civil liberties and social policies have room for improvement.

Average marks – Of 28 countries, Israel ranked at or near the middle of the scale when it comes to a combined indicator of political rights andm civil liberties (14th place), freedom of the press (13th place), functioning of government (tied for slots 10–15), and perceptions of corruption (tied for slots 11 and 12).