Yohanan Plesner, President of the Israel Democracy Institute and Prof. Eugene Kandel, CEO Start-Up Nation Central, open the two day conference, welcoming senior executives from the public and private sectors. They've come together to work on a long-term vision for Israel’s economy and for addressing the market’s core issues. 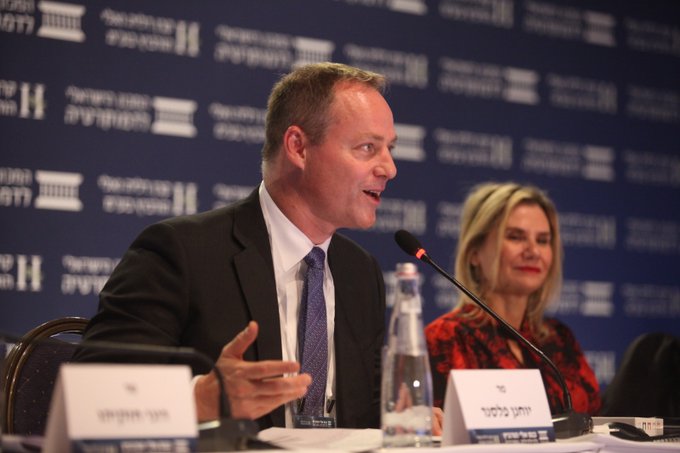 Shaul Meridor, Director of Budgets, Ministry of Finance: “In order to maintain the current situation along with Israel’s GDP the maximum deficit limit should have been 2.5%. The deficit goal was 2.9% but in practice, we will end the year with a much higher deficit."

Meridor added: “There is no chance that we will be able to close the gap in building new roads....The education system mismanages its budgets”

Prof. Avi Simhon, Head of the National Economic Council and the Prime Minister’s Advisor on Economic Affairs: “The business sector needs computer engineers; talented people want to study computer science, but universities cannot make room for them. Our job is to open that bottleneck.”

Roni Hizkiyahu, Accountant General, Ministry of Finance: “this year, I expect a deficit of 3.7% and I estimate that the debt-to-GDP ratio will not rise, and perhaps even decline. We should see this as good news.”

Yohanan Plesner, President of the Israel Democracy Institute: “Even in this period of political deadlock, Israel’s economy is viewed as an island of stability. Nevertheless, when we take a closer look we see troubling trends.”

Anat Guetta, Chair- Israel Securities Authority: "The Israeli market is detached from the success of high-tech and is no longer a relevant option for developing small and medium companies – this has a detrimental effect on Israel’s economy.”

Yohanan Plesner, President, Israel Democracy Institute: “Even in this period of political deadlock, Israel’s economy is viewed as an island of stability. Israel’s macro-economic stability is impressive. In the past decade, the economy grew at double the rate of OECD countries. The unemployment rate is at an historic low – 3.4%. The ratio of the debt/GDP is low in international comparisons and, investing in the Israeli Shekel turned out to be one of the best investments in the past decade. In short – the Israeli economy has never been better. Nevertheless when we take a closer look, we see troubling trends. We have to identify and acknowledge future challenges and offer new directions and new solutions, to ensure that the economy will continue to thrive in the future.”

Prof. Avi Simhon, Head of the National Economic Council and the PM’s Advisor on Economic Affairs: "The government is united in its commitment to invest in infrastructure – I think we are on the right path. Public transportation is a huge problem.” Simhon added: “the amount of capital per employee in Israel is very low. Talking about productivity is a basic necessity." In conclusion, he said, "The universities are a bottleneck - students want to study computer science, and the universities are unable to accept them."

Shaul Meridor, Director of Budgets, Ministry of Finance: “The responsible fiscal policy of recent years along with many other steps that have been taken have contributed to relatively high growth. Our plan for a maximum debt was 2.9%, but in fact it will be much higher…

We need to take steps to converge to a reasonable level that will enable growth over time without adding to our national debt. However, responsible fiscal policy is not enough; rather-- we must focus on what we view as most important - for example, infrastructure and transportation. We are seeing a significant increase in the number of vehicles on the roads. There is no way in the world that Israel can close the gap by just building roads. Today, we see are already seeing very heavy traffic, but this is just a promo for what we can expect to see in the not too distant future."

Meridor presented a slide on budget data for a student in Israel saying: "I do not want to get into an argument about whether or not there is enough money. What is certain – is that the budget is mismanaged. The money which was invested, did not in any way improve students’ achievements."

Roni Hizkiyahu, Accountant General, Ministry of Finance: "Overall, this year, I expect a deficit of 3.7% and I believe that the debt-to-GDP ratio will not rise, and perhaps even decline. We should relate to this positively. There next government will have an opportunity to take significant steps in the areas of infrastructure, especially in public transportation, and in reducing the regulatory burden. There is still l plenty to do, and we must also deal with the challenges the in the area of employment. This is our opportunity to do what needs to be done: to create a situation in which the government can increase growth to over 3% in the coming years, because one thing is clear: we cannot reduce spending. We are a young country that needs to continue to invest in all the various types of infrastructure."

Anat Guetta, Chairman of the Securities and Exchange Commission: "Our market is detached from the success of high-tech. The Israeli capital market is not yet a relevant address for the development of SMEs. Most successful startups opt for other means of funding and this has negative effects on the Israeli economy. This paradox of the market removed and isolated from the startup ecosystem is what I call metaphorically the gap in the Gini index of the startup nation. While the nation is booming, and that is something to be proud of – still, most citizens of the country do not benefit from the boom."