Prof. Karnit Flug, Vice President of IDI and Former Governor of the Bank of Israel spoke at the 2019 Eli Hurvitz Conference on Economy and Society: “With no government in place, the ability to make economy-related decisions is impaired. In the current situation, what is done depends entirely on what the Knesset Finance Committee is prepared to do." 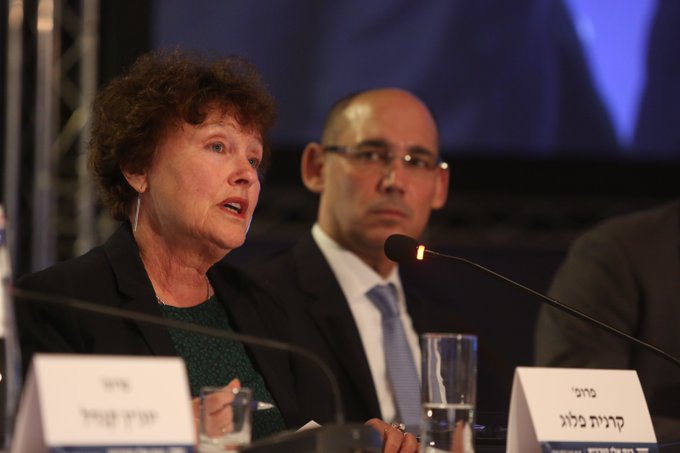 Dr. Ami Applebaum, Chair of the Israel Innovation Authority: "Israel is 5th place in the world in innovation - but if everything is so good, why are we in the 21st place in GDP per capita?"

Shraga Brosh, Chairman of the Directorate of Business Organizations: "Most ministers make decisions taking into consideration the cost of living. In reality, the government itself is the root cause of the high cost of living – but is not willing to admit it.”

Michael Eisenberg, Joint Managing Partner, Aleph Venture Capital: "The Israeli economy depends on the private sector. Israel is entering a period with very little wiggle room and uncertainty because there is no strategic plan and no reserves."

Dr. Ami Applebaum, Chair of the Israel Innovation Authority: “We are ranked fifth in innovation, so why do we rank only twenty-first in GDP per capita? Why are we stuck in exhausting traffic jams? Think how much productivity and capital is wasted while we are stuck in traffic instead of travelling in efficient public transportation. Appelbaum continued: “We have to find ways to connect Israeli hi-tech and rest of the country's industry. There are many opportunities. One of our major major failures is revealed when a company wants to develop a product---the regulator does not help. Israeli companies choose to test their technologies overseas. We want the developers to stay here in Israel – and this is a huge challenge.”

Prof. Karnit Flug, Vice President of the Israel Democracy Institute and former Governor of the Bank of Israel: “With no government in place, the ability to make economy-related decisions is impaired. In the current situation, what is done depends entirely on what the Knesset Finance Committee is prepared to do."

A State budget that takes population growth into consideration; the autopilot that takes into account allowances stipulated by the law, payroll agreements, etc.… All these would require an increase of something like NIS 20 billion - and that money does not exist. Therefore, in reality—our work will not be based on priorities; there will be drastic cuts in budgets or projects will be eliminated entirely. Examples of projects that could be harmed are encouraging doctors to move to peripheral areas of the country, informal education and new investment in infrastructure.

The overall picture reveals that there is progress in creating the infrastructure needed for strategic planning, but as for implementation-- we must strive for much more. The inherent tension between an elected government and the promotion of short-term priorities intensifies when there is short-term governments and political instability. I think that the most important factor in helping promote the implementation of strategic plans over time is a stable professional echelon that will ensure that decisions are made on the basis of what is best for the long-term."

Shraga Brosh, Chairman of the Directorate of Business Organizations: "Over the last few years, growth has disappeared from the public debate, and in its place-- the issue of the cost of living has come to the fore. Few people know that most ministers make decisions based on considerations related to the cost of living. When you eliminate the cement industry, you can bring cement from elsewhere at dumping prices. When you bring iron from Turkey, you can l bring construction costs down - and the government is not willing to admit that the main factor behind the rising cost of living is the government itself... From a carton of milk to the cost of apartments. If we really want to address the cost of living issue, a strategic plan must be put into place on how to bring it down. But allowing the import of cheese from Poland where the VAT there on food products stands at 7% and not 17%-- is not the solution.”

Brosh added, "A few years ago, the Director General in the Prime Minister’s Office, stated that the government would reduce regulation. I am not saying that nothing has been done, but whenever coming up against a difficulty—the issue is abandoned. There is no government in place to formulate a strategic plan to do away with unnecessary regulation, and enforce it. Without a strategic plan coupled with h the determination to implement it, there will be no change in regulation."

Heliodoro Temprano Arroyo, Advisor, Directorate General for Economic and Financial Affairs, European Commission said: "Overall, the EU and Israel are close partners, with shared values, culture, history, and many joint economic projects. The potential for strengthening this relationship lies in greater liberalization of the service sector and further expansion of our regulatory frameworks. We hope Israel will take the necessary steps in the political arena, and that the next government will make this happen."

Michael Eisenberg, Joint Managing Partner, Aleph Venture Capital: "The Israeli economy depends on the private sector. Israel is entering a period with very little wiggle room and uncertainty because there is no strategic plan and no reserves."