The Democracy Index project, now in its 17th year, is based on an annual survey of public opinion, taking the public pulse of the country on issues such as the state and resilience of Israeli democracy, the trust in government institutions, feelings about the Jewish and democratic character of the state, and Israel’s standing in comparison to other democracies. This year the survey includes two expanded sections focusing on Israelis attitudes towards the IDF and their attitudes towards Diaspora Jewry.

President Reuven Rivlin: "For a year now, a transition government has been in place in Israel. For a year now, the security, economic, social and diplomatic challenges that lie before us are not receiving the attention they would deserve from a stable government. One does not need to be an expert to understand that we are spiraling out of control. The situation we find ourselves in is problematic, and even dangerous. It is dangerous because the trust that the public holds in the institutions of democracy: in elections, in political parties and in the Knesset – has been eroded.

Even more troubling, the political stalemate, this debacle, is eroding our nation's faith in our ability to work together and live together.

When the nation witnesses its leaders spewing hatred at one another, boycotting entire communities and seeking votes via a strategy of divisiveness, what is left for them to believe in?

The report you have presented to me, here in the President's House – the people's house – features one clear finding: the vast majority of Israelis – Jews, Arabs, secular, religious and Haredi, those who vote right, left and center – all want to live here in Israel.

I am hopeful that 2020 will be a year of unity and partnership – among all the sectors in Israeli society, without any exceptions."

Yohanan Plesner: “While the past year was characterized by an ongoing onslaught on the professionalism and integrity of civil servants and the institutions of law and order, these assaults had very little effect on the public's positions. As we can see in the Index, the public's trust in the Supreme Court is still four times higher than it is in the political parties. Politicians who hasten to attack law enforcement institutions in the name of 'the people' would be well advised to think twice before doing so.”

Prof. Tamar Hermann: “This year’s Index reflects a deteriorated rate in Israeli citizen’s satisfaction with the State’s functionality, in particular the political system to the point that it is perceived as damaging Israeli democracy’s resilience. In each category we found that association with a political side was indicative of peoples answers – so that when someone from the Right-wing was satisfied then someone on the Left-wing was dissatisfied and visa-versa. Nevertheless, Israelis do not prefer moving elsewhere and registered high levels of a sense of belonging to the Israeli collective as well as deep interest in the affairs of the State.”

Trust in State Institutions: The IDF remains the most trusted Israeli institution by 90% of Jewish Israelis, followed by the Office of the President (71%) and the Supreme Court (55%). Less than half of Jewish Israelis trust the police (44%) and the media (36%). At the bottom of the list, we find low levels of trust in the government and Knesset (30% each) and political parties (14%).

Last month, the Israeli Voice Index of the Guttman Center of the Israel Democracy Institute also tested public trust in the Attorney General's Office: 46.5% of Jewish Israelis said they trust Avichai Mandelblit, and a similar percentage (42%) – the State Prosecution. 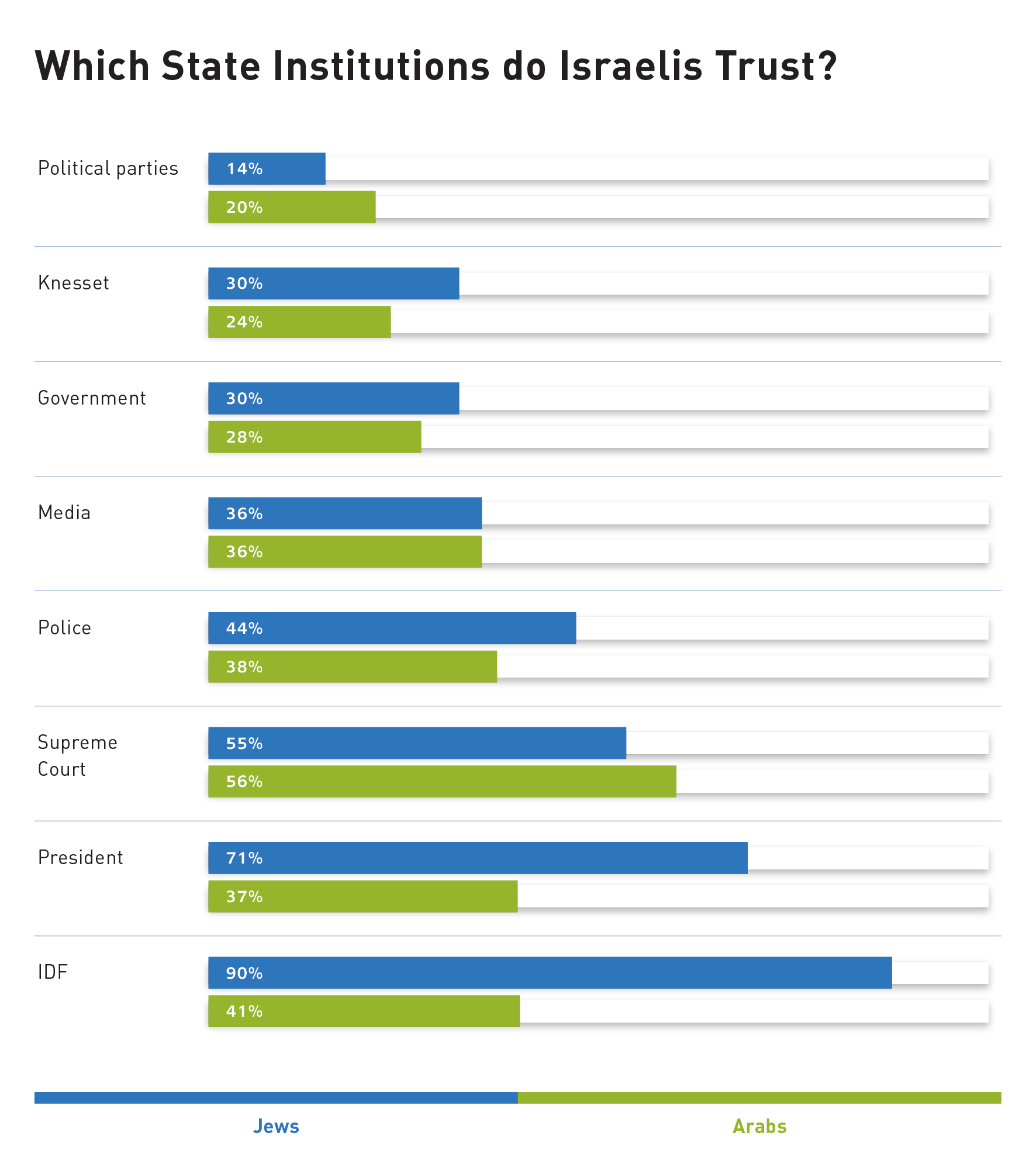 Israel in the eyes of its citizens: Similar to in previous years, the general public’s assessment (Jews and Arabs) of Israel’s overall situation continues to be positive: 50% believe that the overall situation is good or very good (down 3% from last year); 34% think that Israeli democracy is good or very good, as compared with 35% who rate it as either bad or very bad. Among Jewish Israelis we see signifying differences in the responses, when broken down by political self-identification. Those who identify as Right-Wing view both the overall situation and the state of Israeli democracy more positively. 68% of the Right-wing, 42% of the center and 24% of the Left-wing think that the situation is good or very good. Additionally 84% of Jewish and Arab Israelis would choose to live in Israel even if offered US or Western European citizenship. 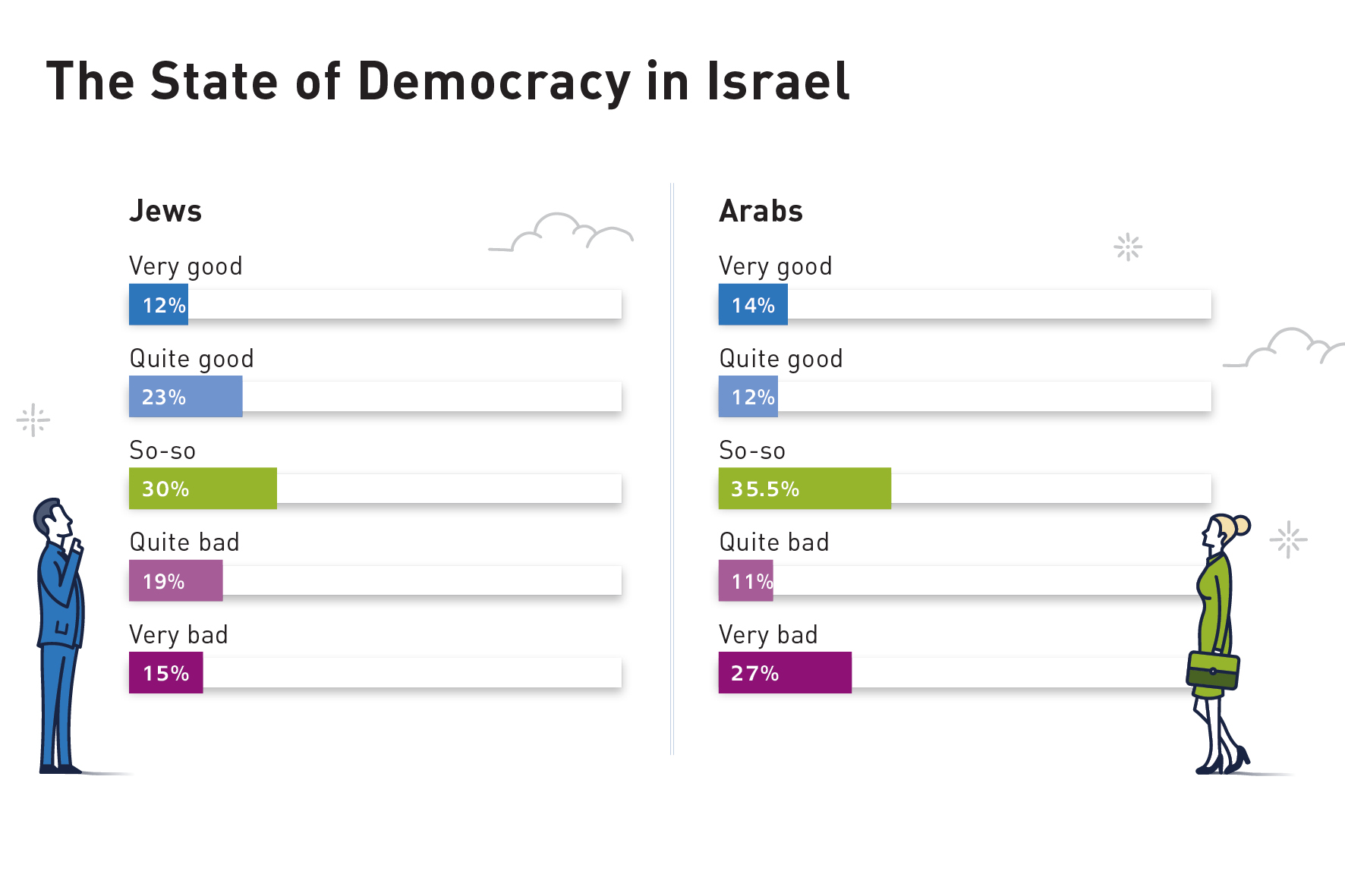 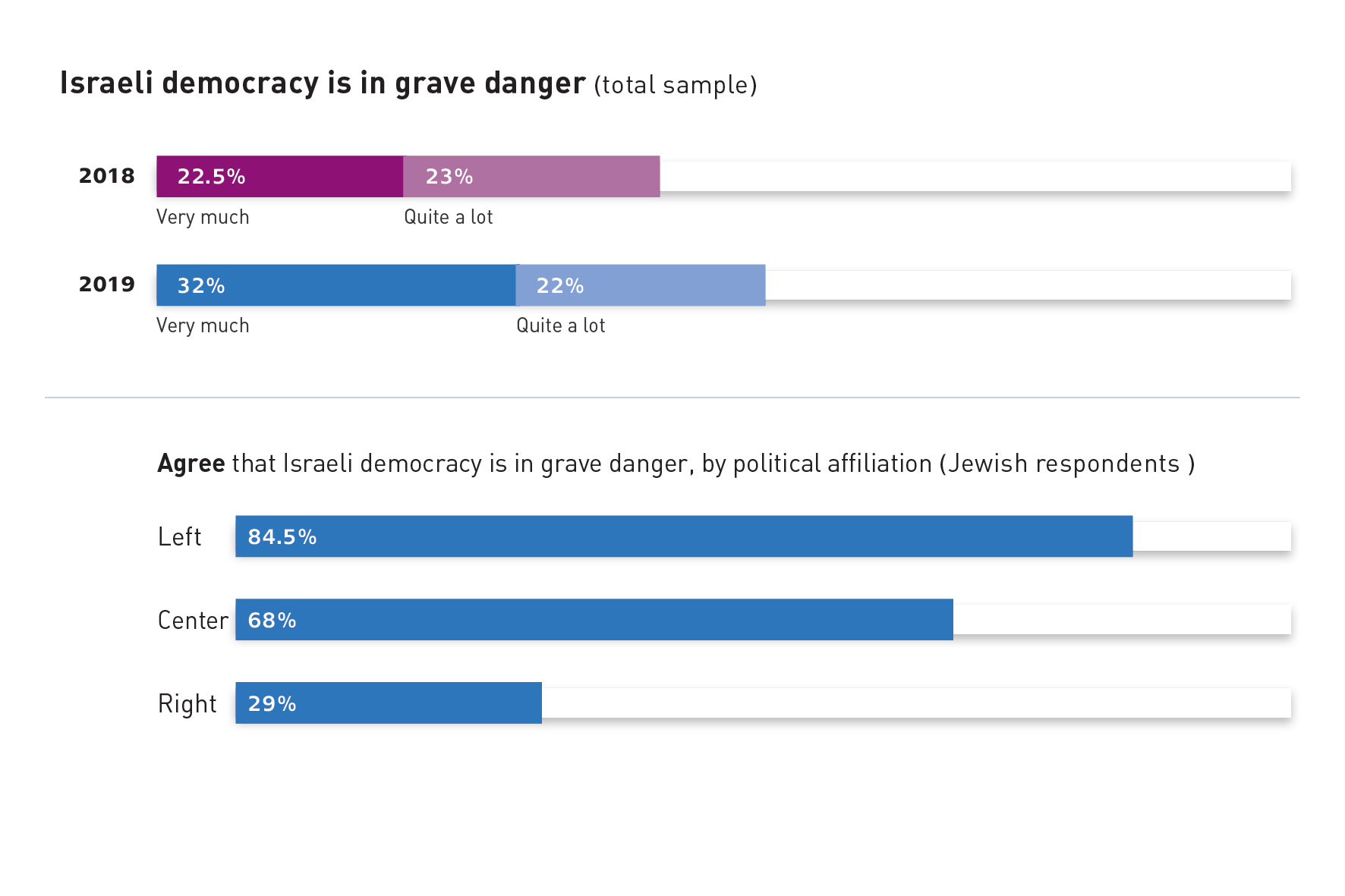 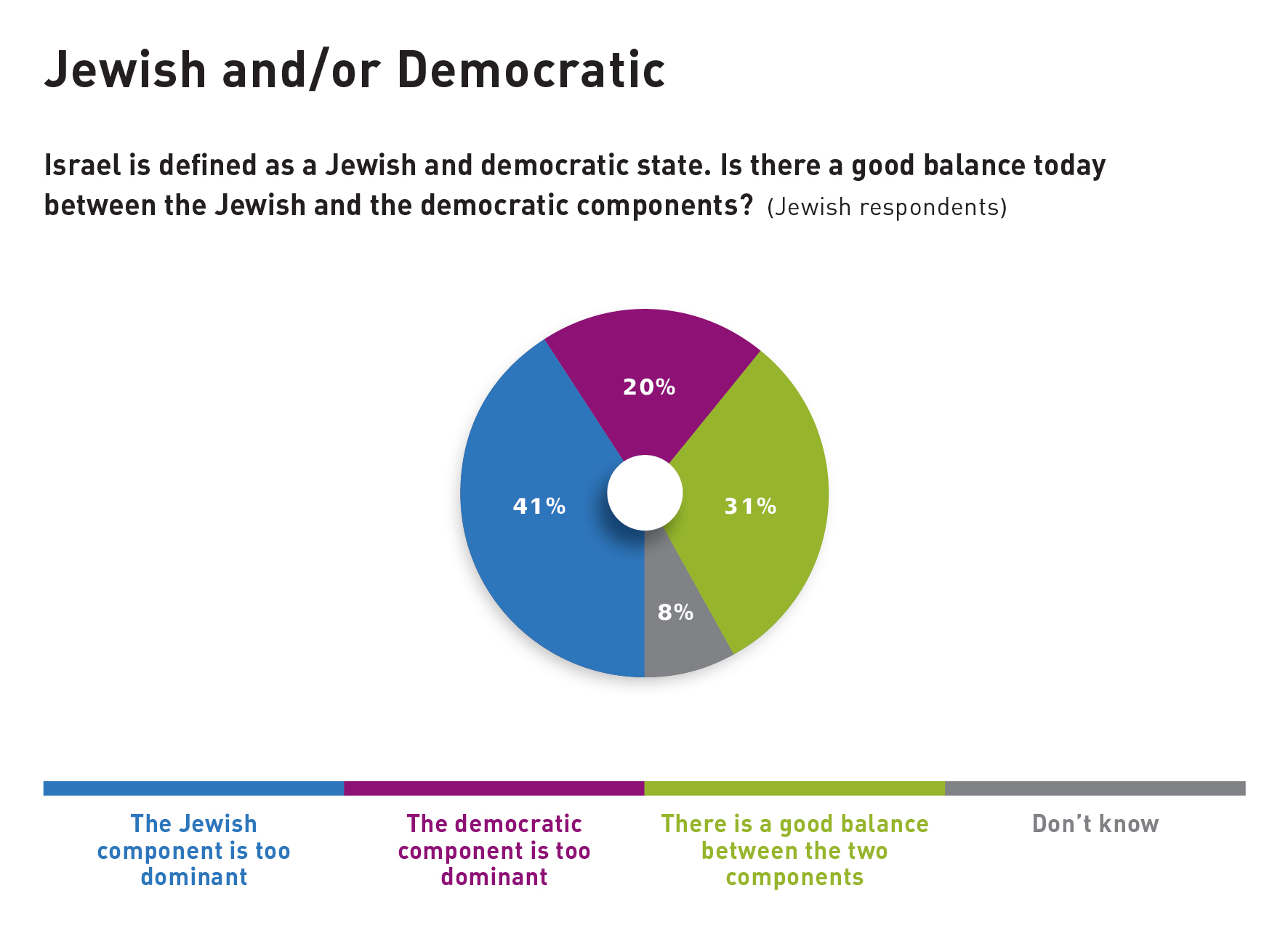 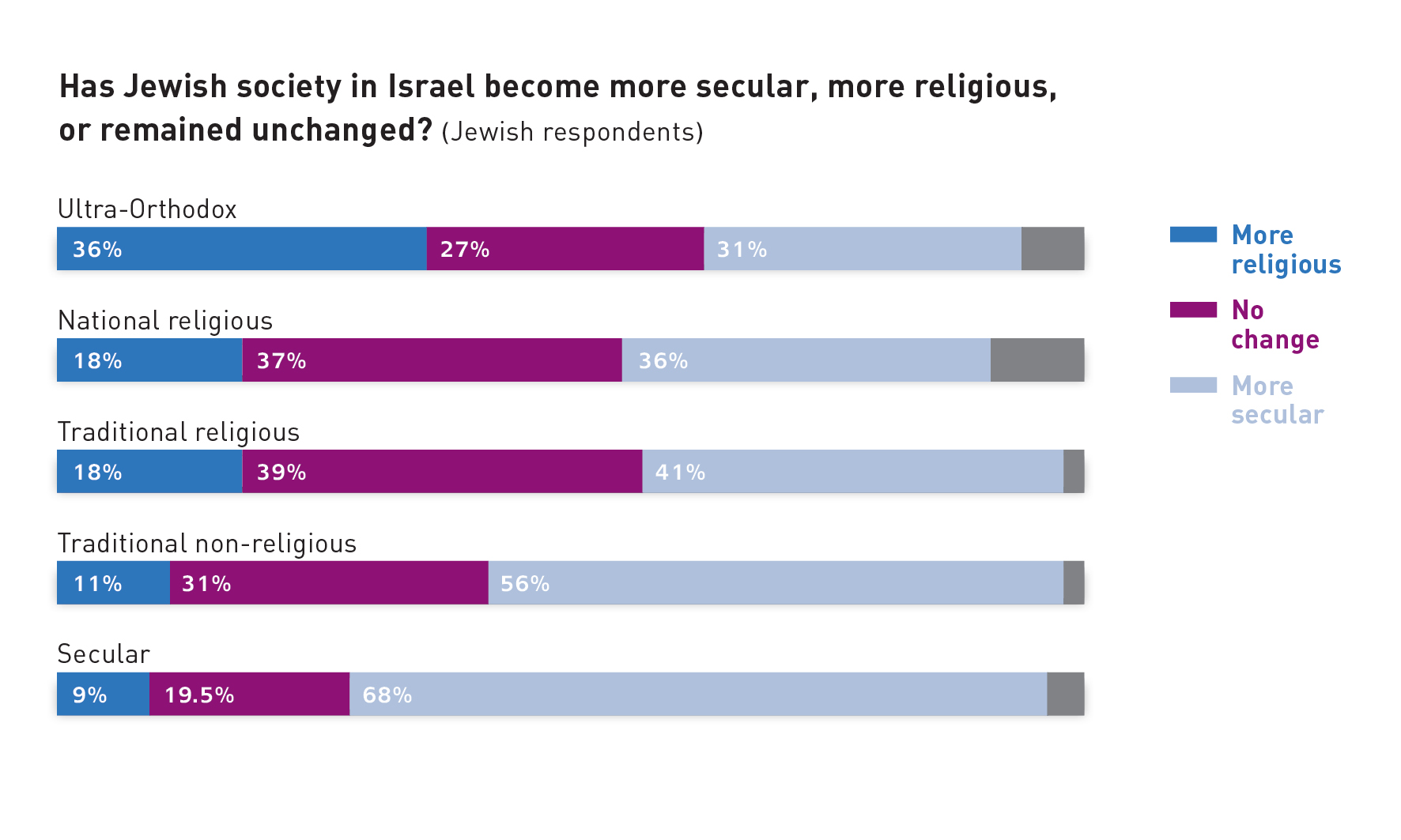 Rating the IDF - A large majority of Jewish Israelis (82.5%) believes that the IDF upholds a high level of moral conduct during combat and greatly values its operational capacity (77%). On the other hand, when it comes to matters relating to budgetary management, the welfare of conscripts and gender equality in the military, the public’s views towards the IDF are significantly lower – 32%, 43% and 46%, respectively.

The IDF is #1 - the IDF maintains first place when it comes to public trust in state institutions, with 90% of the Jewish public saying they trust the military - followed by the President of the State (71%) and the Supreme Court (55%). Less than half of Jewish Israelis trust the police (44%) and the media (36%). At the bottom of the list we find institutions with the least public trust in them: the Government and Knesset with 30% each, and political parties with only 14%.

Should the security budget be increased? Approximately one third of Jewish Israelis (32%) and the majority of Arab Israelis (58%) believe that defense establishment leaders exaggerate security threats in order to demand increases in the security budget. Agreement with the possibility that defense leaders have exaggerated security threats for budgetary purposes depends on respondents' political self-identification - 47% of the left, 29.5% of the center and 29% of the right (among Jewish Israelis)

Israelis expresses their concerns in the Index about the state of public service in the country. They say that they are skeptical of the decision-making process among senior officials in government ministries and are not certain that decisions by leaders are being made based only on professional considerations and are especially troubled with regard to the country's health and education systems.

59% of Israelis think that the legal rulings of Supreme Court justices are influenced by their political views. Among Jewish Israelis this opinion is held predominantly by the Right-Wing (78%) and the ultra-Orthodox (85%). Only 36.5% of the Left-Wing and 46% of secular Jews agree. 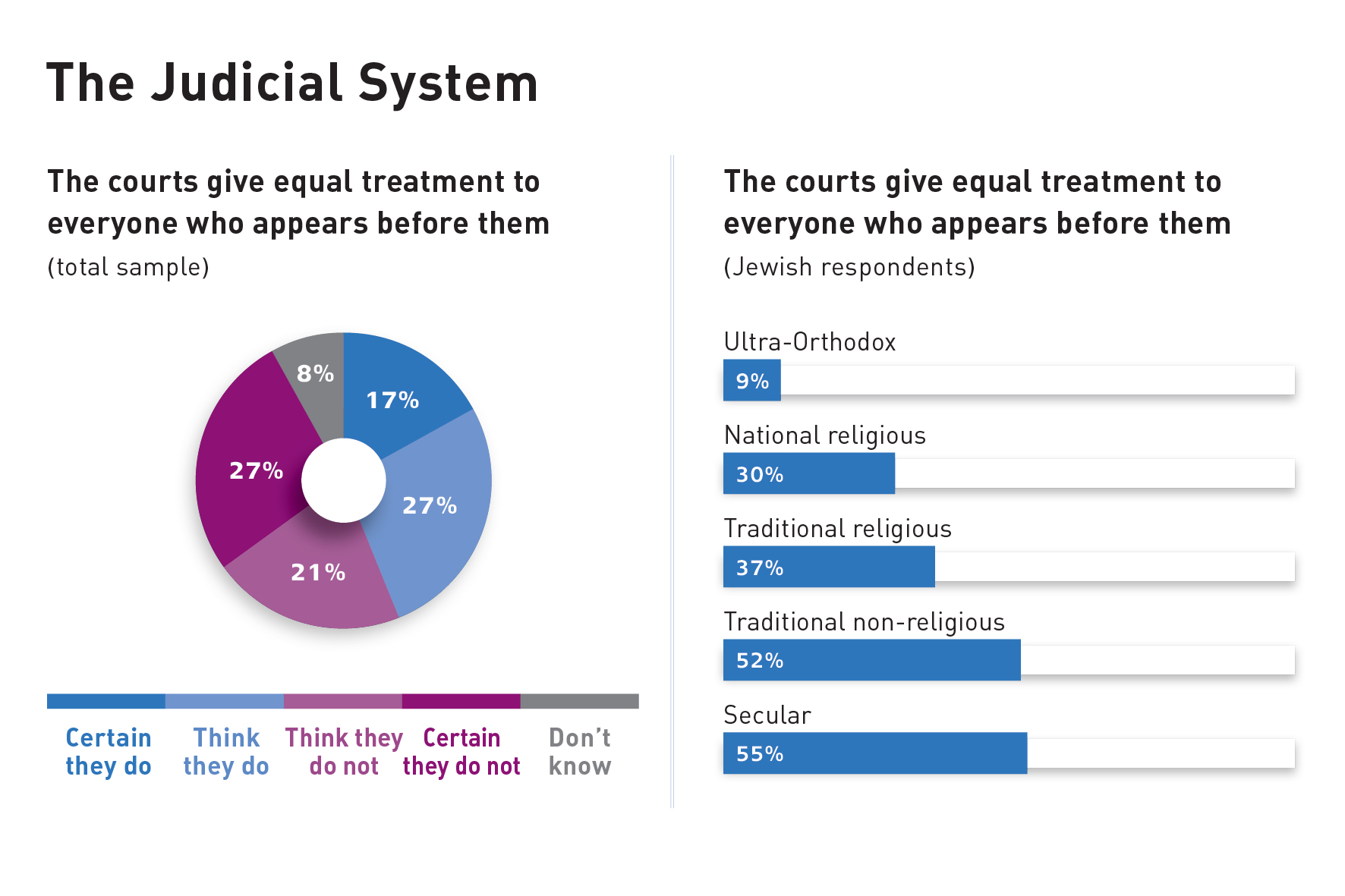 Education – 54% of Israelis believe the education system in Israel is not good and must be improved. In addition, both Jewish and Arab Israelis agree (69% and 64% respectively) that children in Israel do not enjoy equal opportunity or treatment, and that differences depending on their religious affiliation within the Jewish and Arab sectors. 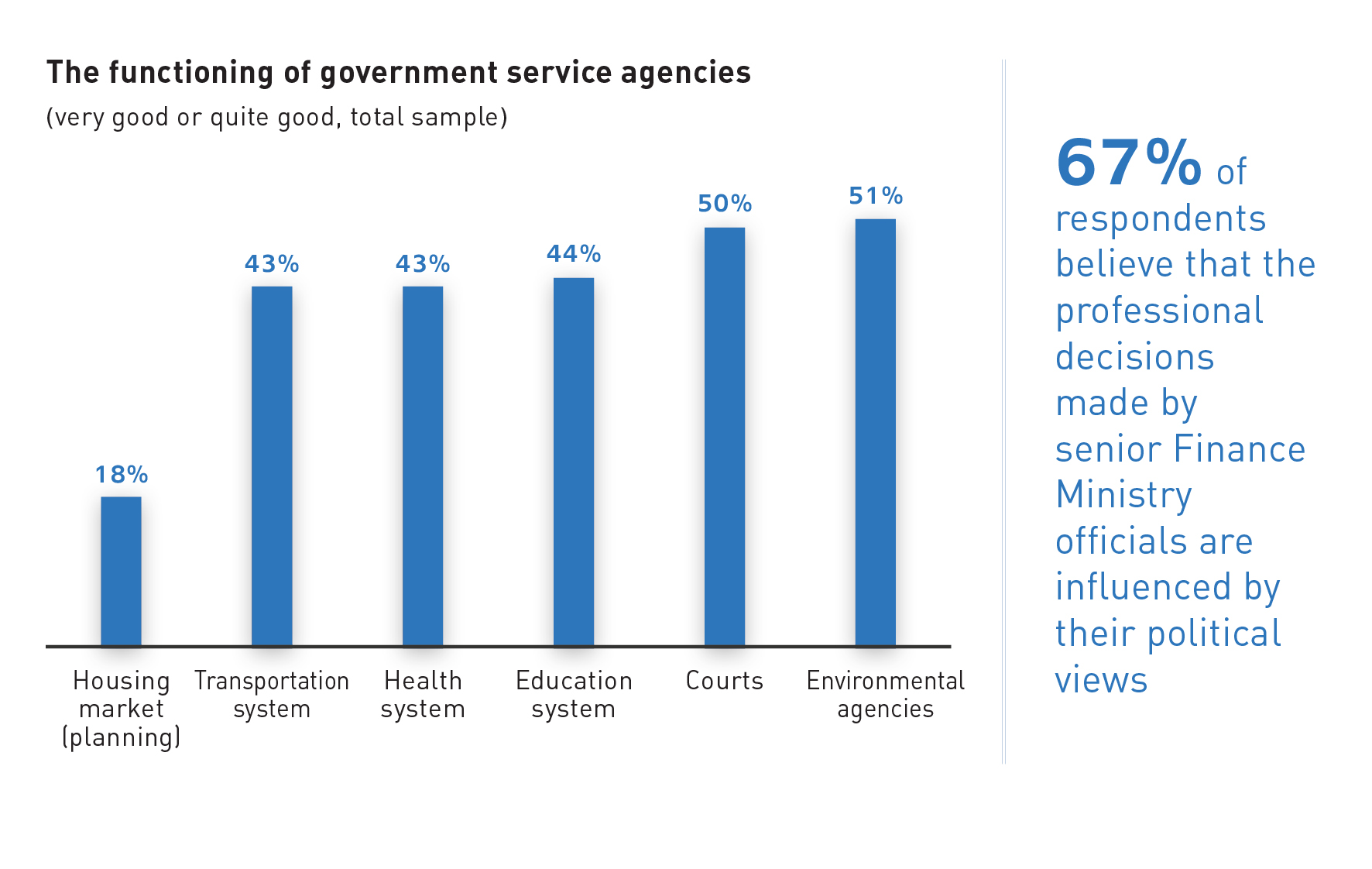 How to divide up the pie? – The majority of Israelis favor an increase in the budgets of almost all ministries: health (85%); education (77 %); welfare (76%); housing (68%) and transportation (67%). In addition, 45.5% believe that the police budget should be increased and 31% are in favor of increasing the IDF’s budget.

Public Service – the majority of Israelis think public service systems are not functioning well. The only systems which were rated positively by more than half of the public were environmental organizations (51%) and the courts (50%). Less than half gave good grades to the education system (44 %), transportation and health (43%) – while at the bottom was the planning of housing (18%).

Israel and the World – In comparison with 2018, this year Israel ranked lower on eight out of fifteen international indices, while maintaining its rank in six others and improving in one.

Israel’s rank in the World Bank’s Control of Corruption Index dropped substantially, and is at its lowest since 2013. As far as political participation is concerned, according to the Economist Index, Israel still outperforms most established democratic countries and ranks second in the world. In the Economist Government's Performance Index, which examines the level of democratic functioning and the efficiency of government institutions, Israel retains 27 out of the 167 countries included in the index, and is ranked 20 among 36 OECD countries. 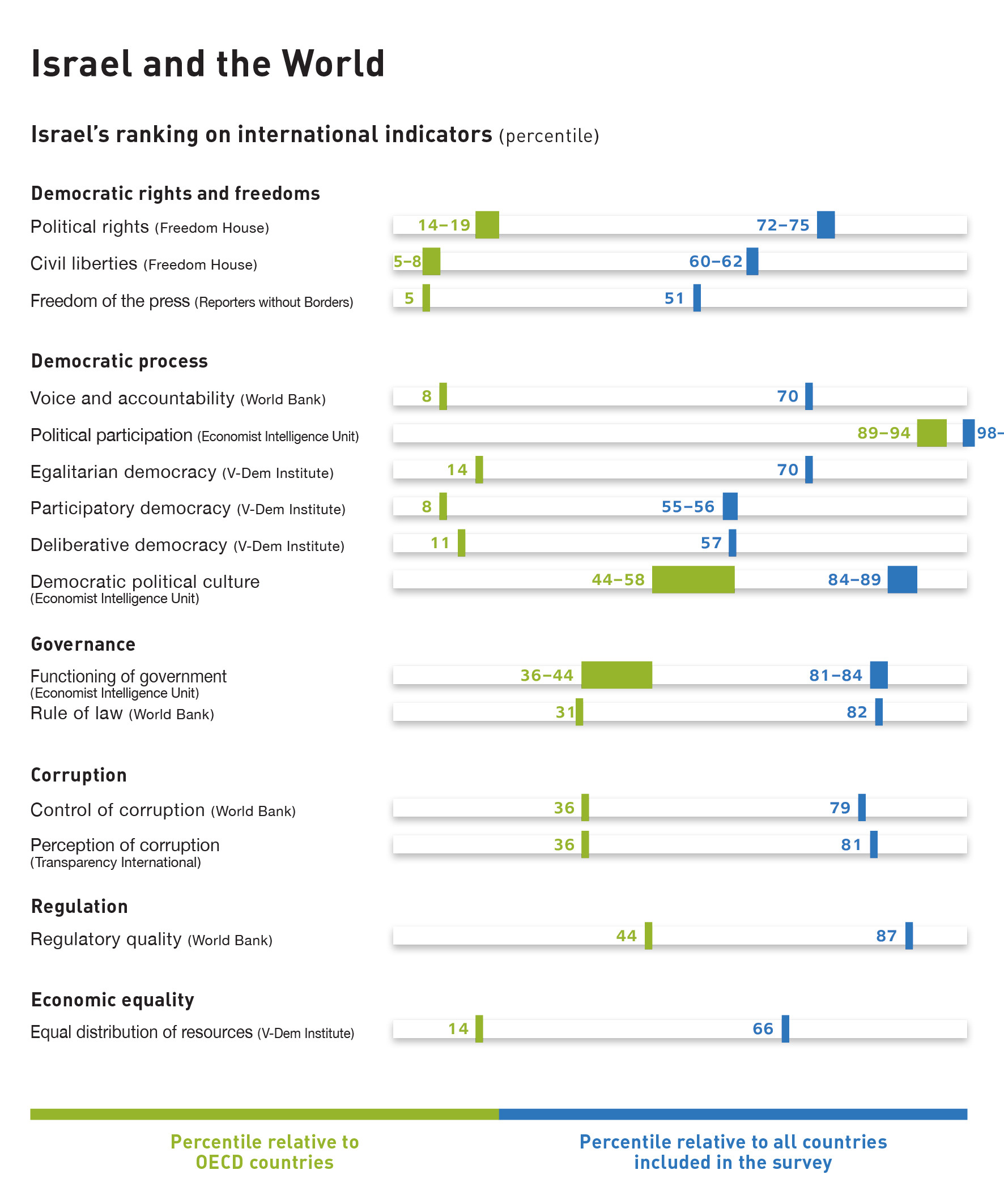 The Israeli Democracy Index was conducted for the 17th year by The Guttman Center for Public Opinion and Policy Research at the Israel Democracy Institute on the basis of a large-scale public opinion survey conducted in May 2019. The survey included 1,014 interviewees (852 Jews and others, and 162 Arabs), who constitute a representative sample of the adult Israeli population. The maximum sampling error for the entire sample was 3.1%± at a confidence level of 95%.