For the third time in less than a year, the lists of candidates were submitted, this time for the 23rd Knesset elections. Dr. Ofer Kenig, a researcher at the Israel Democracy Institute analyzes the situation:

The record low of lists elected to the outgoing Knesset (9) is expected to be broken once again. Based on recent opinion surveys, only eight lists are expected to make it past the threshold and into the Knesset (see below a graph showing the number of lists up for election and how many got in). The decline in the number of lists is the result of the higher electoral threshold set in 2015, at 3.25%. This relatively high threshold serves as a deterrent for smaller parties and encourages those at risk of not passing the minimum threshold to join forces with others with similar ideologies to run jointly and ensure that they both pass the threshold. This is often branded as “strategic unification” or “a technical bloc.”

It is of particular interest to note how the number of lists in the center-left has shrunk over the past seven years. In the 19th Knesset (2013), eight center-left lists were elected to the Knesset. For the 23rd Knesset we can expect only three: Blue and White, Labor-Gesher-Meretz, and the Joint List. It is noteworthy, however, that while the number of lists shrunk – the number of parties in the center-left bloc actually grew. In 2013, there were nine parties in the bloc, and today, the three lists are made up of ten parties: three in Blue and White, three in Labor-Gesher-Meretz and four in the Joint List.

It is important to follow this trend as we may be only at an intermediate stage which will be followed by permanent mergers of the smaller parties into the larger ones. On the other hand, the trend towards unification may be temporary. In the future, we may be seeing the emergence of even more 'micro parties,' reflecting the ongoing processes of political personalization in Israel. Additionally, in the case of the center-left, one possible explanation for the large number of parties, is that in reality – this bloc includes a number of parties traditionally associated with the right-wing national-liberal camp, such as Telem headed by Moshe (Bogie) Yaalaon (a party within Blue and White), and Gesher – headed by Orly Levi (part of the Labor-Gesher-Meretz alliance). 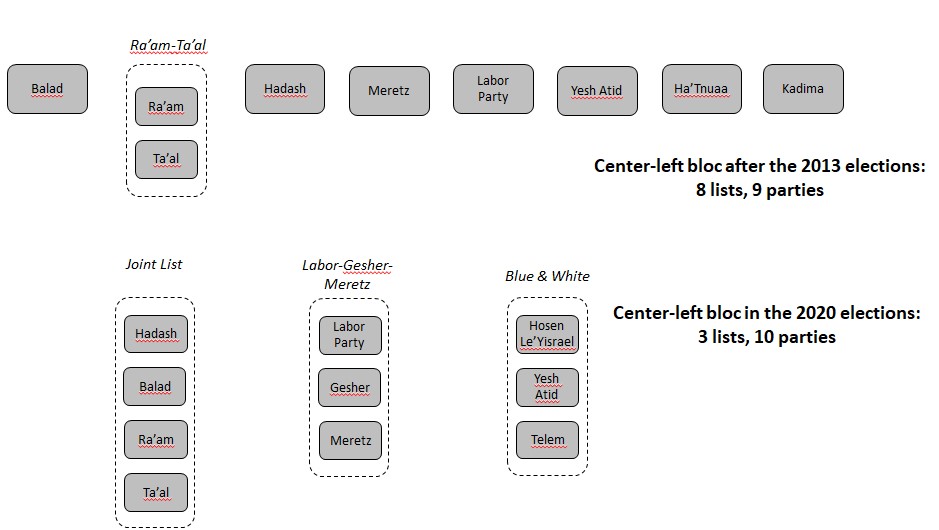 What will the next Knesset look like? The answer is – very similar to the previous two very short- lived Knessets. Between the April and September elections, there were a few changes: in the Labor party, Shelly Yachimovich, Avi Gabbay and Tal Russo quit; five MKS from Blue and White and the Likud were not elected; Naftali Bennett and Ayelet Shaked made a comeback after failing to get elected in April to the Knesset; Yisrael Beitenu and the Joint List grew stronger, and new MKS were elected. Nevertheless, the overall picture was very similar to the 21st Knesset.

Based on current surveys, we can expect even less changes in the next Knesset. In fact some of the lists are exactly the same (Joint List, Shas, Yisrael Beitenu, United Torah Judaism), while others changed only slightly. Unless there is a dramatic shift in the election results, we can expect to see only a few new faces in the 23rd Knesset.

We also do not foresee any significant changes in the extent to which the Knesset is representative of specific groups in Israeli society. Women’s’ representation, for example, is expected to continue to dither with less than 30 women MKs. Blue and White and the Likud will continue to lead with the highest number of women (10-11 women placed in the first 35 slots), but the share of women is higher in both Yamina (3 women in the top 8 slots) and Labor-Gesher-Meretz (4 women in the top 10). The Joint List is expected to elect 2-3 women from their list and, as expected, the ultra-Orthodox parties have absolutely no women on their lists.