After 18 months of political deadlock, Israel’s 35th government was sworn in - and in many ways it's quite unique.

Five years after the investiture of the fourth Netanyahu government, and after three back-to-back election campaigns and 18 months of political deadlock, the State of Israel’s 35th government was sworn in. The incoming Netanyahu-Gantz government, each taking their turn as prime minister, is unique in many respects. It is based on the principle of inter-bloc parity and on a mechanism for rotation in the position of prime minister—a mechanism that has created a new constitutional role of “alternate prime minister.” Though the coalition behind the government is not particularly broad, the government itself will include no fewer than 34 ministers, setting an all-time high record.

After two previous rounds of elections failed to lead to the formation of a new government, the results of the elections to the 23rd Knesset (held on March 2, 2020) were once again inconclusive. The Likud party received the largest number of votes (gaining 36 Knesset seats), but the “bloc” supporting Netanyahu took only 58 seats, three short of a majority. The bloc of parties opposing the formation of a government with Netanyahu at its helm, gained 62 seats in total, but the large ideological gaps among its component parties - prevented them from coming together to form a government.

Around ten days after being tasked by the president with forming a new government, the head of the Blue and White electoral list, Benny Gantz, announced his intention to enter into negotiations aimed at creating a unity government with the Likud, under the leadership of Netanyahu. This step resulted in Blue and White disbanding into three factions: Yesh Atid and Telem, refused to negotiate with Netanyahu and founded a joint Knesset faction with 16 members (“Yesh Atid—Telem”); two Knesset members broke away from Telem and founded the “Derech Eretz” faction; and the representatives of the Israel Resilience party retained the Blue and White name. On April 20, a coalition agreement was signed between the Likud and Blue and White, and the new government was sworn in on May 17.

A total of 76 days have passed between the elections and the swearing in of the new government. As the figure below shows, this is the longest time taken to form a government since 1961, an indication of the significant difficulties in reaching an agreement between the two sides. These difficulties stemmed essentially from a deep and mutual lack of trust between Netanyahu and Gantz, and from the legal situation in which Netanyahu is embroiled, facing multiple indictments on corruption charges. In fact, if we take into account the fact that the two previous elections did not end with the establishment of a government, then this government has taken a total of 404 days to form: from April 9, 2019 (elections for the 21st Knesset) until May 17, 2020 (swearing in of the 35th government).

Note: The figure includes governments established following elections. The number of days shown refers to the “gross” total—from Election Day until the swearing in of the new government in the Knesset.

At the time of its formation, the 35th government is based on a coalition of seven factions, which together hold 73 Knesset seatsThough MK Merav Michaeli (Labor) is a member of a faction that has joined the coalition, she does not consider herself a member of the coalition or obligated to it. MK Rafi Peretz, who broke away from Yamina, is expected to soon join the Likud faction , and thus is not counted here as a separate faction.. Of these, the four factions that constitute the “Likud bloc” hold 54 seats between them, while 19 seats are held by the three factions making up the “Blue and White bloc.” Despite the clear numerical advantage to the Likud bloc, the coalition agreement is founded on parity between the two sides: each has equal status in the government in terms of decision-making and in the number of its executive appointments (ministers and deputy ministers). The decision by Blue and White not to fill all its ministerial slots just yet, nor to appoint deputy ministers, does not undermine the parity principle as laid down in the coalition agreement. 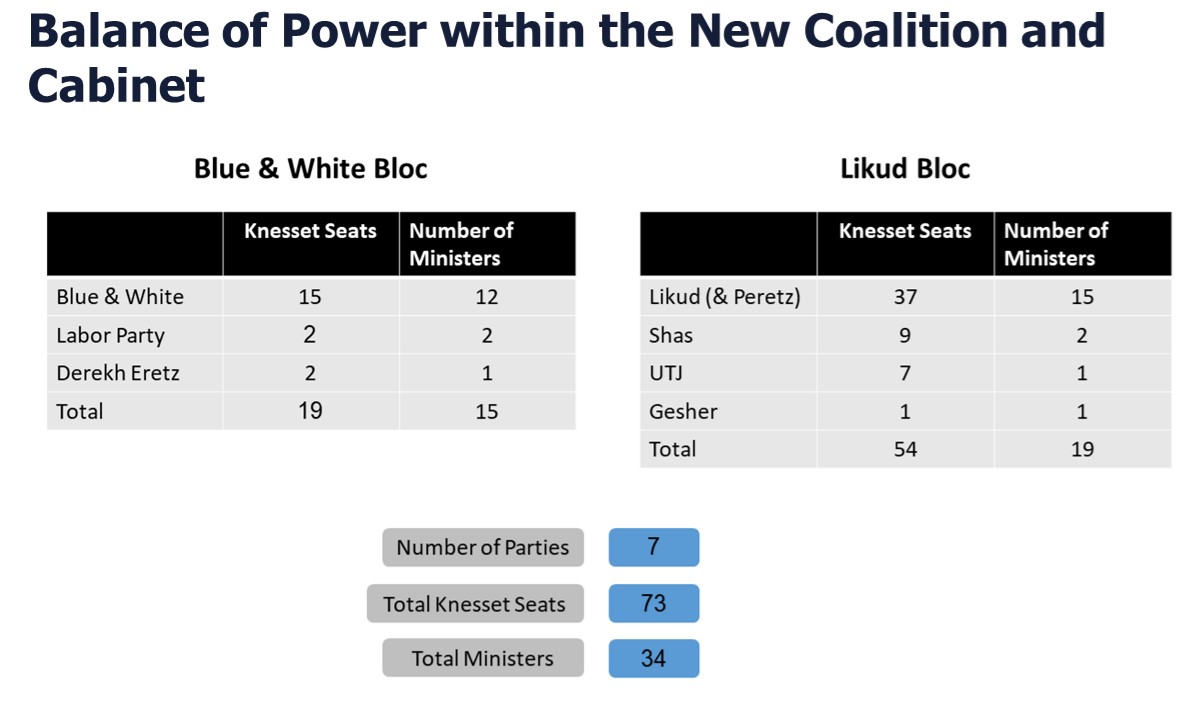 At the time of its formation, the 35th government includes 34 ministers- setting a new high record. Until now, the largest government was the second Netanyahu government, with 30 ministers initially sworn in (March 2009). As can be seen from the figure below, the number of ministers was much smaller during the first two decades of the state’s existence.

Number of Ministers (including Prime Minister) in Israel’s Government, 1949 - 2020

Even broad unity governments, such as those established in 1969 and 1984, did not include so many ministers. The “inflated and extravagant” government formed now has attracted fierce public criticism, mainly against the backdrop of the current health and economic crisis.

A Portrait of the Ministerial Appointees

About half (16 out of 34) of the government members will be serving as ministers for the first time. These include all the ministers from the Blue and White bloc (with the exception of Amir Peretz) as well as several ministers from the Likud bloc. Among the ministers with prior experience, those with the longest seniority in the Knesset are Prime Minister Netanyahu (17 years in government) and Israel Katz (14 years). Apart from Yaakov Avitan, the new Minister of Religious Affairs, all the other ministers are members of the 23rd Knesset. However, some of them are expected to resign their Knesset seats under the terms of what is known as the “Norwegian law,” which allows MKs appointed as ministers or deputy ministers to resign from the Knesset, and to make room for the next candidate on the electoral list to which they belong.

The average age of government members is 54. The oldest ministers are Yaakov Litzman (71), Prime Minister Netanyahu (70), and Amir Peretz (68); while the youngest are Meirav Cohen (36), Pnina Tamano-Shata (38), and Asaf Zamir (39). The latter three are also the only ministers under the age of 40.

Women in the Government

The 35th government sets a record for the number of women in ministerial positions, 8 – twice the previous record. To date, no more than four women have served as government ministers at any given time. Miri Regev, Gila Gamliel and Tzipi Hotovely are now joined by Orly Levy-Abekasis, Meirav Cohen, Orit Farkash-Hacohen, Pnina Tamano-Shata, and Omer Yankelevich. This is not only a record in terms of absolute numbers, but also in terms of percentages:--almost 24% of the incoming members of government are women, the highest percentage ever. Moreover, it seems that the significant rise seen over recent decades in women’s representation in the Knesset has finally trickled down to the government as well.

*30 women were elected to the 23rd Knesset, but MK Yael German has since resigned, and thus the number of women has fallen by one.

However, despite this significant upturn in the proportion of women in government, Israel is still below average in this regard, relative to other OECD countries. In recent years, there has been a growing trend towards governments with absolute—or close to absolute- gender equality). Such governments are currently in power in countries including France, Germany, Canada, Austria, and Sweden.

Jews/Non-Jews and Country of Birth

All of the 34 ministers in the new government are Jewish. This may not take us by surprise, given that throughout the history of the State of Israel only three non-Jewish ministers have served in government: Salah Tarif (appointed in 2001), Raleb Majadele (2007), and Ayoob Kara (2017). Nevertheless, given the new government’s huge size, the complete lack of any Arab representation is particularly jarring.

After almost a decade, the kibbutzim once again have a representative in government—Alon Schuster, from Kibbutz Mefalsim. By contrast, the new government includes only one resident of Judea and Samaria (Dudi Amsalem, from Ma’ale Adumim), while by contrast, four “settlers” served in the previous government at one time or another.

Two ministers reside in development towns (Amir Peretz, from Sderot, and Michael Biton, from Yeruham). Interestingly, while five ministers are from the south of the country, the only minister residing in the north is Orly Levy-Abekasis. The fact that the Yamina party has remained outside the government has not had a negative effect on the representation of the religious Zionist community in the government, with Yuli Edelstein, Ze’ev Elkin, Tzipi Hotovely, Rafi Peretz, and Hili Tropper belonging to this community. In addition, four ministers identify as ultra-Orthodox: Aryeh Deri, Yaakov Litzman, Yaakov Avitan, and Omer Yankelevich.