The Israeli Voice Index for June 2020 found that Israeli public opinion is divided over the question of whether the government should apply sovereignty in the West Bank and, if it goes forward, what such a plan should look like. 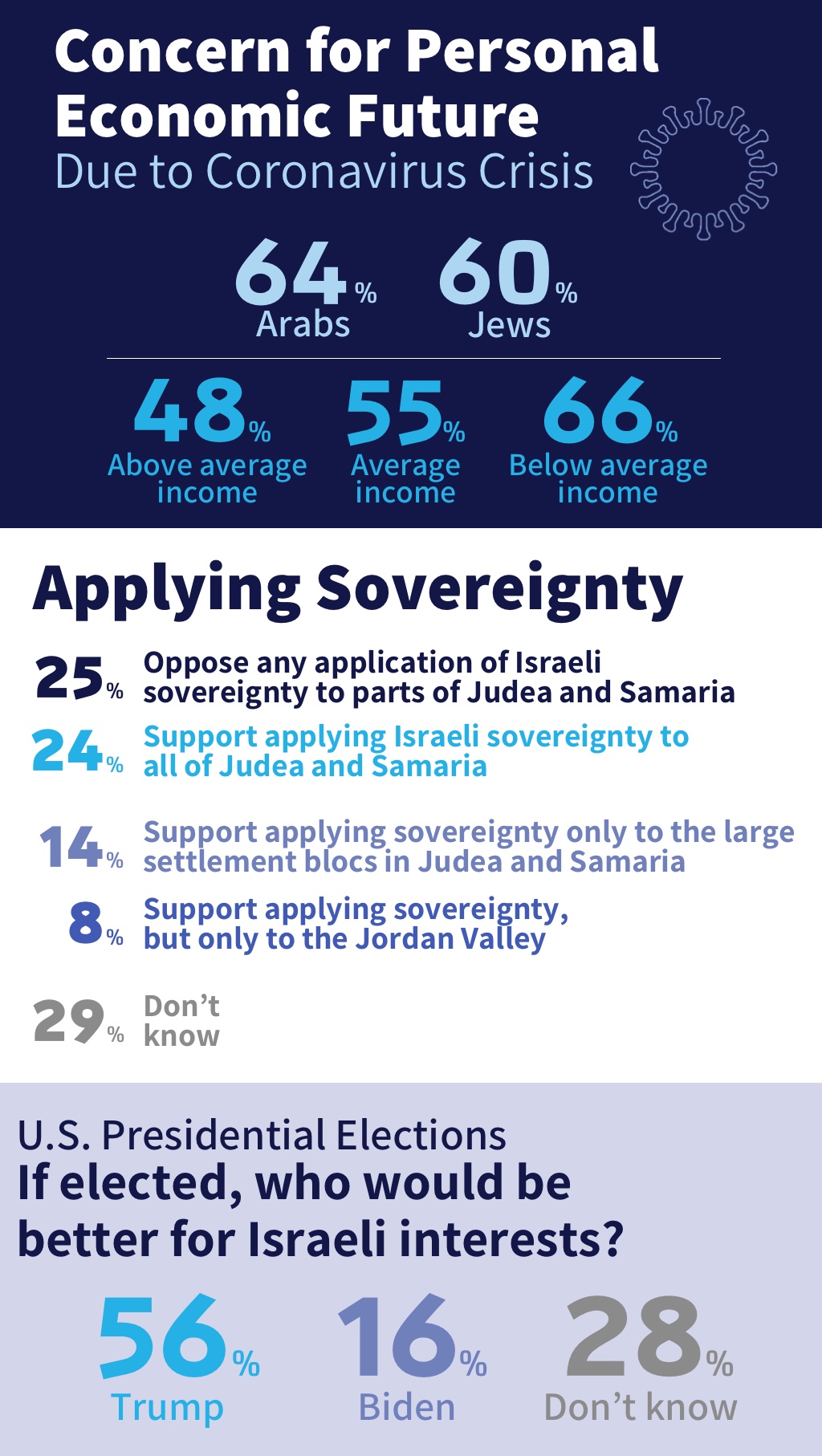 * Among those who support applying sovereignty, only about half retain that opinion if the price is agreeing to a Palestinian state.

* Meanwhile, as in the past, a majority of the public sees low chances that a move to apply sovereignty will indeed be made in the coming year.

* The grade the public currently gives the government for its handling of the coronavirus crisis is “Barely adequate.”

* Particularly in the Jewish public, fear for the economic future has increased. It is particularly strong among the young, the secular, and those of higher-than-average income.

* A majority of the public supports the protest by the artists and those in the entertainment industry, who are demanding compensation from the state for the ongoing stoppage of cultural performances and activities due to the coronavirus crisis.

* A majority of the Israeli public thinks the Black Lives Matter protest in the United States is justified. At the same time, the majority opposes the destruction of national monuments to individuals or events now considered discriminatory or racist.

* As the U.S. presidential elections approach, a majority of the Israeli public believes that current president Donald Trump will be better for Israel’s interests if elected than his competitor Joe Biden.

Possibly because of the despondent national mood lately and possibly because of the issues themselves, this month, too, saw a trend of declining optimism about Israel’s national security and the future of its democratic governance. At the same time, the gap in optimism between these measures remains: regarding security, the majority of the entire public is still optimistic (55%), but only a minority holds that attitude regarding the democratic future (39%).

For or against? With the public still in the dark and not apprised of any clear plan for applying Israeli sovereignty to territories regarding the timing, the size and location of the lands in question, and the implications for the future of the Palestinians who live in them, there is still no clear public opinion in Israel on this issue. This is reflected in the wide distribution of positions and in the huge rate of those who do not know, as the next diagram shows:

The public’s positions on the different options for applying sovereignty (%, entire public)

As expected, a segmentation of the Jewish sample by political camps turns up wide disparities. On the left, a clear majority opposes any measure of this kind. On the right, the majority is in favor, and the most popular version is annexation of all of Judea and Samaria.

Positions of the political camps on different options for applying sovereignty (%, Jews)

If the U.S. administration conditions applying sovereignty on agreement to the establishment of a Palestinian state, should Israel still apply its sovereignty? (%, entire sample)

Will or won’t it happen? Apparently one of the reasons the public takes no solid position on the issue at this stage is that the majority does not believe the move will be made. The rate of those who take that view has increased since April when we first asked the question. Here too the rate of “Don’t knows” in the entire sample is high (18%), but much lower than on the question of support for the different forms of applying sovereignty.

And what are the chances, in your opinion, that Israel will indeed apply its sovereignty to parts of the West Bank/Judea and Samaria in the coming year? (%, low or very low chances of applying sovereignty)

A segmentation of the responses to the question of likelihood by political camps (Jews) reveals that the majority of each of the camps, with the exception of one (the non-moderate right), sees the chances of applying sovereignty as low or very low, with the highest rate for that view found on the moderate Left:

And if sovereignty is applied, what rights should be given to the Palestinians in the relevant land? Among the Jews, the highest rate (36%) says the Palestinian residents of the lands to which sovereignty will be applied should not be given rights beyond those they have today. Among the Arabs who had an opinion (many gave a “Don’t know” response on this question), the highest rate (though not a majority) considers that they should be given citizenship.

A comparison of this month’s distribution of responses on this issue to April this year, when the question was asked in that form for the first time, does not show a substantial difference between the measurements, apparently because the issue does not look realistic and seems to be perceived as secondary to the coronavirus crisis.

If Israel applies sovereignty to territories in Judea and Samaria/the West Bank, what political status should it give to the Palestinian residents of those territories? (%, Jews and Arabs)

Unlike on many other issues, on this one the Arab public’s assessment of the government’s performance is higher than that of the Jewish public (5.85 vs. 5.31). Considerable gaps were found between the different political parties, with the government receiving a higher (though not particularly high) grade from voters for the Haredi parties, Likud, and Yamina, and a lower grade from voters for Labor-Gesher-Meretz and Blue and White.

Average grade for the government’s handling of the coronavirus crisis by voting (%, entire public)

Fearing for their economic future – This month saw a notable rise in the Jewish public’s fear on the economic issue. This came after a certain decline in this fear for about two months, since mid-April. In this month’s survey, 60% of the Jewish interviewees said that they fear for their economic future. Notably, however, fear among the Arab interviewees decreased somewhat this month, though it is still higher than in the Jewish sample (64% are afraid).

To what extent do you fear or not fear for your economic situation in the foreseeable future? (%, entire public)

A segmentation of the Jewish sample locates most of the rise in fear in the Jewish public among the secular (from 50% three weeks ago to 64% at present) and among the young (up to age 24: from 48% to 60.5%; age 25-34: from 58% to 67%). A segmentation by income reveals that the sharpest rise in fear occurred among those with higher-than-average income (from 31% three weeks ago to 48% at present), perhaps because the depth of the crisis, which so far had hurt this economic stratum less, is now becoming clear and affecting it as well.

The artists’ protest – In recent weeks the media especially highlighted the protest by the artists and those in the entertainment industry. Findings of this month’s survey show that almost two-thirds of the entire public (65%) supports the protesters’ demand to be compensated by the state amid the almost complete stoppage of their activity for three months. Although the majority in each of the three political camps (Jews) supports the artists’ demand, on the left the support is total while on the right the majority is smaller.

Supporting the demand of the artists and members of the entertainment industry to be compensated by the state (%, entire sample)

On the Events in the United States

The Black Lives Matter protest has been getting extensive media coverage in Israel. We wanted to know whether, in the Israelis’ opinion, this protest is justified or not justified. We found that in the entire sample, about two-thirds see it as justified and about a fifth as not justified. Among the Arab respondents, the rate of those who view it as justified is slightly higher than among the Jews, but the rate of those who chose the “Don’t know” option is considerably higher than in the Jewish sample.

Is the Black Lives Matter movement justified or not justified? (%, Jews and Arabs)

Trump or Biden? As the U.S. presidential elections approach, we asked: From the standpoint of Israel’s interests, which, in your opinion, of the two candidates in the upcoming U.S. presidential elections is preferable—Donald Trump (Republican Party) or Joe Biden (Democratic Party)? Although more than a fourth of the interviewees chose the “Don’t know” option, in Israeli public opinion the pendulum clearly tilts toward preferring Trump.

Who is preferable in terms of Israel’s interests? (%, entire sample)

The gaps between the political camps (Jews) are as expected: the left thinks Biden is better for Israel (though not by a large majority), the center leans more toward Trump, while the right favors him by a large majority. In all the camps the rate of “Don’t knows” is high, but in the center it is particularly high.

The Israeli Voice Index for June 2020 was prepared by the Guttman Center for Public Opinion and Policy Research of the Israel Democracy Institute. In the survey, which was conducted on the internet and by telephone (supplements of groups that are not sufficiently represented on the network) from June 28 to 30, 2020, 609 men and women were interviewed in Hebrew and 149 in Arabic, constituting a representative national sample of the entire adult population of Israel aged 18 and older. The maximum sampling error for the entire sample was 3.7%± at a confidence level of 95%. The fieldwork was done by the Midgam Institute. For the full data file see Data Israel.