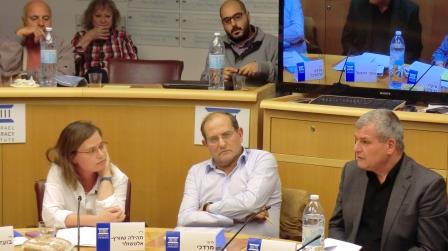 Democracies around the world face challenges, and Israel, with its own unique circumstances, is no exception. The Israel Democracy Institute has, since it was founded by Arye Carmon in 1991, been at the forefront of strengthening Israeli democracy by identifying the challenges it faces and proposing ways to overcome them.

“That may sound self-evident,” Plesner continues. “But sustaining Israeli democracy continues to be more and more of a challenge... Our democracy is under great pressure due to security and other concerns.

“When there is security tension, people look for quick fixes and there is a major incentive for politicians to come up with all kinds of proposals that will be popular.”

External pressures and internal struggles over the definition of good governance can sometimes cause an increase in the number of legislators looking to stand out among the crowds. Legislators will wrangle over who is the most patriotic, nationalistic, etc.

One way to do this is by proposing legislation. Over the past decade, IDI has seen an increase in populist legislation. Sometimes this legislation targets the opposition or is meant as a PR move. Other times, as IDI’s Dr. Tehilla Shwartz Altshuler explains, the populist proposals target a problem that really exists, but fails to actually get to that problem’s core and solve it.

IDI addresses potentially populist legislation from the ground up by working with legislators from the earliest stages. Through a mechanism that identifies proposals related to issues such as freedom of expression or association, separation of powers and the judiciary’s independence – usually private member bills, but sometimes government initiatives – IDI scholars reach out to members of the Ministerial Committee for Legislation, the first step in the legislative process for most bills.

Then IDI releases a short position paper that defines why scholars are for or against the bill. Tackling the bill section by section, the policy statement will identify problems in the legislation and suggest improvements. That policy paper will be sent to ministers, MKs, senior civil servants and the media to effect change.

These papers regularly serve as the first step in cooperation between IDI and legislators and often lead to concrete changes in proposals, their removal from the agenda, or spur them toward passing into law.

IDI vice president for research Prof. Mordechai Kremnitzer, Shwartz Altshuler, and Dr. Amir Fuchs, who heads IDI’s Defending Democratic Values project, offer myriad examples of ways their work impacts (or has impacted) that of the Knesset and government. For example, the appointment of a Justice Ministry oversight czar, which the think tank proposed, was at first considered controversial. However, the position was instituted with the support of IDI in 2013, via government order, and the ministry is working on increasing the position’s power with corresponding Knesset legislation.

Another example is a recently imposed requirement for lobbyists to register before entering Knesset committees, which was a policy IDI long advocated before it was implemented.

Another way IDI research has impacted government policy is in relation to the government’s emergency defense regulations, by which the government has sweeping executive powers, such as the use of administrative detention. In 1999, Kremnitzer published research and a recommendation to cancel the regulations, which were enacted at the time of the British Mandate and are renewed regularly by the Knesset. In 2016, the Knesset is discussing the “bill to fight terrorism,” which could partially cancel the emergency regulations, adopting some of Kremnitzer’s suggestions.

“We have accompanied the bill to fight terrorism over many stages,” Kremnitzer recounts. “It started when the Justice Ministry offered to discuss it with us while it was in the ministry, and we prepared a document. Following that discussion, they made certain changes.”

IDI staff continued to follow the bill’s progress in the Knesset Law, Constitution and Justice Committee, making
suggestions and comments there, as well.

Fuchs, who has been advising on the bill to fight terrorism, says among the changes recommended by IDI and adopted by the committee are narrowing broad definitions of an act of terrorism and defining what it means to be affiliated with a terrorist organization – “there were all kinds of ridiculous ideas of how a person becomes an activist in a terrorist organization,” he remarks – and removing a clause of abetting terrorism through negligence.

Making those changes is a process than can take time – often years.

“Sometimes things pass piece by piece,” says Kremnitzer. “We know from experience that things take time. Sometimes you prepare a paper that is ready today, but it can take three, five or even more years until it is ready to become a bill.”

Shwartz Altshuler, head of IDI’s Media Reform Project, experienced a similarly long waiting period, recommending more than a dozen years ago that the government cancel the British Mandate-era Press Ordinance requiring a license from the Interior Minister to open a newspaper and allowing the minister to shut newspapers down if he or she feels the paper endangers the public order.

In early March, after Interior Minister Arye Deri decided to cancel the ordinance, Shwartz Altshuler took her suggestions for how to replace it “out of the attic” to give to the Interior Ministry.

“When it came up, we had a letter with proposals ready for the Interior Ministry,” she says. “Sometimes there are things you know have to be done and all kinds of constellations prevent the government from doing it. When the right moment comes, we can address them.”

One bill that IDI hopes to influence is recently proposed legislation that would allow MKs to vote to suspend one of their colleagues if a two-thirds majority of MKs feel he or she incites to terrorism or opposes Israel as a Jewish and democratic state, among other reasons.

Kremnitzer explains why the IDI is opposed to the bill.

“We have very broad prohibitions against terrorist activities or supporting or aiding them,” Kremnitzer says. “If an MK breaks one of those laws, [he or she] like anyone else, must be put on trial, and if convicted, will probably be of a crime carrying moral turpitude, and his or her service in the Knesset ends. The advantage of this is that the person who decides on the facts and who broke the law is the attorney-general, based on a police investigation, and then the court, which is neutral and apolitical, unlike the Knesset.”

Fuchs points to IDI’s comparative research on the subject, which undermines the bill’s defenders’ claims that it is less stringent than a related clause in the US Constitution.

In the US, “the party to which someone who may be expelled belongs must be among the expellers. The proposal in Israel requires [90 out of 120 MKs] to vote to remove an MK from a different party,” Fuchs explains.

“The ability to give context and comparative context, in many ways makes a difference when we talk to MKs. They need this information,” he adds.

Another bill IDI is combating is one that would require NGOs that receive most of their funding from a foreign government to label themselves as such in all publications, advertisements, meetings with politicians and appearances in Knesset committees.

Kremnitzer explains that the problem the bill’s proponents point to – foreign government intervention in Israeli policies and support for organizations that seek to put Israeli officials and officers on trial – is not solved by the bill.

“They won’t stop NGOs from acting,” says Kremnitzer. “The [NGOs’] activities are legal. If they do something illegal, there are tools in the penal code and the NGO registrar has ways to act against them.

"The point that outrages us with this bill is that it’s built on false pretenses,” he continues. “It’s meant to label NGOs as if they’re acting on behalf of those countries, but if we check their actions, it’s clear [the NGOs] are acting according to their own view of what needs to be fixed in Israeli society, whether it’s women’s rights or Palestinians’ rights or stopping torture of detainees... They’re not acting as representatives of Germany or the EU, so to present them as agents of those countries is simply wrong, unfair and mistaken.”

The bill’s proponents “say they want transparency, but transparency exists under law already,” she says, pointing out that IDI scholars believe the NGO bill may be specifically aimed at left-wing human rights organizations that tend to receive large sums from Europe and other foreign entities.

Many of the bills come from the Right, which makes up the current coalition and much of the last one, but Fuchs makes sure to point out that he has written papers about proposals by the Left, as well, such as about the “Israel Hayom bill,” which would have shuttered the popular, free daily newspaper.

The IDI staff was careful to clarify that they are not a partisan organization and their criticism and suggestions are not reserved for one side of the political map.

To that end, the IDI has published books about the democratic values of Likud ideological forebear Ze’ev Jabotinsky and first Likud prime minister Menachem Begin, focusing on their defense of an independent judiciary, minority rights and freedom of expression in their speeches, written works and political action. They are working on another book in the series, about Zionist visionary Theodor Herzl’s democratic vision.

“We have an overarching mission to bring democracy and democratic values to the consensus. Democracy should be a basic assumption that is not up for debate.”

Plesner says there are politicians who try to turn democracy into a word that is identified with one side of the political map. IDI tries to demonstrate that democracy doesn’t work that way.

“There is no strong, sustainable Israeli society without all the major players being dedicated to democracy,” says Plesner.

“There are big challenges, but a lot of our goals, at least on a declarative level, are in the consensus, and we need to make changes to policy and legislation that, in the end, will stick.”