A new IDI survey finds that 55% of Israelis are optimistic, compared to previous surveys, about Israeli society's ability to overcome the coronavirus crisis (up from 45% in September). Despite the latest scientific breakthroughs, the survey finds that Israelis are wary about partaking in the first round of vaccinations when they become available with only 47% of men and 33% of women saying that they would agree to be first in line to be inoculated.

Trust in Prime Minister Benjamin Netanyahu's handling of this crisis continues to be low, though it has risen to 37% compared to a low point of 27% in our September survey. Finally, 55% of Israelis say that they have trust in their local municipalities to manage the corona crisis.

This survey is the fourteenth in a special series by the Guttman Center for Public Opinion and Policy Research at the Israel Democracy Institute. It examines the public attitudes towards government policies relating to the coronavirus outbreak and to the economic fallout from the pandemic.

Prof. Tamar Herman, Director of the Guttman Center for Public Opinion and Policy Research at the Israel Democracy Institute: "There is a somewhat optimistic trend among Israelis regarding the country’s ability to recover from the current crisis. This optimism is rooted in three possible causes: positive developments towards a vaccine; the relatively low number of infections and deaths; and the reality that Israelis have now learned to live alongside COVID-19."

Would agree to be vaccinated in the first round of vaccination (%, Jews and Arabs, Gender)

Would agree to be vaccinated in the first round of vaccination (%, Jews, ultra-Orthodox-secular spectrum)

The main reasons people think that others adhere to the government instructions on preventing coronavirus spread include: fear of being infected by the disease (35%), fear of punishment for breaking the law (32%), don't want to endanger at-risk populations (17%) and civil obedience to the law (11%).

Fear for the future – Economic anxiety has dropped slightly, with 59% of Israelis now fearing for their economic future. The survey found substantial differences between Jews and Arabs (55% and 81% respectively).

Segmentation by age found that among Jews and Arabs alike the levels of fear for their economic future went up among younger populations. This is because temporary economic impacts are less significant for those whose status in the labor market is already stable while young people at the beginning of their careers in the labor market are more affected by the current situation, as well as a large proportion of workers without employment stability or low income.

Fear for their economic future (%, Jews, Arabs, by age)

Trust in leadership – 37% of Israelis trust in Prime Minister Netanyahu’s management of the coronavirus crisis.

Trust Prime Minister Netanyahu in leading the effort against the Corona crisis (%, by party according to the last elections, total sample) 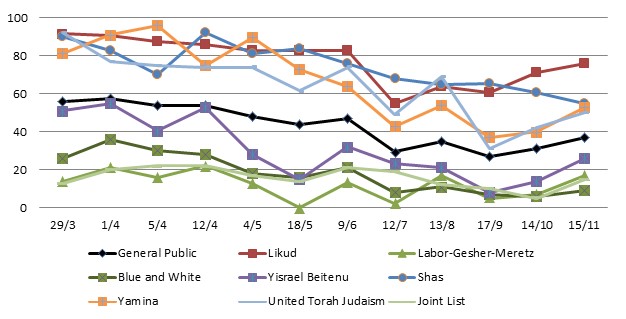 It is interesting to note that the survey found that 55% of the public trusts their local municipality to handle the corona crisis.

Do you have faith in your local municipality to handle the corona crisis? (%, total sample)

Increasing Optimist – slightly more than half (55%) of Israelis are optimistic about Israeli society’s ability to overcome the current crisis. This is up from the lowest level of optimism recorded in the middle of September.

Optimistic about Israeli society’s ability to overcome the current crisis (%, Jews and Arabs)