The following data is based on a survey-- The Labor Market in the COVID-19 Pandemic--soon to be published by the research team at the Center for Governance and Economy, headed by Daphna Aviram-Nitzan at the Israel Democracy Institute.

The survey was carried out at the beginning of December 2020Responses were collected between December 6 and December 16, 2020. (before the third lockdown, which began at the end of December and was followed by more stringent restrictions put into effect in the second week of January 2021), and based on a representative sample of workers in IsraelThis relates to workers who were working before the outbreak of the pandemic.. This chapter presents findings based on the responses of approximately 150 self-employed workers who participated in the survey.

These data reveal a deterioration in the situation as compared to June 2020, when around 80% of self-employed respondents were working, and around half of those (42%) were working only part-time. 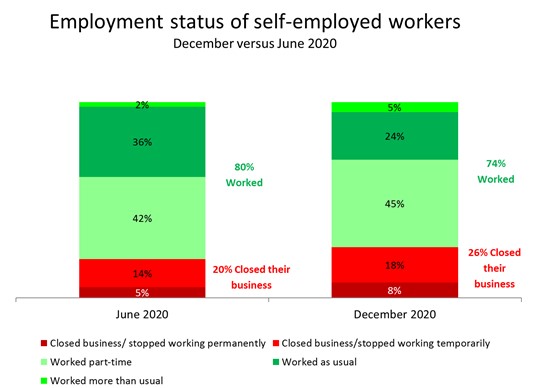 As in June, most self-employed workers who had been forced to close their business by early December, had done so on a temporary basis (18%, out of the total 26%), though a sizable share—almost one-third—had shut their doors for good (8%, out of 26%). By comparison, in June, 14.4% had closed temporarily and 5.4%—permanently. 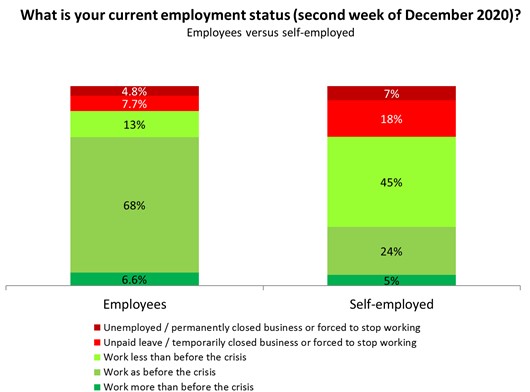 The Corona crisis has severely affected the employment situation of the self-employed, as compared with employees; as of the second week of December, about 74% of the self-employed were working, but most (45%) reported part-time work and only a minority (24%) continued to work similarly to pre-Corona levels. In contrast, in early December 2020, 87% of employees reported that they were working; most (68%) continued to work the same number of hours as before the crisis and only 13%---less hours than before the Corona crisis.

As of the beginning of December, the average length of time that self-employed businesses were reported to have been shut down during the pandemic, stood at around seven monthsThe median figure was eight months. (cumulatively, since the beginning of March 2020). It should be noted that a sizable share (30%) reported having closed their business for eight months since March, and that 26% reported having closed for a total of 9–10 months over the same period. 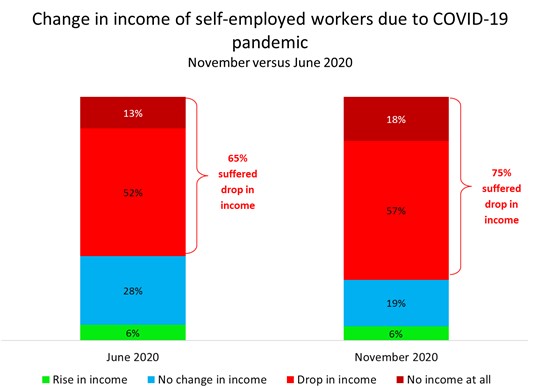 In fact, about two-thirds of employees who worked in November (66%) report that their wages were not affected at all, compared with only about 19% of the self-employed.

Among those reporting a drop in income in November 2020, the drop among the self-employed was greater than among employees who worked - 47% compared to 24% among employees. 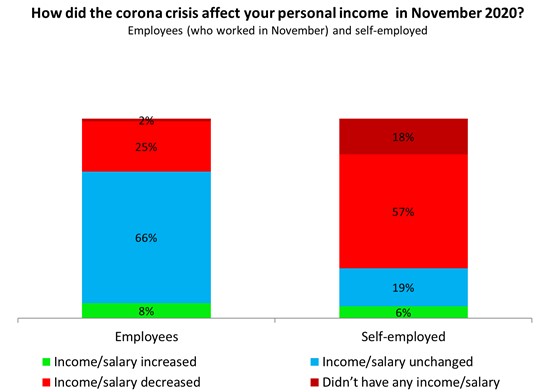 Government aid: Survey respondents were shown that up to now, three kinds of government assistance had been offered to self-employed workers or shareholding employees whose businesses had taken a hitGrants were allocated to businesses with a drop of at least 40% or 25% in their business turnover during the relevant period, relative to the previous year. by the pandemic:

1. Grants provided on the basis of the drop in personal income (safety net grants)—a bi-monthly payment of up to NIS 15,000 for two months.

2. Grants toward covering expenses of self-employed workers, to cover fixed expenses that they were required to pay even during a lockdown or when their business activity was severely curtailed.

Analysis of the responses revealed that as of the beginning of December, most self-employed workers (around 60%) had applied for some form of government aid (one of the three options described above), and around 36% had applied for more than one option.

Some 48% of self-employed workers applied for the grant provided on the basis of a drop in income, and the vast majority of these (91%) received the grant for which they applied.

45% applied for a grant to cover expenses, and here too, the majority (78%) had their application approved.

Only 6% applied for a full or partial exemption from municipal tax payments. Since this is a very low percentage, while we can note that the majority of these also received a positive response, the sample is too small to support solid conclusions.

Survey findings indicate that on the average, the "safety net" grants to self-employed workers or controlling shareholders since the beginning of the pandemic stand at NIS 21,875, with a median of NIS 15,000 (not including the general grants paid to all Israeli citizens). On the average, the sum of NIS 21,875 reflects around 36% of all personal income from the worker’s business.

Of the self-employed workers who received a grant toward covering expenses, the total average amount since the beginning of the pandemic was NIS 11,673, which constituted around 37% of the total fixed expenses during the relevant period.

Less than one-tenth (around 9%) of self-employed workers received a full or partial exemption from municipal tax payments, while 75% received no exemption at all, and some 16% said they did not know whether they had received such an exemption or not.

Only 11%–12% used the services of a professional in order to apply for and process their grants.

On average, the length of time between applying for and receiving a grant, was 7.7 days, while around one-third of respondents received grants on the day they applied, and 81%--within a week.

Some 50% of self-employed respondents characterized the process of accessing grants as "simple" or "very simple", while only 25% reported that it was "complicated" or "very complicated", and the remainder (25%) provided a neutral response (neither simple nor complicated).