Most Israelis think that their country's international standing has either remained the same as it was under former Prime Minister Benjamin Netanyahu (37%) or improved (28%) since Prime Minster Naftali Bennett and Foreign Minister Yair Lapid assumed office.

* This month saw a sharp decline in the public’s optimism about the future of democratic governance in Israel and a slight rise regarding the future of national security. Only about a third are optimistic in the former sphere and about half in the latter one.

* The decline in the rate of optimists on the future of Israel’s democratic governance is indeed especially marked in the right-wing camp, but the left-wing and centrist camps, too, are “losing altitude.”

* A majority of the public as a whole believes the government will succeed to pass the 2022‒2023 budget in the Knesset and so will not fall.

* On this question we found a very large gap between Jews and Arabs: the Arabs assess the degree of friendliness of all the organizations and states as higher than the Jews do.

* An analysis of the three political camps yields a similar result: the left views the states and organizations we asked about as friendlier toward Israel than do the other two camps.

* The public is divided on the need for a military broadcast station like Galei Tzahal. There is also no clear public position on whether the station’s broadcasts are currently politically neutral or biased to one side or the other.

After four months in which the degree of optimism about the future of democratic governance in Israel was quite stable, this month saw a significant decline (from 48% to 35%); that is, only about a third of the interviewees are optimistic about the future of Israeli democracy. However, a slight increase occurred in the public’s optimism about the future of Israel’s national security compared to the previous months, and at present about half of the public are optimistic. This is still, however, a lower rate than those that were measured from January 2020 to April 2021.

A segmentation of the degree of optimism about the future of Israel’s democratic governance since February 2021, from the elections to the 24th Knesset until the present, reveals great volatility in the Jewish public according to political camp. On the right, optimists were a majority before and immediately after the elections, but after the new Bennett-Lapid government was formed the optimism waned and it has remained relatively low. This month, apparently in tandem with the assessment that the government will be able to pass the budget and will not fall in the near future, saw the lowest rate of optimism measured in this camp: less than a third of the right are optimistic. In the center and on the left, a reverse process occurred; while up to May 2021 only a minority in these political camps were optimistic about the future of democracy, after the emergence of the new government a substantial rise occurred in the degree of optimism, with the peak being reached in July 2021 about a month and a half after the government’s establishment (71% of the left and 64% of the center were then optimistic about democracy’s future).

However, since that measurement the degree of optimism has steadily decreased in those two camps, and at present only about half of the center (49%) and less than that on the left (38%) are optimistic; in other words, even if reasons for the pessimism are different, these camps have converged somewhat in their degree of pessimism about the future of Israeli democratic governance.

Optimism about the future of democratic governance in Israel, February 2021‒October 2021 (%, Jews, by political camp)

As for the Arab public, in all the recent months only about a third have been optimistic about the future of Israeli democracy, with particularly low values measured in May after Operation Guardian of the Walls (25%). With the formation of the Lapid-Bennett government a certain increase occurred in the degree of optimism (40%‒42%), but this month it disappeared and only 29% responded that they were optimistic. Particularly notable is the low degree of optimism among voters for Ra’am (25.5%), which is part of the current coalition.

Will the Budget Be Approved?

Sure or think the government will succeed to pass the 2022‒2023 state budget (%, entire sample, by voting in the latest elections)

One of Prime Minister Netanyahu’s strong points was his strong status, and, as a result, Israel’s status as well in the international arena. We wanted to know how the public perceives Israel’s international status at present under the leadership of Naftali Bennett and Yair Lapid. We asked: “Prime Minister Bennett and Foreign Minister Lapid are investing great effort in strengthening ties with international leaders and explaining Israeli policy. In your opinion, is Israel’s current status in the international arena much better, moderately better, the same as it was, a little worse, or much worse?” Among the Jews, we found, the most common position (37%) is that no change has occurred in Israel’s international status, while almost the same rate thinks it has improved or deteriorated (27% say it has improved and 30% that it has deteriorated under Bennett and Lapid). In other words, the Jewish public does not hold a single clear impression of the situation in this regard. The distribution among the Arab interviewees is similar, though slightly more positive: 40% consider that the status has not changed, 30% that it has improved, and 23% that it has worsened.

A segmentation of the responses to this question by political camp (Jews) yields a clear picture: on the left there is a sense of improvement, in the center there is equivalence between those who see an improvement and those who believe Israel’s international status has remained as it was, while on the right there is a majority for those who assess that the status has worsened.

“In your opinion, is Israel’s current status in the international arena…” (%, Jewish sample, by political camp)

Who Is an Enemy and Whose Is a Friend in the International Arena?

Every few years we try to map Israelis’ attitudes toward international entities and different countries of the world in terms of their friendliness or hostility toward Israel, against the backdrop of the changes in the international arena. This time we looked into ten organizations and states. The most friendly among them turned out, not surprisingly, to be the United States, toward which the public’s uncertainty is also the smallest (only 3% chose the “Don’t know” option). The entity perceived as the most hostile is the United Nations. Among the Arab states (Egypt, Jordan, and Morocco), Morocco is perceived as the friendliest.

Is each of the following organizations and states friendly or hostile toward Israel at present? (%, entire sample) 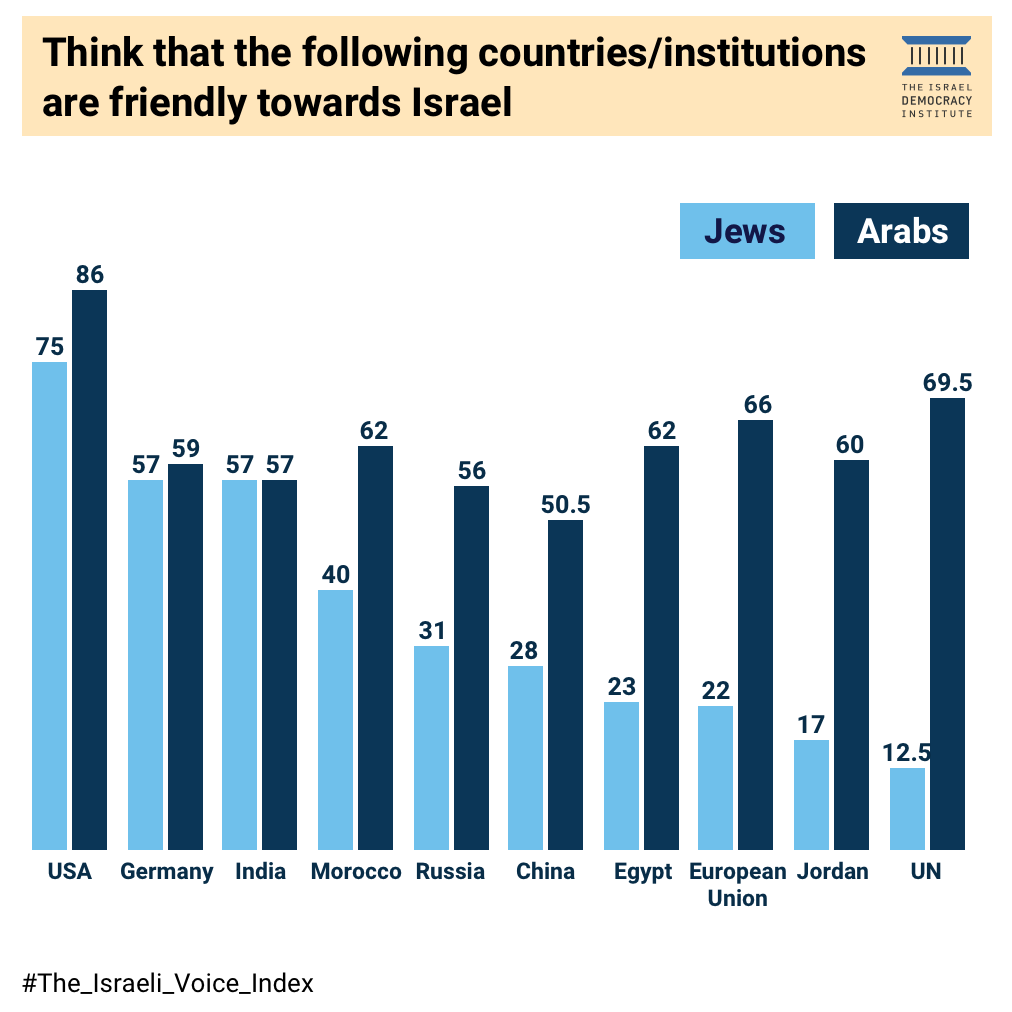 We found, however, large gaps between Jews and Arabs in this regard. The Arabs ascribe to all of these entities a much higher degree of friendliness toward Israel than the Jews do. Only in the case of India are the Arabs’ and the Jews’ assessments the same, and they are similar as well regarding Germany.

Think each of the following organizations and states is friendly toward Israel at present (%, Jews and Arabs)

A segmentation of the Jewish sample by political camps shows that in all of the camps the US comes out on top, though with considerable disparities, while for all three camps the UN is the least sympathetic entity. Generally the left, somewhat like the Arabs, looks more positively upon all the entities compared to the center and the right; that is, it sees the world as friendlier toward Israel than do the other two political camps.

Think each of the following organizations and states is friendly toward Israel at present (%, Jews, by political camp)

Galei Tzahal – All the Time?

At the same time, a segmentation of the Jewish sample by age turns up such a majority among young people (18‒24) – 56%, compared to a minority among the other age groups.

Is there a need today for a military broadcast station? (%, Jewish sample, by age)

Are Galei Tzahal’s broadcasts neutral or do they tend to the political right or left? (%, Jews, by political camp)

Is there a need today for a military radio station? (%, entire sample, think/are sure there is a need, by degree of neutrality)

The Israeli Voice Index for October 2021 was prepared by the Viterbi Center for Public Opinion and Policy Research of the Israel Democracy Institute. In the survey, which was conducted on the internet and by telephone (supplements of groups that are not sufficiently represented on the network) from October 24 to 27, 2021, 602 men and women were interviewed in Hebrew and 150 in Arabic, constituting a representative national sample of the entire adult population of Israel aged 18 and older. The maximum sampling error for the entire sample was 3.59%± at a confidence level of 95%. The fieldwork was done by the Midgam Institute. For the full data file see: Data Israel.