Israel refuses to officially disclose the identity of the states to which relocation takes place. 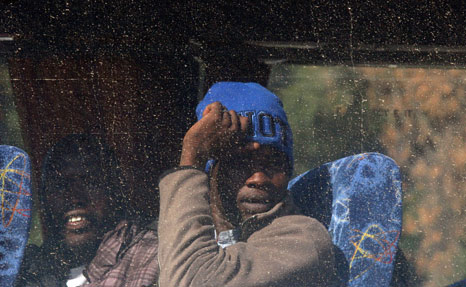 On November 8, 2015, Judge Rachel Barkai of the Beer-Sheva District Court rejected (Hebrew) a petition (Administrative Appeal 5126-07-15 Zegete v Ministry of the Interior) filed by two Eritrean asylum seekers and six Israeli NGOs against Israel’s policy concerning rejected asylum-seekers and irregular migrants who have not (yet) applied for asylum and who - according to the state’s determination - cannot be refouled to their state of origin. Notably, asylum recognition rates in Israel stand at 0.17 percent for Eritreans (and 0% for Sudanese); these figures can be starkly contrasted with the recognition rate in the UK (report) which, albeit falling from 81%, still stands at 64% (in tandem, the appeal success rate has arisen from 37 to 72%). Concomitantly, such persons are not granted subsidiary or complementary protection under Israel’s asylum regime (see discussion).

The state’s contested policy authorizes the Population, Immigration and Borders Authority (PIBA) to issue to persons belonging to the above categories notifications that require them to ‘voluntarily’ depart for a third state; after 30 days, those who refuse shall be deemed to be non-cooperative with their deportation and consequently be detained at Saharonim indefinitely (that is, until they agree to leave or the situation in their state of origin changes so that they can be removed). The presumed legal basis is section 13F(B)(1) of the Entry to Israel Act 1952, which stipulates that ‘an illegal resident shall not be released on bail if his or her deportation is forestalled or prevented by lack of full cooperation on his or her part, including with regard to clarifying his or her identity or administering the procedures of his or her deportation.'

A petition challenging the policy at its inception was dismissed in May 2015 as the District Court deemed it premature (54836-04-15 Hagos v Ministry of the Interior). The Hotline for Refugees and Migrants collated testimonies of persons who "chose" to leave pursuant to the policy; according to its report (where there is no free will), detention, difficulties in renewing visas, hate crime, and racism were the main reasons invoked by those who opted for "voluntary" departure.

Israel refuses to officially disclose the identity of the states to which relocation takes place; it does so pursuant to a confidentiality document signed by Israeli Prime Minister Benjamin Netanyahu dated March 30, 2014 (Hebrew) noting that "in [Netanyahu’s] opinion, revealing the identity of the States, their willingness to assist, and the details of the agreement may harm Israel’s foreign relations." Hence, the judgment did not refer to the states by their names, but rather as "State U" and "State R" (Uganda and Rwanda).

In her judgment, Judge Barkai found that the policy does not violate the principle of non-refoulement (which the Israeli Supreme Court has found in HCJ 4702/94 Al Tai to be binding on state authorities) as petitioners had not met the evidentiary burden to prove that their liberty and well-being would be jeopardized were they to agree to be relocated. The judgment was made notwithstanding the presentation by the petitioners of affidavits based on testimonies collected by the human rights organisations whose researchers visited Uganda demonstrating the legal and social predicament pursuant to relocation.

In September 2015, the International Refugee Rights Initiative published a report based on the testimonies of more than 20 relocated persons. None of those interviewed had been officially accepted at their destinations, and in some cases they were being prevented from applying for asylum in their destination states or were threatened not to do so. They were vulnerable to arrests by the authorities and abuse by smugglers, and therefore many felt they had to leave their destination states shortly after their arrival.

In contrast, Israel has argued that, since April 2015, a PIBA representative has tried to contact 163 relocated "infiltrators" (the term used in Israeli law to refer to such persons), and was able to contact 48 of them, none of whom allegedly raised concerns. Judge Barkai held that the affidavits (above) were unreliable, and that confidential information presented by the state ex parte reassured her that "lessons have been learned." For instance, the state is now committed to guaranteeing that relocated persons would retain their transit document until they receive a permit in their destination state, whereas previously such permits were taken from them upon arrival. The court has effectively raised the burden of proof on petitioners to a level that will be virtually impossible to meet, both logistically and as it could endanger those testifying and identifying themselves whilst living undocumented in the destination states.

Notably, Judge Barkai recommended that, notwithstanding her judgment, implementation of the relocation policy be put on hold for several months to facilitate assessment of the implementation of a new monitoring mechanism. She also ordered that the temporary injunction which Supreme Court Judge Vogelman issued during the proceedings, preventing the state from implementing its policy by detaining the applicants and others in their position, remain in force until November 29. On that day, the petitioners launch an appeal (Administrative Appeal 8101/15) to the Supreme Court.

In ‘No Asylum for Infiltrators’, I explored the legal predicament of Eritrean and Sudanese nationals in Israel, who make up 92 percent of asylum-seekers in Israel; the state’s explicit aims are to prevent their settlement and encourage their departure. Elsewhere, I argued that these legislative aims are incompatible with Israel’s treaty obligations under the 1951 Refugee Convention. Unfortunately, the state’s obliquely labelled ‘Rwanda or Saharonim’ policy forms an integral part of its persistent punitive approach towards African asylum-seekers.