In this memoir, Prof. Yedidia Stern recounts the murder of Prime Minister Yitzhak Rabin and calls on the Israeli public to turn that horrid day into an annual “Israeli Democracy Day." This article was first published in the Jerusalem Post. 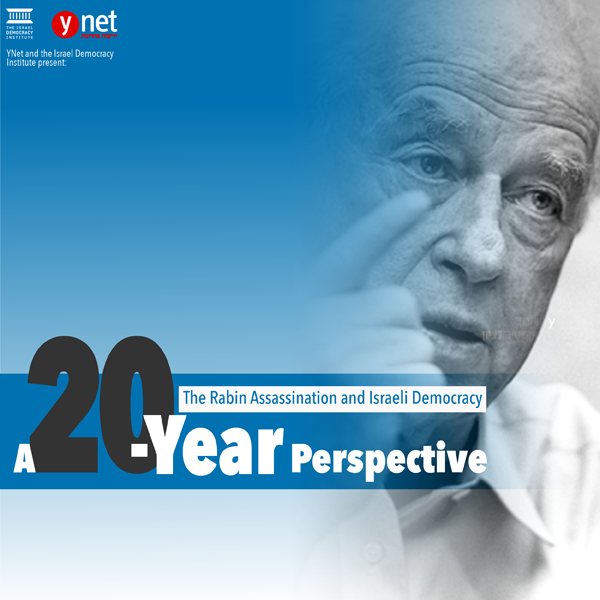 Twenty years ago, my life was turned upside down. Beyond the national trauma that all Israelis experienced when Yitzhak Rabin was assassinated, my turmoil was compounded by the realization that the murderer was a student at the law faculty where I was dean. Something clearly had gone very wrong. For the first time, I felt that the State of Israel into which I was born is not immune to the destructive forces that led to the loss of our national independence during the Second Temple period. This concern has not been allayed by Israel's collective national experiences in the years since.

The memory of the Rabin assassination is fading and we are losing a valuable tool for promoting important national goals. One reason for this is that Israelis use the memory of the assassination as part of the political and ideological dispute between different camps and sectors—left vs. right and secular vs. religious. Thus, for example, the 2015 Israeli Democracy Index found that approximately half of Israelis believe that the left also contributed to the deepening of the rift in Israeli society after the assassination by accusing the right and the religious community of being responsible for the murder. As a result of the bashing between these groups, some members of the national religious community today minimize the importance of the annual memorial day for Yitzhak Rabin, and see it merely as a platform for promoting leftwing political views that they find unacceptable.

The memory of the Rabin assassination, however, is too important to be abandoned. National thinking is necessary in order to move Rabin's memory from the realm of controversy to consensus and turn it into a constructive force. This can be achieved by creating a partnership in which all Israelis can join together in preserving the memory.

The Israeli calendar is derived from the Jewish calendar, as is appropriate for a Jewish state. It moves from the introspection of the High Holidays, the heroism of Chanukah, the celebration of freedom on Passover, through the national mourning of Tisha B'Av. All Israeli holidays commemorate some kind of religious, national, or cultural event; there is not a single civil holiday that can be shared by all the people of Israel. Only one day— Yom Haatzmaut, Israel Independence Day—celebrates the state itself. This day, however, is not a holiday for all Israelis, since Arabs and ultra-Orthodox Jews, who constitute one third of Israel's citizens, do not see it as a day of celebration.

Transforming the annual Memorial Day for Yitzhak Rabin into "Israeli Democracy Day," can fill this void. Israel's rich and tumultuous public agenda emphasizes differences, divisions, disputes, and crises. It is imperative to dedicate a day to the common ground that unites all members of Israel's tribal society. The fifth of Iyar will continue to be Yom Haatzmaut, the day on which we celebrate Israel's independence and sovereignty; the 12th of Heshvan, however, when Yitzhak Rabin was assassinated, will be Israeli Democracy Day, a day devoted to civics and the celebration of our shared citizenship as Israelis.

The democratic experience is rich and meaningful. Creative thinking is needed to highlight its color and diversity. On the proposed Democracy Day, we will celebrate Israel's well-deserved pride in being the only democracy in the Middle East in school curricula, celebratory texts, special broadcasts, prayers in synagogues and mosques, and an annual "State of Israeli Democracy" address by the Israeli prime minister.

When we mourn the loss of a loved one, we try to process the event, soften its impact, and find ways to heal, so as to continue living a normal life. This is the natural way of the world. But the murder of a public figure—the prime minister of the State of Israel— must not be forgotten. If we are wise enough to fuse this loss with a broad attempt at public repair, perhaps the coming generations of Israelis will be able to attest that however great Rabin's contribution to Israeli society may have been during his lifetime, his contribution after his death was greater.

A version of this article was published in The Jerusalem Post on October 19, 2015.