The Index finds that over past decade: significant decrease in the rate of optimists regarding the future of the country and a decline in public trust in state institutions | Among Jewish Israelis: 85% Place Trust the IDF | Only 8.5% Trust Political Parties

For the past twenty years the Israeli Democracy Index has striven to fulfill its raison d’être – “to evaluate the quality and functioning of Israeli democracy by collecting quantitative comparative data that are as comprehensive, precise, clear, reliable, and valid as possible.” This year’s Index continues to build on this legacy by promoting informed, in-depth public discourse about the state of Israeli democracy and thus contribute to bolstering it.

President Isaac Herzog: "From the moment I was elected President, I have made the disputes and rifts within Israel society one of my most urgent priorities. I am therefore deeply worried about three points in the report presented to me today: the erosion of solidarity in Israel, the weakening of the sense of belonging to the country, and the decline in optimism about our condition. These are unpleasant figures, which come on top of other sections of the report that reflect the internal tensions within us. In other words, our cohesion is being weakened, and we must do everything to rebuild it.

"I believe that the right way starts with responsibility. The responsibility of each and every citizen, and even more so, our responsibility as elected officials. I intend to continue working and devoting my best efforts to this issue. Solidarity and a sense of belonging are critical for our resilience, and we must work hard to reinforce and strengthen them, day by day, hour by hour."

Yohanan Plesner, President of the Israel Democracy Institute: “The data in the Israeli Voice Index is clear: there is no majority for initiatives that that seek to weaken the Supreme Court and diminish the judiciary. The legislative package advanced by the Justice Minister will lead to a judiciary controlled by the executive branch, decimate the separation of powers in our democracy, and prevent the Supreme Court from defending the rights of individual citizens.  Israeli from all walks of life should speak out against these one-sided reforms.

What is needed now are leaders from across the political spectrum who can come together and seek reforms that can lead to a constitutional compromise based on the counsel of leading experts and a broad consensus among Israelis. Such a compromise would instill stability in our political system, lessen the polarization in our society, and strengthen Israel’s democratic institutions and values.”

Prof. Tamar Hermann, Director of the Viterbi Family Center for Public Opinion and Policy Research at the Israel Democracy Institute: “The 2022 Israeli Democracy Index—our twentieth—not only reports this year’s data, but focuses on a longitudinal analysis of topics that have been examined over the years. This allows us to showcase long-term trends of stability as well as change in Israeli society, and present decision-makers with the classic rhetorical question of ‘where we have come from, and where we find ourselves today?’

It is apparent from the 2022 Index that the increased fragmentation of the public's positions on policy has reached a point where it is no longer clear whether there remains a shared Israeli base on questions of principle, or even on practical questions regarding the country’s day-to-day conduct. Over the past two decades there has also been an erosion of public attitudes regarding basic principles of democracy, especially among Jewish Israelis, regarding civil equality. In addition, there has been a clear decline in the desire to seek a balance between Israel’s dual Jewish and democratic characteristics. With the exception of the secular public, among the majority of Jewish Israelis today there is a growing preference to put more of an emphasis on the country’s Jewish character.” 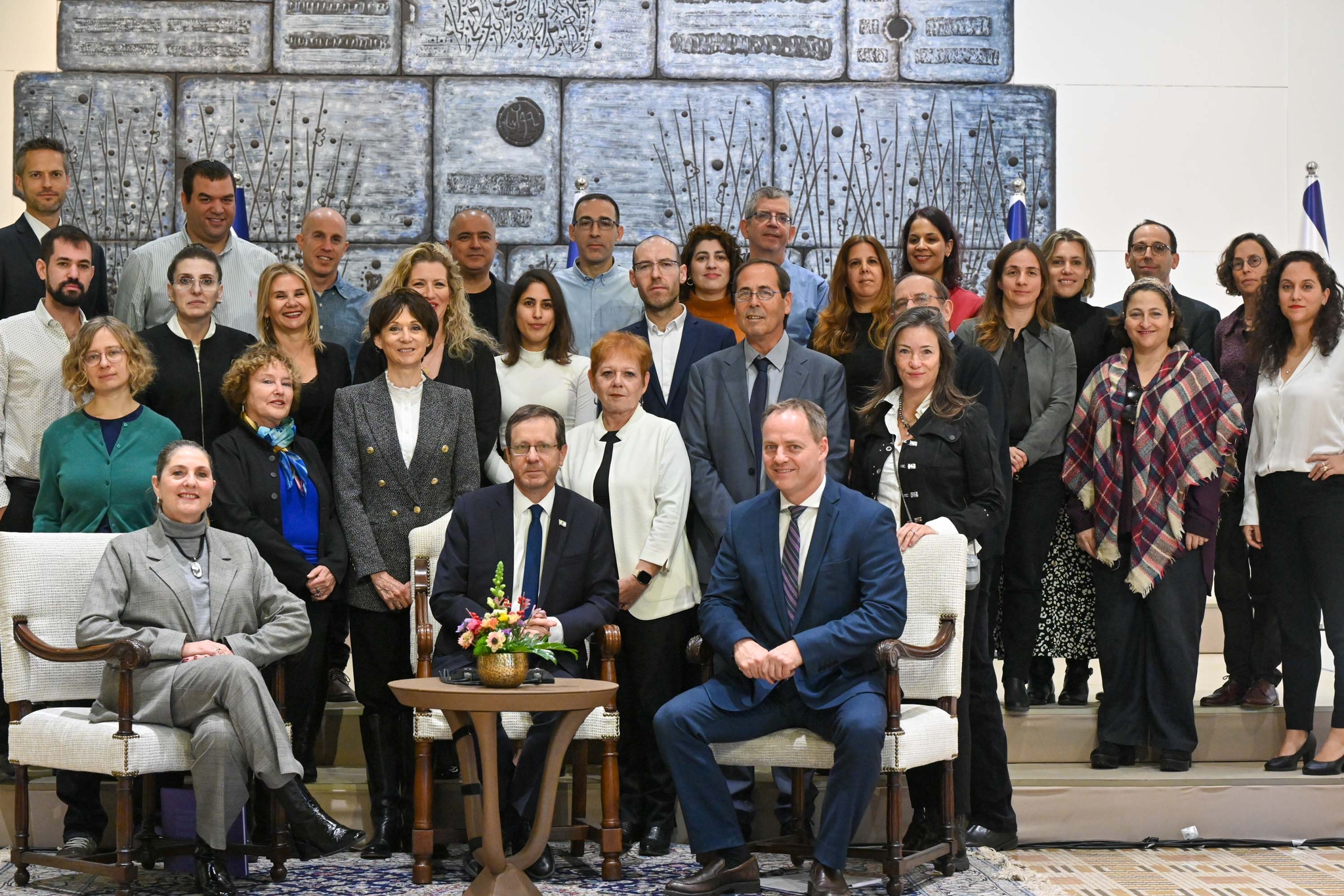 There is a significant overlap between religiosity and political orientation. In all the religious groups a majority define themselves as being on the Right, with the exception of the secular group, which is divided fairly evenly between the three political camps.

Optimistic about the future – 49% of Israelis are optimistic about Israel’s future – down from 76% in 2012. Multi-year averages show that the proportion of optimists in the Jewish public (67.6%) is much higher than in the Arab public (48%).

The percentage presented in 2022, unless otherwise stated, refers to the average between the June and October surveys.

In the past decade average trust in all eight of the measured insittutions has dropped dramatically to 33% - down from 61% in 2012.

Yearly average levels of trust in all the institutions as a whole, compared with overall multi-year average (47.8% less than half) (trust quite a lot or very much; total sample; %)

Human Rights Organizations – 66% of Israeli Jews think that human rights organizations cause damage to the state – among Israeli Arabs only a minority share this view (35%). Segmentation by political camps reflects a high variance between groups – 80% on the Right, 57% in the Center and only 17% on the Left agree.

Privileges – Around half (49%) of Jewish Israelis agree that “Jewish citizens of Israel should have more rights than non-Jewish citizens” (up from 27% in 2018). Segmentation by political camps here as well reflects a high variance between groups – 62% on the Right, 35.5% in the Center and only 11% on the Left agree.

Agree that decisions crucial to the state on issues of peace and security and on issues of economy and society should be made by a Jewish majority (Jews, %)

When asked which component should be the dominant one – among Jews 43% said the Jewish element, 30% both elements equally and only 26% the democratic element.

Discrimination – A multi-year average shows that a majority (78.4%) of the Arab public feel that Arabs are discriminated against in Israel, whereas only 49.1% (multi-year average) of Jewish Israelis think likewise. Among the Jewish population there is high variance in the political segmentation – 82% among the Left, 48% among the Center and only 16% among the Right agree.

Politicians’ Motivation – multi-year average shows that Jewish and Arab Israelis agree that politicians are more concerned with their own interests than with those of the public that elected them (79.3% and 73.1% respectively).

Repeal of laws by the Supreme Court - in 5 measurements, over more than a decade, an average majority of 55.6% among Israelis, support the Supreme Court having the authority to rescind laws passed by the Knesset, if they are found to be contrary to the principles of democracy. Among Arabs, the support for this is much higher than among Jews (87% compared to 51%). Segmentation among Jews according to political camps showed a majority of supporters on the left and center (89% and 70%) compared to a minority on the right (37.5%).

In 2022 A majority (56% among Jews and 71% among Arabs) agrees the Supreme Court should have the power to overturn laws passed by the Knesset if they are found to contradict democratic principles.

Agree that the Supreme Court should have the power to overturn laws passed by the Knesset, if the are found to contradict democratic principles (Total sample, %)

Comparing Israel’s scores for 2021 with its multi-year averages over the last two decades (2003–2020) yields a relatively balanced picture. In five indicators, Israel scored higher in 2021 than the multi-year average, and the two most substantial increases were found in political participation (with an impressive surge of 15.9%) and participatory democracy (with an upturn of 4.8%).

The 2022 Democracy Index was prepared by the Viterbi Family Center (formerly known as the Gutman Center) for Public Opinion and Policy Research of the Israel Democracy Institute.

In the survey, which was conducted on the internet and by telephone (supplements of groups that are not sufficiently represented on the network) from May 22-June 21, 2022, 1,092 men and women were interviewed in Hebrew and 219 in Arabic, constituting a representative national sample of the entire adult population of Israel aged 18 and older. The maximum sampling error for the entire sample was 2.76%± at a confidence level of 95%.

The fieldwork in Hebrew was done by CI Market Research and in Arabic by Afkar Research and Knowledge For the full data file see: https://dataisrael.idi.org.il

Some of the survey questions were asked again at the end of October 2022 by the Midgam Institute.