Nineteen years after the murder of Prime Minister Yitzhak Rabin, IDI Vice President Prof. Mordechai Kremnitzer explores the background, meaning, and ramifications of this event, taking a hard look at some of the dangers he sees in Israeli society today. 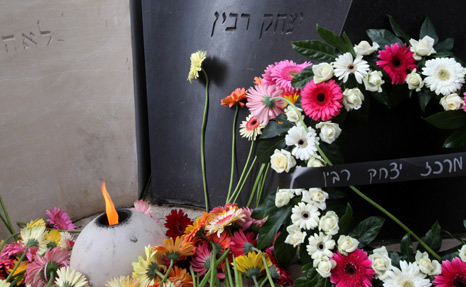 Nineteen years have passed since Yigal Amir murdered Prime Minister Yitzhak Rabin. Both for political reasons and for the sake of national unity, Israeli society has avoided a fundamental and straightforward examination of the background of this event, its meaning, and its ramifications.

But unity cannot be based on whitewash or on false symmetry between left and right. And so, in the following lines, I will engage in the kind of inquiry that is necessary.

A political assassin like Yigal Amir must have a brazen ideology, a group to represent, and a public climate that ensures that there will be varying degrees of support for his action. Viewing the assassination as the act of a lone wolf, a lunatic, or a "stray weed" fails to consider the background of this event and thus misses what could lead to the next political assassination.

The Rabin assassination strikingly demonstrated, not for the first time, the devastating potential that religious zealotry has when mixed with extreme nationalism, against the backdrop of the occupation and the settlement enterprise in Judea and Samaria. When people see the sanctity of the entire Land of Israel and the ban on transferring any part of Israel to non-Jews as absolute values that do not have to be weighed against competing values, the murder of a leader who threatens these tenets is almost an imperative. Alongside this radical outlook, the position that the future of the territories should not be determined by the political system grew stronger. Such views rule out from the outset any political solution that would involve evacuating Jewish communities, for fear of violence or the possibility that soldiers will refuse to carry out government orders.

The mixture of religious extremism and radical nationalism explains the logic behind the madness. This is the ground that gave rise to Baruch Goldstein, Meir Kahane and his followers, the "Jewish underground," price tag attacks, and the recent wave of racist violence. It is also the fertilizer that nourished Yigal Amir and his supporters.

Israeli public discourse is characterized by extraordinary polarization. On the one side are those who believe that the establishment of a Palestinian state alongside Israel is a moral imperative and a vital national interest; on the other are those who see the establishment of such a state as a catastrophe, whether for reasons of ideology, values, or national security. In the extreme right, alongside the religious worldview, a secular narrative has taken root that sees the Palestinians, by their very nature, as the eternal enemy of the State of Israel and its Jewish inhabitants; this view sees Israel's control of Judea and Samaria as justified and views any effort aimed at a peace agreement as dangerous folly. This view also makes it permissible to treat Palestinians—including those who are Israeli citizens—as if they are sworn eternal enemies. The despair and hatred sown by this view undermine the very foundations of Israeli democracy.

Each side in Israel sees the other’s position as a distortion and an existential danger. It is essential that this debate be conducted with tolerance towards the intolerable position of the other side. In recent years, however, the radical right has worked to stifle the opposing viewpoint. The Boycott Law, the Nakba Law, the attempts to clip the wings of the Supreme Court and limit civil-society organizations, and the moves to restrict the activity of Arab members of Knesset all illustrate the attempt to end arguments by intimidating and silencing political adversaries.

Since this matter has never been examined thoroughly, there has not been a change in the State Prosecutor’s policy toward tolerating incitement to racism and even murder. The decisions of the State Attorney's office to avoid prosecution in the cases of Rabbi Shmuel Eliyahu, who penned a letter saying that Jews should not rent apartments to Arabs, and the rabbis who authored Torat Hamelekh, a book of Jewish law that discussed the permissibility of killing Arab children because they will grow up to be a threat to Jews, are a badge of shame for Israel's law-enforcement system and for Israel as a Jewish state.

We also never learned the necessary lessons regarding what is needed in the Israeli education system. Israeli schools, in all sectors, do not do enough to immunize students against prejudice, feelings of national superiority, hatred of the Other, and racism.

The wave of racism that reached an unprecedented high during Operation Protective Edge—backed by Israel's national leadership (sans the President), whether tacitly or overtly—must serve as an urgent wake-up call for us all.

During the two decades since the assassination, however, it seems that precisely the opposite lessons have been learned. The law that bars family reunification for Palestinians and the Defense Minister’s recent decision to ban Palestinian workers from buses that transport Jews in the West Bank attest to an unbearable willingness to give in to security considerations, even if they are imaginary, at the expense of defending the human rights of Israeli citizens.

It was not only Yitzhak Rabin who was murdered. The banners he waved are being trampled underfoot: the preference for peace over war, a genuine commitment to national security and peace with our neighbors, and the understanding that we have the power to change the situation.
The radical right sees Rabin’s brand of Zionism—confident in its path, sober, refusing to be led astray by false visions—as anti-Zionism. The commitment to cultivating Israel's relationships with its friends in the international community and the profound recognition of the limits of physical force, which were the hallmarks of Rabin's political thought, have been abandoned. His domestic legacy—which emphasizes investment in education as vital for societal resilience and the inclusion of Arab citizens of Israel as political partners on the road to peace—has been left by the wayside as well.

My hand trembles as I write what follows: The Rabin assassination was a political event that wreaked a deep and dramatic change in the situation in Israel and may even have tipped the balance completely. It is hard to think of a political assassination that had a greater payoff. That is why the temptation to commit another assassination—should potential killers deem it necessary—is so great.

Yitzhak Rabin was not perfect. As a leader, he had foibles and weak points and he was not infallible. For this reason, we do not devote Rabin Memorial Day to a cult of personality. But it is impossible not to long for some of his other attributes, both as a human being and as a leader: his willingness to take personal responsibility (whether for his wife’s foreign bank account or the failed rescue of Nachshon Wachsman), his lack of arrogance, his readiness to listen and change, his directness, his credibility, and even his weak oratory. This is why I miss Yitzhak Rabin so much and why, as time passes, I miss him even more.

This article was published in Hebrew in Haaretz on November 7, 2014.