Rabbi Yitzhak Ben David shares thoughts on the alignment of the Memorial Day for Yitzhak Rabin on the Gregorian and Hebrew calendars 19 years after the assassination, which challenges us to find a renewed reconciliation between Israeli democracy and Jewish civilization. 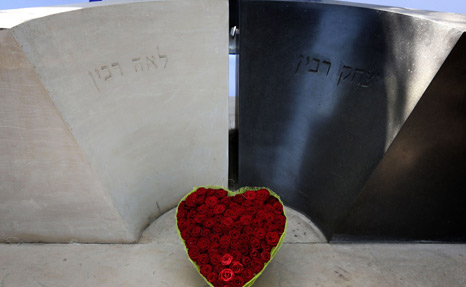 This year, we mark 19 years since the murder of Yitzhak Rabin. At first glance, this year's Memorial Day simply marks another routine year of memory just before next year's 20th anniversary, a day that seems no different than the other Rabin Memorial Days of the last two decades.

But there is something unique about this year nonetheless. It is the first time since the assassination that the Hebrew date of the murder coincides with the Gregorian date of the assassination—the bitter, fateful event, which threatened to cruelly tear apart the fabric of life in this country, where we have re-established Israeli sovereignty with great effort.
The graves of Yitzhak and Leah Rabin on Mt. Herzl

During the years since the assassination, there has been open debate and covert conflict in Israel over which calendar should be used in setting the date for the official observance of Rabin Memorial Day. According to one view, the memory of the murder is part of the agenda of civil society in the modern state of Israel; accordingly, the assassination should be commemorated on the civil calendar as an event that took place on November 4th.

According to the other view—the view that was officially adopted by the State of Israel—the day of Rabin's assassination should be integrated into the Jewish calendar, and should become an organic part of the spectrum of Jewish history and tradition, both ancient and renewed.
The debate about the calendar, of course, reflects deep questions about the politics of identity in Israel, and about the ethos of memory that we seek to create around the assassination.

Those who sought to adopt the Gregorian-civil date, reflected their desire to move away from the Jewish dimension of the assassination, or blur this aspect of the event. This desire was part of the sense that many people had that the assassination itself represented the high price that the State of Israel must pay for its strong affinity to Jewish heritage and the complex and problematic concepts that it contains (e.g., the law of a pursuer, the prohibition against giving territories to non-Jews, etc.) For them, the conclusion that must be drawn from the assassination is that there is a need to strengthen the civic identity of the State of Israel and to weaken the connection between the State and its Jewish roots.

This year, when the Hebrew and Gregorian dates of the assassination coincide, invites us to pursue a different mode of discourse—a mode that is based on the desire to find the points at which its possible to truly merge horizons and combine the Jewish dimension of the State with its civil and democratic dimension.

Ironically, there were also people within the religious sector who tried to prevent the assassination of Yitzhak Rabin from being incorporated into the sacred Jewish calendar. Within the religious Zionist community, certain groups suddenly began to commemorate an annual memorial day for Rachel the Matriarch, who died on the same day as the murder, in order to obscure the Hebrew date of the murder to prevent this event from being integrated into the traditional calendar.

We must locate the places where Jewish tradition can consolidate and deepen the democratic foundations of the state, and the moral and legal status of the elected government. Equally important: we must identify ways that will enable the developing democratic tradition of Israel to become a key element in the historic enterprise of Jewish culture and identity throughout the ages.

The great lesson of the assassination, which is that there is a categorical prohibition against influencing the nature of the government by means of violence and bloodshed, must be conveyed within both the religious and secular communities. This message must become a cultural asset, not just of the reborn State of Israel, but also of the rich and ancient Jewish tradition that preceded the establishment of the state.

Nineteen years after the assassination of Yitzhak Rabin, when the 4th of November meets the 12th of Heshvan for the first time since the murder, is a time when we must challenge ourselves to find the renewed reconciliation between Israeli democracy and the Jewish civilization that is deep down in its roots. This reconciliation is critical. We must not let it slip away.

Rabbi Yitzhak Ben David is a Human Rights and Judaism researcher at the Israel Democracy Institute, the director of Midreshet Ein Hanatziv, and a doctoral candidate in law at Bar-Ilan University.